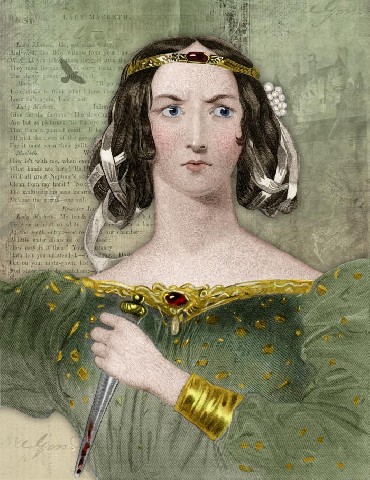 I meet people all the time, everywhere, who are making theater --- people I know, people whose work I know, people doing shows, or wanting to do shows, or "the usual suspects" seeing shows when I'm seeing shows. I like to know, like them to know that theater for me is a living tapestry; the warp is people; the woof is time.

"I'm going to be Lady Macbeth!"

"Wow. So you're here at the BCA rehearsing?"

"No, callbacks! Four of us are finalists."

I was puzzled. "But you really have it?"

She nodded. "I can't miss! I've been Living the play ever since it was announced. I'm psyched! It's Her Play, really! I'm gonna make it 'The Tragedy of Lady Macbeth, Queen of Scotland!' I can't miss."

"Well, there's a little bit about her husband in the play too," I reasoned.

"Oh, HE's nothing; he's so one-dimensional, so obvious. What is he? He's not a king, not a ruler. SHE's the one who really wants the crown, wants the power, wants it enough to kill for it --- because she knows what to DO with power. All he knows is blood --- he's not a king, he's Mubarak, he's Khaddafi, he's Assad! He tries to rule with a sword, and he dies by that sword."

"You think she doesn't?"

"What do you think she's doing, while he's off beating the crap out of the Norsemen? When his letter says he'll be king she knows exACTly what to do --- because she's always Known how ripe the country is for change, and what they have to do to get it. He's too Dumb to see it, but SHE does! He's just her tool. Except he's such a bloody fool all he can think to do is murder everyone who questions his rule --- she makes him king, and he screws it up! That's why she commits suicide."

"Damn right she does! She sees him murder his best friend Banquo, she sees him slaughter Lady MacDuff and everyone in her household, she sees the whole countryside rise up against him --- she sees every shred of serious rule crumble; Of Course she commits suicide! It's off stage, but it's the final act of her tragedy. Everything else is just ... denoument!"

She glanced at her cell. "Now! Gotta go!"

And I went in to see the show. After, I went down to catch the Orange Line home at Mass Station, and she was waiting to go in the other direction.

She frowned. "He said I'm too short."

"...And I read too young. Well, you know his Macbeth, of course, and he's handsome, and athletic, and dumb --- and Tall. I probably don't even reach up to his chin!" She shrugged. "Ya win some, ya lose some, right? I always say You can't Lose them all --- but the Red Sox are out there, every afternoon....."

Her train was approaching as she answered.

"Cordelia. No matter who gets to be Lear, I'm a dead shoe-in. I'm so small Anyone can carry me in at the end of the show!"

The doors closed and she was whisked away into the night.