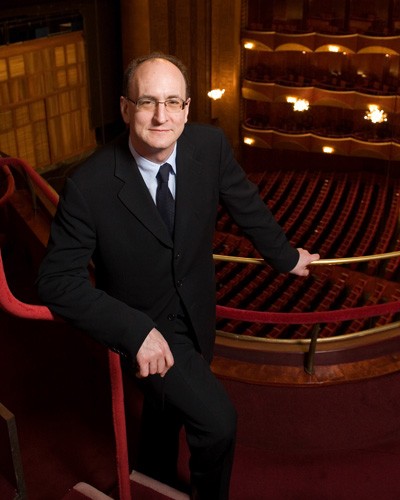 Peter Gelb is currently in complete control of all aspects of the Metropolitan Opera Company.

Opera aficionados who have attended Metropolitan Opera performances in the house this fall have often wondered why they are there.  Under general manager, Peter Gelb, seldom do we experience singers enjoying each other’s company and thrilling an audience.
Aida, the beautiful warhorse, was glued together by Met stalwarts.  The audience, educated in opera or not, sensed they were getting a weak brew. One night Olga Borodina was the only competent cast member.  Like Hampson in last year’s Macbeth, for all she has given music, opera and the Met, she was tasked with carrying a production on her shoulders.  Considering her contributions to the company, this is unacceptable.
The exception this fall was La Clemenza di Tito, which sadly played to sparse houses.
Overall, Met audiences appear to be in decline.  From a bond offering handled by Eric Wild at Morgan Stanley in December you can see how dependent the company is on sales of house tickets.  When they plummet the Met is in real trouble.  So much so, that while the picture of this bond offering is painted as “low interest rates offering an opportunity”  the downward curve of house ticket sales must be part of its impetus.  Moody's Investment Services notes that donor support is the Met’s principal financial asset and also its principal challenge.  (Offering papers available on line through MuniOS.com, The Metropolitan Opera).
Even the much touted, global Live in HD broadcasts do not make up the shortfall. The grumblings of audiences who endure 15 cameras zooming around them in dress rehearsals and live broadcasts may eventually force the Met to offer the audience discounted or free tickets for the broadcast preps and days of performances.  The monetary value of HD broadcasts is impossible to calculate. The degree to which expenses are written off against the productions has never been articulated, even in bond offering documents.
In the bond offering, Gelb is lauded for his many awards as a music producer.  He is reported to hold two honorary doctorate degrees. This is ironic considering that he did not attend college. When I noted this to a prominent educator, she laughed.  “What you learn is college is to compete with your peers.”   To help manage the company, last year the Met had to go far afield to Australia to hire a head assistant in his office.
With the exception of the New York Times, with whom he appears to have a special relationship, Gelb doesn’t speak with the media.  An exception was a report in  “Opera Teen.”  The site (operateen.wordpress.com) published a disclaimer that Gelb’s responses in their interview are taken from his notes and are not necessarily verbatim.
Gelb’s interview with the online site reads like a press release from the Met and may be.  The kind of control any adult, and especially an important one, can wield over a teen, is obvious.  Gelb strives for control of the company and the media because his position as its music and artistic director is so widely debated.
When he sat with The Times for an interview, last spring, he said, “I am the director of productions. I hope you’ll accept that.” The remark raised eyebrows. The Board was ready to appoint an Artistic Manager to compliment Gelb’s marketing skills, and give the new AM equal footing. That didn’t happen.
The Board appears to be skeptical of Gelb’s self-assessment. When Gelb announced the return of James Levine, for the moment the issue rested.  He may have bought himself eighteen months by returning Levine, for one concert of the Met Orchestra at Carnegie in May, and three operas in next year’s season.
When Principal Conductor Fabio Luisi was asked about Levine’s return, he said, “Do not count on me as a replacement when someone can’t show.  Zurich is my opera house.”  One may speculate why Maestro Luisi has hired Mrs. Gelb to conduct La Traviata in Zurich this spring. A distinguished European critic who heard her conduct the opera elsewhere reported:  “Of the 500 pages of the conductor’s score, Wilson (Mrs. Gelb) batted zero.”
While Levine’s return is encouraging, ongoing health issues and extended absences indicate that he is not a long term solution as either Artistic or Music Director.  Given a delicate situation Levine is unlikely to challenge Gelb’s questionable artistic decisions.
Until the Met secures a bona fide, respected, long term replacement for Levine the current turbulence will prevail. Without proper checks and balances Gelb will remain in complete control of all aspects of a world renowned company both on stage and in the closed doors of the Board room. While the Live in HD broadcasts have given the Met an enthusiastic global audience what looks great on camera is not always that wonderful for the ever smaller audience members willing to pay staggering ticket prices for seeing so-so opera productions live on stage.  The Met needs this revenue from the House sales.
Eventually, with a new Music Director of the status of the much missed Levine, a new broom will sweep clean. By then the company may well require triage. As things stand Gelb is not in a hurry to see that happen.
Back to Music Section Home