The Fall and Rise of the Uilleann Pipes Tradition 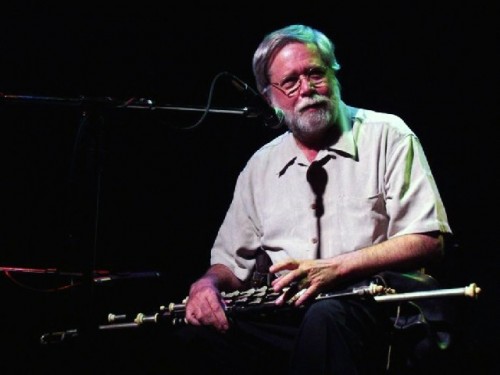 Patrick Sky performing at the Dave van Ronk Memorial Concert in 2002. Photo by and courtesy of Michael W. Lurie. 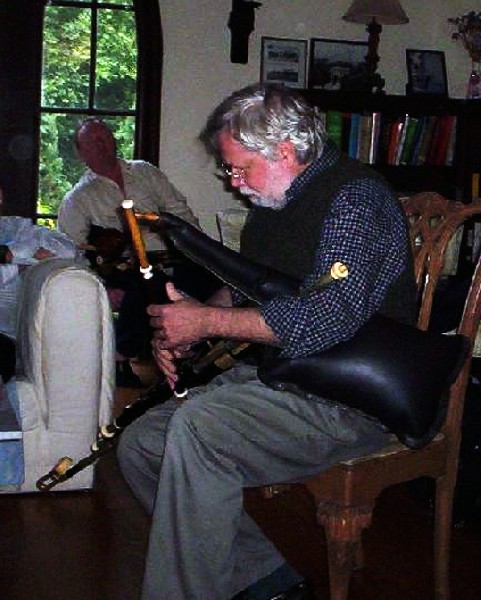 Pat performing at a Tionol in the South West several years ago. Photos courtesy of Pat Sky. 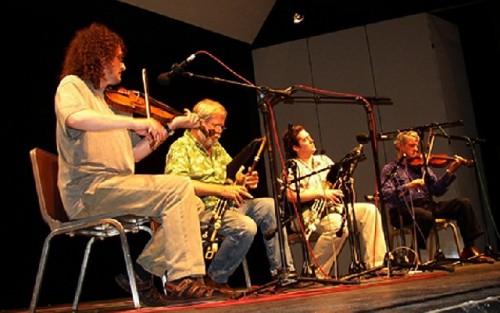 The Pat Sky ensemble in performance. 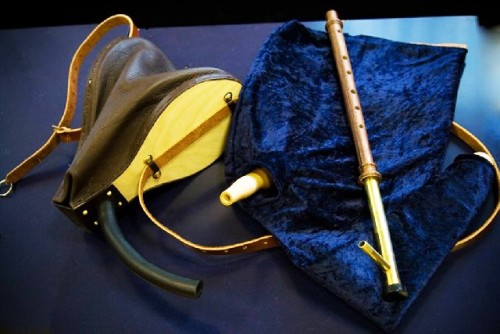 A basic practice set of uillean pipes made by Sky. 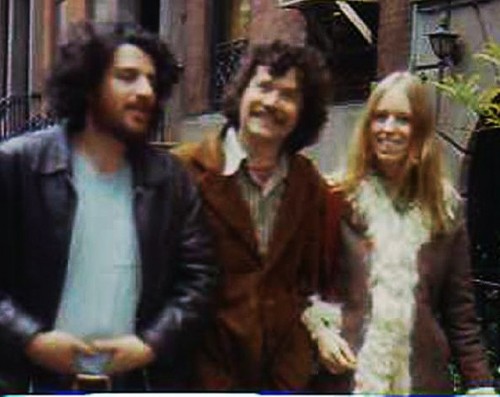 Pat in New York in the 60s with songwriter Gerry Geffen. 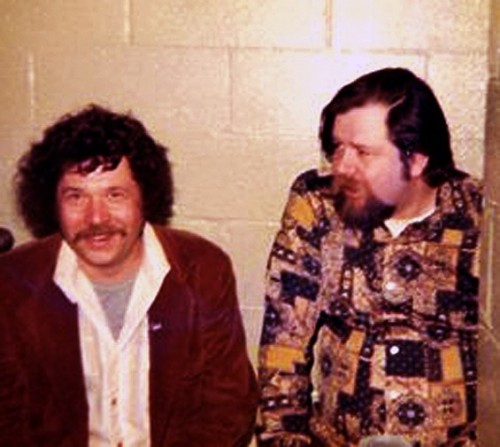 Pat with Dave van Ronk in the 60s.

In the Spring of 1965 WGBH assembled an elite if disparate collection of folk musicians, an appreciative audience and a television production crew at a manse in Newton and proceeded to record a program titled "A Roomful of Music." It included Pete Seeger, Joan Baez, Josh White Jr., Sonny Terry and Brownie McGhee all established and well known performers, and it introduced the McPeake family of Belfast providing many American enthusiasts with their first experience of the uilleann pipes.

While similar in some ways to conventional bagpipes, uilleann pipes differ in that air comes not from the lungs, but from a bellows at the player's waist pumped by the piper's elbow, uilleann being Irish for elbow. This difference allows performers who would to play the pipes and sing at the same time. For those of you who are interested in a more detailed description of the instrument, its history and its complexities I direct you to the Wikipedia article that can be found at http://en.wikipedia.org/wiki/Uilleannn_pipes .

With its sweet tones, and an ability to produce melodies spanning a two-octave range, the instrument attracted many fans to the budding Irish music audience. However, any musician interested in becoming a player of this instrument had a number of obstacles to overcome, principal among them was the finding of a set of pipes.

Pat Sky reports in thinking back that he must have been subliminally aware of the pipes for a few years, for he even performed on the same bill with the McPeakes at least onece. However, he had paid them little mind until, while song-swapping with friends in a motel room, at the Philadelphia Folk Festival in 1970, there came a knock at the door. It was Irish singer, Joe Heaney, and he had in tow a stranger by the name of Liam O'Flynn who was sporting a set of uilleann pipes. Joe prompted Liam to play and Patrick was blown away,

Sky was so taken with Liam's music, that, about to embark on a tour he convinced Liam to come along as an opening act. At that point, Liam's experience as a performer was almost nil, requiring Patrick to insyruct him in the art of devising a set, contriving introductory patter and framing his pieces for the audience. Liam proved an able student and the performances were well received..

By the end of the tour, Pat wanted a set of pipes for himself, but that, as noted above, was problematic. There were no commercially made pipes and no easily found pipe makers. Resorting to ingenuity, he set about visiting Irish bars asking about the whereabouts of pipes of which anyone might know. A lead took him to the Irish Pavilion, a NYC Irish watering hole that actually had a set of pipes on display, but the owner was only willing to sell them to a piper, not a claim which Pat could at that point make.

Pat instead supplied Liam with a couple of hundred dollars and sent him forth to make the purchase. The owner, satisfied with Liam's credentials passed over the pipes for less than 200 dollars and Patrick the Piper was born. (Incidentally, the owner of the bar eventually sold said premises to Tommy Makem). The pipes turned out to have been made by Leo Rowsome, who hailed from a family in Ireland with a long history of pipe playing and pipe making.

With pipes in hand and Liam about to depart back to Ireland, Pat decided to go with him. Arriving in Ireland, succumbing to pneumonia and surviving, he set about to find someone who could provide reeds for his pipes. Liam introduced Pat to reed maker Dan Dowd and Pat managed to get a set of reeds with which to start. On return to the states and once again in need of reeds, he launched yet another search and found the now renowned Tom Busby out on Long Island who proved willing to tutor Pat in the making of reeds.

If there is anything the gods have designed to bedevil pipers, it is the hellacious difficulty involved in the making of a proper reed.. To this day, Pat claims that most of the reeds he has made lie moldering in a "not good enough to use" drawer. To understand the extent of the difficulty you can read Pat's own comments at http://www.patricksky.com/page-3.htm  .

Despite said problems, Pat honed his skills to begin making and selling basic pipe sets which he still offers for sale more as a way of recruiting new pipers than to make a profit.

This was not Pat's first venture into instrument making, Oddly enough, the first reference to Patrick Sky I ever heard was as an instrument maker. In 1963 Buffy Sainte Marie would credit him in her introductions to "Cripple Creek." as the maker of the mouth-bow with which she accompanied her performance. Pat says that he first became aware of the instrument from its use by Jimmie Driftwood. Later, during one of the many returns to Ireland which were to follow, he established the first Irish Pennywhistle manufacturing company there.

From the days of that first involvement, have come great changes. Where the art of pipe making was nearly extinct in the 70's today there are hundreds of pipe makers, and gatherings of pipers all over the country. The more formal ones, called Tionols, are held in this country from the Northeast (http://www.eastcoastpipers.com /) to the Southwest http://www.socalpipers.com  and at many points in between as well as in the Isles and across the EU.

Clearly, as Pat immersed himself in Irish traditional music, he went all the way though he claims it was not a conscious decision, but that gradually as his performances evolved, one by one, the Irish numbers replaced his former repertoire.
.
The transition of Patrick Sky, angry young protest singer and iconoclast to Patrick Sky, traditional Irish musician and preserver of the flame continued. I can only assume that his meeting and marriage to Cathy Larson Sky reinforced the evolution and as she became a proficient and seasoned fiddler, the binding effect of the music intensified the process. They both studied and received their masters degrees in folklore from the University of North Carolina at Chapel Hill.

I recently asked Patrick if he missed performing on the road. He replied:

"As to missing a singing career? I haven't performed in years. The whole music scene that I knew is completely non existent. That said, we are thinking or booking a few small house concert tours in the future. We just finished our only CD and hope to use it to get a few gigs. Who knows what will happen?"

The new CD, "Down to Us, Patrick and Cathy Sky" is a collection of duets featuring of course the pipes and the fiddle. For more information on the contents and ordering,

I am sure that I am not the only person who will continue to miss the strident voice, the challenge to my conscience and consciousness and the satiric quirky perspective that Pat once used to communicate his vision to the world. But I would never want to deprive him of his current peace of mind, his joy of the pipes, his passion for sharing the Irish music tradition and the music he daily makes with Cathy. I think he has made a good trade.