Arias by Mozart and a Monodrama by his Contemporary Cimarosa 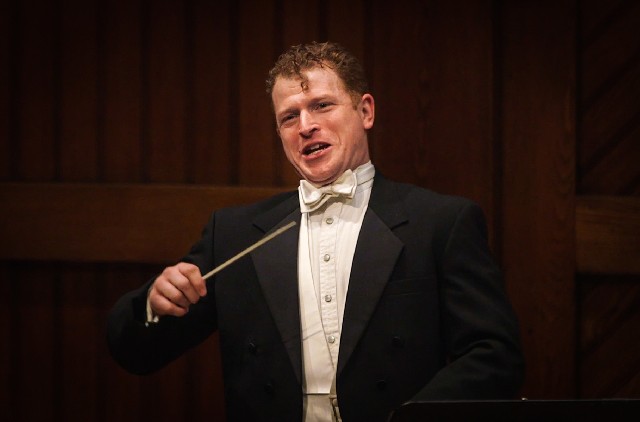 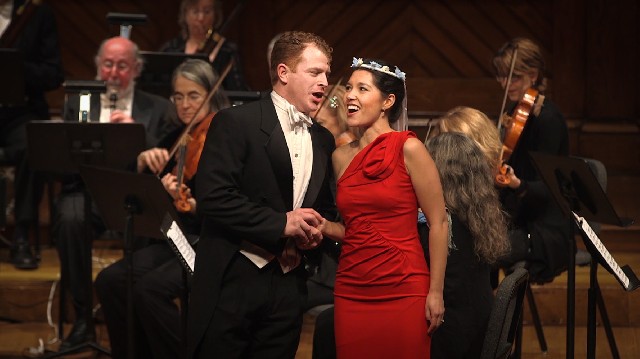 I have to admit that I left Boston Baroque’s New Year’s Concert a little intoxicated, and it had nothing to do with the bubbly served at intermission. The New Year’s Day matinee was so delightful I hope its memory helps me get over the inevitable speed bumps of the coming year. After all, we just installed a right-wing Congress in Washington that will do its best to screw up any progressive tendencies that survive there.

Quite appropriately, Boston Baroque’s Music Director Martin Pearlman, who founded the period instrument orchestra, America’s first, 41 years ago, led off with Mozart’s Divertimento for Strings in D major, which proved to be totally, ah, diverting. Pearlman led his small string band of some 19 players - for what it’s worth, all female - with verve and drive but lightness of touch, the players responding with brightness and transparency of tone and rhythmic vibrancy. The youthful work – Pearlman told the audience during brief remarks that Mozart was only 16 when he composed it – showed the influence of such predecessors as Georg Frideric Handel and Franz Joseph Haydn, which an outfit specializing in the Baroque would bring to the fore. The work bore all the high-spiritedness that is Mozart’s youthful hallmark. One couldn’t imagine it being better played and one couldn’t suggest a better way to start off the concert.

It had probably been close to 30 years since I’d attended a concert at Sanders Theatre. I left Boston for the West coast in 1989, and by the time I returned four years ago Sanders Theatre no longer seemed to be playing the major role in the region’s music life it did then. It’s a wonderful space, a masterpiece of Gothic Revival, realized in wood rather than stone, the seats arranged in a semi-circle around the stage, which bears heraldic decorations and, on either side, marble statues of historic worthies. But its acoustics are not ideal. The wood seems to absorb sound rather than project it forward, and even though I was sitting rather close, the music seemed far away. Fortunately, I was able to adjust my ear fairly quickly, and all was well, although when the singers turned away from my direction, their voices tended to vanish, which wouldn’t happen in a space better suited for acting singers. The hall requires singers to stand and face the audience if they want to be heard, which opera singers are loath to do today. Sanders seems better suited for oratorios and religious works rather than opera, which of course is what it was built for.

The program featured two near contemporary composers, Wolfgang Amadeus Mozart (1756-1791) and Domenico Cimarosa (1749-1801). The former is one of the most performed and best- loved composers of all time; the latter, a historical obscurity, although his music has merit and shares Mozart’s classical style.

Music by Mozart dominated the program, most of it familiar arias and duets from three of his major operas, “Le nozze di Figaro,” “Die Zauberflöte” and “Don Giovanni.” There was one concert aria, “Nehmt meinen Dank,” a retiring soprano’s farewell to her fans that was a delightful rarity, although one hopes it’s a long time before Sara Heaton, at the start of what promises to be a long career, has to sing such an aria.

But the program’s draw – at least for me - was Cimarosa’s half-hour long monodrama, “Il maestro di cappella,” which is heard of but seldom actually heard.

Under Pearlman’s leadership and the two superb vocalists, Heaton and baritone Andrew Garland, it all proved to be intoxicating – oh, I think I already said that. Anyway, who needs the phony effervescences of Viennese waltzes and operettas that dominate New Year’s programs when you can get great music from Mozart and true dizziness from Cimarosa?

The vocal part of the afternoon began with the first two scenes “The Marriage of Figaro,” which reveal the bantering but loving relationship of the two soon-to-be married servants Susanna and Figaro. (For the Mozart and Cimarosa the orchestra was augmented with woodwinds, horns and harpsichord, some of them played by men.) Although this was a concert opera, the two singers were in character throughout, singing from memory not scores. Garland made his entrance bounding on stage, taking the dimensions of a particularly commanding heroic marble figure at stage left. (Dramatically, he is measuring the room that will be their chamber after they are hitched.) The young, attractive singers sang and interacted with rapport – Susanna was trying on a hat she had made for the wedding. It required no effort on the audience’s part to imagine them in love and getting married later that day.

Of course, nothing so simple would propel a two-act, three-hour opera. Susanna, wiser in the ways of love than her husband-to-be, knows that the lecherous Duke is giving his servants this choice room so he will have easy access to her when he so desires – and Figaro is away on some task. When it finally gets through to Figaro what’s going on, he responds with one of Mozart’s great baritone arias, “Se voul ballare” – if the count feels like dancing, Figaro will call the tune. Garland delivered the aria with authority, showing more than a touch of anger, and on the repeat he ornamented the opening melody with a nice little trill.

Papageno in “The Magic Flute” is a role that seems to have been written for Garland as he demonstrated last year in the Boston Lyric Opera’s largely unfortunate account of the popular opera, which he stole from the ostensible leads. Garland equaled that performance here, embodying the feather-covered bird-catcher, a Rousseauian natural man, even while in formal wear. (A little red curl in the middle of his forehead – his own - added to his faux-rustic appeal.)

Garland roamed the stage singing unschooled, folkish melodies about his profession and his unfulfilled desire for a mate. As his lack of love makes him more desperate he threatens – to no one but himself – suicide. His threat is largely empty, and he keeps on making bargains with himself about when to actually commit the deed. Garland was both comic and affecting in music Mozart wrote that balances such opposing emotional states, finding nuances in a role many see merely as comedic.

After intermission, there were a couple of numbers from “Don Giovanni.” Heaton opened with Zerlina’s politically incorrect (by today’s standard) aria addressed to her lover Masetto to “Beat me, beat me, my Masetto.” Of course, she has cheated on him with the Don, who is irresistible to women. Heaton demonstrated a perfect Mozart soprano voice, light, flexible, capable of nuance and beautiful of tone. In her off-the shoulder red gown, she didn’t look for a minute like a peasant; however, she did look like an opera star.

Heaton’s star-turn was followed by Leporello’s famous “Catalog Aria,” in which the Don’s loyal but put-upon servant, enumerates his conquests, by country – 640 in Italy, 231 in Germany, 100 in France, 91 in Turkey, but in Spain, he triumphantly explains, there were 1003. Who were they? They were peasants, housemaids and city dwellers, countesses and baronesses, marchionesses and princesses. In a democratic spirit of a true rake, they were young and handsome, old and plain. The “Catalog Aria” is always a surefire hit, and while Garland, with his light expressive baritone was more than adequate, the role ideally requires a heavier baritone, one verging on bass.

The final Mozart selection was the duet in which the Don seduces the innocent Zerlina. “Là ci darem la mano” (There I’ll give you my hand) is one of the loveliest Mozart ever wrote, the Don gently persuasive, Zerlina line by line losing her resolve to be faithful to her Masetto. I suspect the duet has served as a seduction guide for generations of opera lovers with seduction on their mind. Heaton, again, was perfect as a Mozart ingenue; Garland found the Don’s vocal line a more comfortable match to his own voice.

After the Mozart, came the afternoon’s pay-off for both those who seek out new opera experiences and those who like a good farce. Mozart’s comedies “Figaro” and “Don Giovanni” combine his sublime music with the subtle texts of Lorenzo da Ponte, which range from highly refined humor to the lowest behavior, charting all the shades on the moral scale. Cimarosa’s little trifle shows no moral complexity at all: It’s a simple buffo portrait of an imperious, arrogant and largely untalented conductor, “il maestro di cappella,” the choirmaster. It also happens to be hilarious.

Cimarosa was a major composer of his era. Trained in Naples, which was a major center of 18th century opera, he was summoned to St. Petersburg to work for Catherine the Great and also spent time in both Berlin and Vienna. (It is thought that “Il maestro di cappella” was written in Berlin.) He wrote some 80 operas, most of which have disappeared. Only one, “Il matrimonio segreto” (The Secret Marriage), is staged with any regularity. I heard it ten years ago in St. Louis and it was a delight, funny and light and you wonder why it isn’t done more often. “Il maestro di cappella” is done even less frequently – how do you program a work, a monodrama, that barely makes it to the half hour point?

Well, a New Year’s Concert is the perfect time to do it, and we can thank Boston Baroque for bringing to life a work that abounds in vitality. Another problem is that little of the original orchestration remains, so Pearlman, as he did earlier in the season with Monteverdi’s “Vespers of 1610,” basically composed the edition we heard at Sanders Theater. Since Pearlman is so well versed in 18th century classical style, it sounded of the period. I doubt if Cimarosa himself would notice that it wasn’t completely his composition.

Despite the contributions of the orchestra and Pearlman, this is essentially a one-man show, and Garland was the right man for the job. Before he lifted his baton, Pearlman explained the work a bit – as we soon saw, the maestro is pompous, lazy, eager to take credit for others’ achievements. He’s also always late as such people tend to be, and Pearlman starts the overture in his place.

The overture is light, lyrical, running in the Italian buffo style. Garland enters blustering, holding a cell phone in which he shouts, “I’m in rehearsal.” (The excellent English text by the way was by local baritone David Kravitz.) He berates the players for their incompetence and tries to lead them into some kind of cohesion. The players ignore him, the bassoons entering at the wrong time, the double basses making some ugly sounds, whether because they are truly inept or to spite him you have to decide for yourself. The maestro is beside himself: no, no, you’re driving me insane, he sings, roaming through the orchestra, practically playing the instruments himself. He cajoles them to look to the great composers of the past, suggesting that when the rehearsal is over they’ll all have some vino and a happy new year. When, due little to his leadership, the band comes together and starts making some listenable music, he calls out “bravi, bravi,” and says, “it’s all because of me.”

Garland gave a bravura performance. One hopes he gets to do it frequently in the future.