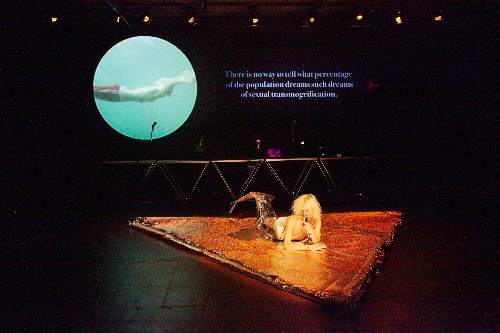 Performances at La MaMa are rarely predictable. Sometimes that makes for an evening of confusion and disappointment, and at other times -- as in Italy’s celebrated Motus Company’s U.S. Premiere of MDLSX, a brilliant solo performance by Silvia Calderoni that is a combination of dance, music and multimedia – the experience is exhilarating, moving and even life-altering.

The evening tells the story of “Cal/Calliope” -- a genetic male raised as a female because of an “abnormality” of his genitalia (Hypospodias, in which the penis is short and the urethra is on the underside). As Cal grows and hits puberty, sprouting up but not sprouting breasts, he realizes that his parents and doctors have opted to choose his sex (female) for him – including a planned surgery that would make him “look” more like a traditional female.

Not willing to have others make his most crucial decisions, he runs away to explore himself and the world and to find where he really belongs. The remainder of the 80-minute performance tells the story of his continued self-discovery, until it comes full-circle and Cal returns home – to be accepted as he really is and has always been -- by his father and the rest of the family.

MDLSX is based on both Calderoni’s own experiences (the home movies projected on the backdrop are of Calderoni’s family), and on Jeffrey Eugenides’ novel “Middlesex,” from which MDLSX takes its title. The entire piece is presented as a sort of “album:” The home movies are interspersed with live shots of Calderoni as she holds the camera out in front of her and performs; text projected next to the video offers observations (“I’d like to have a word for . . . the hatred of mirrors which begins in middle age”) interspersed with "Track" credits for the music, which is from artists as diverse as Buddy Holly, The Smiths, Smashing Pumpkins, and the Talking Heads -- creating a playlist or album of eclectic (but always wonderful and appropriate) songs that Calderoni chooses on stage as “D.J.” during the performance.

The staging is simple and subtle: A large triangle (a nod to the universal symbol of gender diversity) carpets the floor; a simple backdrop provides the surface onto which the video and slides are projected. Calderoni’s D.J. equipment, props and costumes (which she strips on and off to tell the tale of her progression from girl, to boy, to performing mermaid, to prodigal son – often fully exposing her lean, androgenous, well-muscled body in the transition) are on a simple table at the back of the stage. But even the triangle transforms into a sail to be danced with, or waves which entwine the mermaid -- reinforcing what I took away as the message of the performance: People and things do not fit into neat holes and descriptions. Or as one slide read: “Normality isn’t Normal!”

Congratulations to Calderoni and the rest of the creative team at Modus – MDLSX was an experience that breaks molds, bursts through barriers – and changes the way we look at ourselves and the world around us.

Motus was founded in 1991 by Enrico Casagrande and Daniela Nicolo with the belief that there are no borders or limits between countries, historical moments or disciplines. Motus’ MDLSX will be at The Downstairs at La MaMa, 66 E 4th St., NY, NY from Jan 7 – 17; for tickets go to lamama.org or call 646.430.5374.