Dinosaurs in Their Time in Pittsburgh 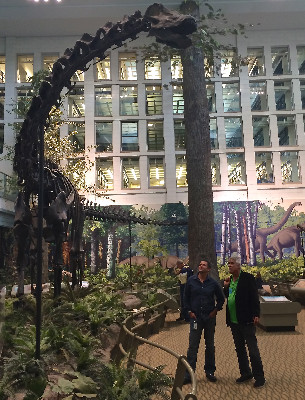 Curator Matthew C. Lamanna, Ph.D. (left) stands with a visitor next to the museum’s first and most famous dinosaur skeleton, Diplodocus carnegii, discovered in 1899. Photo by Susan Cohn/ Daily Journal.

DINOSAURS IN THEIR TIME: JURASSIC CELEBRITIES AT THE CARNEGIE MUSEUM OF NATURAL HISTORY IN PITTSBURGH, PENNSYLVANIA.

Superstar dinosaurs reside at the Carnegie Museum of Natural History in Pittsburgh, Pennsylvania. The museum, home to one of the world's finest collections of dinosaurs and other fossils, houses an exceptional gathering of “holotype” dinosaurs, the specimens that forever define a species. Among these are the world's first specimen of a Tyrannosaurus rex; the 84-foot-long Diplodocus carnegii (the founding specimen of the museum collection); and a recent addition - an oviraptorosaur named Anzu wyliei, tapped as one of the "Top 10 New Species" discovered in 2014.

The museum's association with famous fossils dates back to shortly after its 1895 founding by Pittsburgh-based industrialist Andrew Carnegie. Carnegie wanted a dinosaur for his new museum and told his staff to spare no expense in finding one. His money produced results, and on July 4, 1899, museum scientists, digging in Wyoming, unearthed the fossil remains of Diplodocus, one of the largest dinosaurs ever discovered. In honor of Carnegie, the specimen was given the scientific name Diplodocus carnegii, but over the years it has become more familiarly called “Dippy.” It continues to hold a place of honor in the museum’s main gallery.

A KING ASKS FOR A DINOSAUR

Word of the museum’s 1899 discovery spread rapidly and Carnegie was soon inundated with requests from museums that wanted a dinosaur of their own. In 1902 English King Edward VII personally asked Carnegie for a diplodocus for the British Museum. Carnegie accommodated the king by sending a plaster copy, which was installed in London in 1905. During the next 25 years replicas of Pittsburgh’s diplodocus were installed in Berlin, Germany; Paris, France; Vienna, Austria; Bologna, Italy; St. Petersburg, Russia; La Plata, Argentina; Madrid, Spain; and Mexico City, Mexico. For many people, Dippy was the first dinosaur they had ever seen and was, for a while, the most famous dinosaur in the world.

DINOSAURS IN THEIR TIME

What began in 1899 with the discovery of Diplodocus carnegii eventually led to the museum’s current Dinosaurs in Their Time, the first permanent exhibition in the world to feature scientifically accurate, immersive environments spanning the Age of Dinosaurs—arranged chronologically and filled with actively posed original fossil specimens. Nineteen freestanding dinosaur skeletons appear surrounded by scientifically correct reconstructions of their respective environments, accurately placing the dinosaurs into the ancient ecosystems in which they lived. Matthew C. Lamanna, Ph.D. Assistant Curator, Section of Vertebrate Paleontology, said, "The Dinosaurs in Their Time exhibition at Carnegie Museum of Natural History is one of the only places in the world where one can see real fossil dinosaur skeletons displayed in scientifically accurate representations of their respective environments.

In Dinosaurs in Their Time, dinosaurs are shown alongside plants and other animals that are known from fossils from the same ancient ecosystems. Put simply, in Dinosaurs in Their Time, whenever two species are exhibited together, they actually lived together. Dinosaurs in Their Time features real fossil skeletons of such famous dinosaurs as Tyrannosaurus rex, Apatosaurus louisae, Diplodocus carnegii, Stegosaurus, and Allosaurus. The T. rex, Diplodocus, and Apatosaurus skeletons on display are the type, or name-bearing, specimens of their respective species. All told, some 230 objects are on display, approximately three-quarters of which are original fossils."

The Carnegie Museum of Natural History, located at 4400 Forbes Ave., Pittsburgh, is adjacent to the University of Pittsburgh. In 1999, to pay tribute to the 100th anniversary of the Diplodocus discovery, the Carnegie created a life-size fiberglass sculpture of Dippy, its most iconic specimen. The sculpture, which weighs 3,000 pounds, stands 22 feet tall, and measures 84 feet in length, may be seen near the front entrance of the museum. For more information, visit http://carnegiemnh.org or call 412-622-3131.

The tale of Andrew Carnegie’s dinosaur is told in Tom Rea’s book Bone Wars: The Excavation and Celebrity of Andrew Carnegie's Dinosaur. For the bigger picture of the search for dinosaurs in the late 19th century American West, check out The Gilded Dinosaur by Mark Jaffe, which tells of the heated professional rivalry between early dinosaur hunters Edward Drinker Cope (of the Academy of Natural Sciences in Philadelphia) and Othniel Charles Marsh (of the Peabody Museum of Natural History at Yale) that ultimately led to their mutual social and financial ruin.