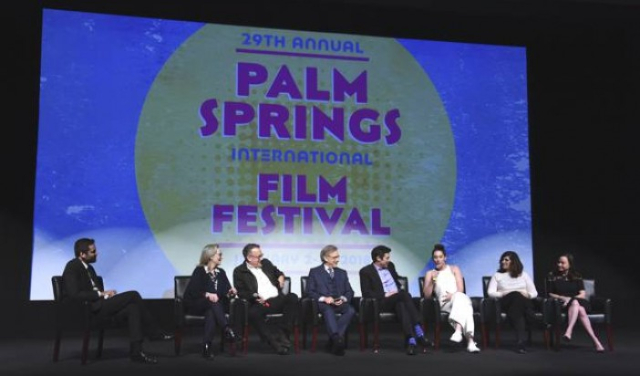 One night, every year, the third largest film festival in North America honors the crème de la crème of the creative arts community with awards and tributes for their work in movies during 2017.

On January 2nd, Palm Springs International Film Festival (PSIFF) officially launched its 29th Annual Film Festival and Gala. More than 2400 guests, attended, along with stars, celebrities, industry professionals, screenwriters, producers, directors, and actors to rub elbows at the Palm Springs Convention Center, as they accepted their Awards for their artistic accomplishments during 2017.

By way of background, Daniel Ellsberg was a Rand Corporation military analyst and a whistleblower with a conscience.  He sent the New York Times almost 4000 pages of secret government messages and private communications involving the Viet Nam war and the US government’s on-going role in that enormously unpopular and misunderstood war hoping, for full disclosure to the American people from the Nixon administration.

Ellsberg felt that the people had the right and the need to know what their government had been doing for almost 30 years in South East Asia.  He felt that the people should have input in deciding on what their government should do concerning Viet Nam, or “Nam,” as the soldiers who fought and died serving the war’s ‘raison d’etre’ called it. Whatever it was called, it was a ‘dirty war’ with plenty of blame to go around on all sides. Actually, there is no such thing ever as a ‘clean war.’

Ellsberg also had mixed emotions about revealing the on-going government lies being fed to the public over the years.  In the end: truth won over obfuscation.  Years later, the American public learned even more new facts from the excellent 2017 Ken Burns documentary series “The Viet Nam War.” On a sidebar note: Ellsberg was the subject of the 2010 PSIFF documentary film called “The Most Dangerous Man in America: Daniel Ellsberg and the Pentagon Papers.”  It went on to win the festival’s Best Documentary Award in 2010. I interviewed him and spent a couple of hours with him.  During the time I spent in conversation with him, I failed to find any horns, a long tail, or a pitchfork that had been publically attributed to him by his detractors.

Before the movie screening began, there was a scheduled discussion the creative-team panel of screenwriters, Josh Singer and Liz Hannah and the producers Amy Pascal and Kristie Macosko Krieger that was to be moderated by PSIFF Artistic Director, Michael Lerman.  As Lerman introduced each member as they came on stage.  He suddenly hesitated and then, with perfect theatrical timing, introduced Streep to the audience which gasped, then exploded in applause and then Hanks walked on stage, and the applause sound level grew even louder. When Spielberg was introduced, the auditorium walls were literally pulsating to standing ovations. The appearances by Streep, Hanks, and Spielberg were not previously announced.  This is a show business crowd that knows how to keep a secret for maximum effect.

The audience was most interested in the comments of Streep, Hanks, and Spielberg, including the repartee and anecdotes that often occurred in the making of the film. Spielberg had worked with Hanks on several projects, but never with Streep. Also, it’s hard to imagine, that two of America’s finest and beloved actors had never acted together. It merely took one of America’s great film directors put that issue to rest.

Following the panel discussion, the lights dimmed and the taut Academy Award contender film “The Post” began.  Set against the backdrop of the turbulent 60’s and 70’s during the LBJ and Nixon administrations, Spielberg’s movie of the same period is an entertaining, richly-textured, intense film that boasts a  stellar cast that is solidly acted on all levels.

Where the Academy Award-winning film “All the President’s Men”, focused on New York Times reporters Bob Woodward and Carl Bernstein who broke the story, Spielberg and his screenwriters Josh Singer and Liz Hannah chose to tell their story from the point of view of The Washington Post Publisher Katherine Graham (Streep) and her feisty, fearless newsman/journalist, Executive Editor Ben Bradlee (Hanks).

Ultimately, the dilemma of to publish or not to publish is left up to Graham who must make the agonizing decision of releasing the stolen files and the story of the “Pentagon Papers” written by her senior staff of journalists and department managers or to kill the story.  It’s a huge risk. The Post, if challenged by government lawyers, lose their case, the newspaper could end up in bankruptcy, and worse; she and the senior staff could go to prison for publishing secret government information.

It’s always challenging to the filmmaker and the cast when rebooting an iconic story and a film like “All the President’s Men.” The audience is constantly comparing the impact of what they are seeing on the screen now with what they remember from 40 years ago; many of whom weren’t even born.  But, Spielberg is a master of engaging his audience right from the get-go. To insure he retains them, he sprinkles his narrative storyline with interesting visual elements, chronicling the steps necessary that a newspaper must go through in order to print the most explosive of news stories in politically savvy Washington, D.C.

Remember, there was no internet back in the 60’s and 70’s.  No quick digital access.  Men ran the newspaper business and the Media.  Katherine Graham was an anomaly; a woman who found herself owning a newspaper in a man’s world without any background or experience, yet she succeeded in making The Washington Post a world-class newspaper over the years along with her fearless, legendary, Executive Editor Ben Bradlee at the helm.

In the movie, the core issue of a newspapers right to inform and the public’s need to know rests in the First Amendment Right. It’s a case of a free press, versus the government’s pressure to suppress that constitutionally protected right. The movie “The Post,” is especially relevant now in light of the Trump administration’s continuing war with today’s media with the insistence of charges of ‘fake news’ and ‘alternative facts.’ The film opens in select theatres nationwide beginning January 12th.