Giant White Bunnies at the Lawn on D

Down the Pop Culture Rabbit Hole 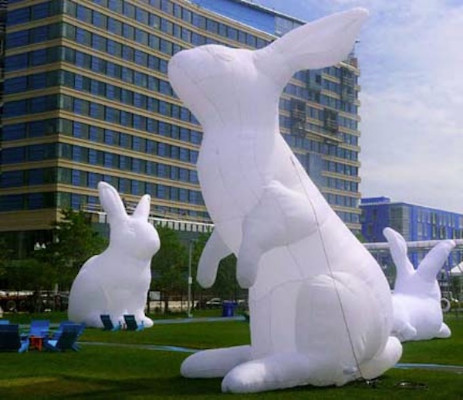 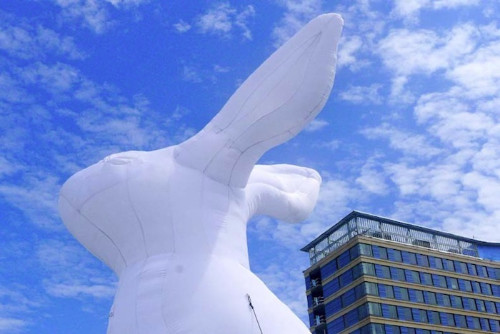 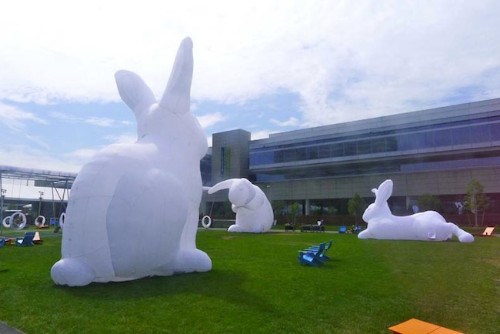 Giant helium filled structures tickle our imagination. This is because balloons were our first air travel vehicle, a child’s temporary spheroid triumph (that either deflate or pop) that inevitably floats through any larger-than-life fantasy.  Tasmanian artist Amanda Parer’s Intrude  is on the Lawn on D (through July 12) at the Boston Convention & Exhibition Center. The installation’s five giant white inflated rabbits make visitors feel Lilliputian and the effect is somehow visually charming — at least at first.

Parer’s giant creatures (about 24 feet high) exude an inviting symbolic power, but they also suggest an intimidating real world storyline. These bunnies are not meant to be benign cottontails, but physical representations of the artist’s environmental concerns. Rabbits were an alien species introduced to the Australian environment 200 plus years ago. Now they are considered vermin because they are overwhelming the Outback and encroaching on the suburbs.

According to the artist, “Intrude is about us, Westerners, Europeans, coming to Australia and dramatically changing the space. They not only introduced a new species, but also caused a dire effect on the indigenous peoples there. As a culture, we haven’t come to terms with that.” That’s an interesting message, but does that alarm come through to a non-Australian? (Boston is one of the stops on the project’s intercontinental tour, which has included stints in Australia, Belgium, France, England, Italy and Canada.) According to Parer, Intrude makes a social and environmental statement. But do little children relate to the giant bunnies that way? Aren’t most of the visitors, uninformed about the piece’s context, simply intrigued by the rabbits’ size, placement, and cultural significance?

Since 1927, buoyed by the cartoon character balloons in Macy’s Thanksgiving Day Parade, large inflatables have become an indispensable part of the celebratory vision of generations. Pioneering puppeteers Tony Sarg and Bil Baird first created an undulating dragon, a fluttering Felix the Cat, and a buoyant giant hummingbird. Subsequently, each year different fanciful figures have been added to Macy’s line-up. Today, Peanut’s Snoopy is a parade star, along with other current and past animated creatures and heroes. The fantastic critters added to the pageantry; the crowd loved them.

Beginning in the 1960s, artists experimented with making inflatables part of “happenings” and temporary art events. The late Otto Piene was a major figure in creating these kind of lighter-than-air structures. His largest piece was the inflated rainbow at the 1972 Munich Olympics. Throughout his career he created SkyArt that included large-scale floating visions of anemones, mythological beings, and sea creatures.

Brooklyn-based artist Kurt Perschke is responsible for the giant Red Ball Project. At 15 feet in diameter and about 250 pounds, the crimson sphere has been squeezed (literally) into nooks and crannies around the world, from Los Angeles and Paris to Perth and Taipei. It has been compressed onto suspension bridges, pinched between buildings, and wedged inside lobbies. Who doesn’t love a big red ball?

Of course, the Red Ball Project is not just about eyeing a large object. It is about how the Red Ball’s placement can be used to underscore the power of the architectural imagination. Perschke wants to create visual experiences that invite new ways of looking at the structures around us.

Not all oversized inflatable sculptures are so innocuous. At Paris’ elegant and historic Place Vendôme, the LA-based artist/provocateur Paul McCarthy, known for his sexually aggressive installations, set up a giant green inflated version of a sex toy (a butt plug). He entitled the piece “Christmas Tree.” In less than a day, McCarthy was slapped by what the French news media called “a conservative protester,” and the structure was permanently deflated by so-called angry protesters.

And that is the takeaway. Parer’s artwork somehow draws on our various rabbit memories and references. The effect was to scramble together different bunny archetypes: allusions to the threatened rabbit society in Richard Adams’ scary Watership Down mesh with fond memories of reading the cuddly adventures of Beatrix Potter’s Peter Rabbit. Parer’s dangerous rabbits, their power as Australian myth and metaphor, were only one part of the playful mix.

So Intrude at the Lawn on D became much more than an environmental statement/art experience. It invited a tantalizing visual journey that meshes fantasy, reality, and memories of rabbits past.