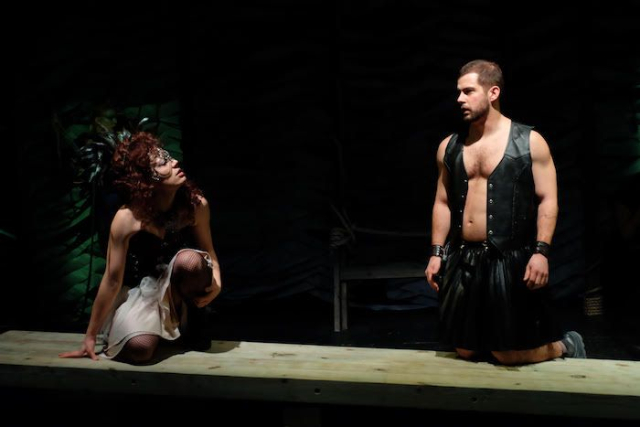 Bedwell as Phèdre and Bisto as Hippolytus. Photos by J. Michael Griggs. 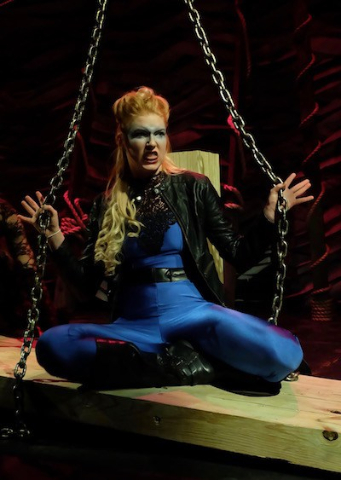 Before the play begins, two characters are on stage. Hippolytus (manly, leather-clad Dennis Bisto) sits stolidly while his friend and tutor Theramenes (John Kahara, also in leather but in makeup, spike heels and fishnet hose) squirms restlessly. When the play opens, they discuss Hippolytus’ wish to journey and find his father, Theseus, wherever he is. He prefers not to stay in Troezen since “Father left us with that woman, Phèdre, the daughter of the mother of the Minotaur.” Theramenes agrees, “she hates you … and you hate her …the wicked stepmother.” Hippolytus confesses another reason he wants to leave. He’s in love with the wrong woman: Aricia (Abby Blankenship), the daughter of the house overthrown by Theseus. Despite a vow of chastity, Aricia loves Hippolytus.

Later, the nurse, Enone (Ann Sonneville) leads in Phèdre (Tiffany Bedwell), who is sick and may be dying. “Some dark scenario has overcome her brain,” Enone says. “It ‘s the curse, my mother’s curse, the revenge of Venus and Eros on all our family,” Phèdre says. She finally confesses she is in love with her stepson, Hippolytus. They learn that Theseus is dead and speculate on who will take the throne of Athens. But Theseus returns, alive and well, and plotting and conspiracies ensue.

We need a quick mythology recap here. Phèdre is the daughter of Minos (who weighed the souls of the dead when they arrived in Hades) and Pasiphae, who gave birth to two daughters, Ariadne and Phèdre. Pasiphae lusts after a bull and gives birth to the monster Minotaur—half bull and half man. Theseus, king of Athens and Troezen, has a son named Hippolytus by Antiope, the queen of the Amazons. He slays the Minotaur and marries Ariadne, then abandons her and marries Phèdre, who secretly loves her stepson, Hippolytus.

Paul Schmidt translated and adapted the script for Phèdre. Wiesner’s direction slickly choreographs the movement of pairs of characters from scene to scene. Throughout the play, two characters perform in most scenes. The other performers arrange themselves around the stage perimeter, writhing, dancing and moaning/chanting—because they are the chorus.

Rachel M. Sypniewski’s costumes are the visual highlight of the production, cleverly accessorized by Zsófia Ötvös’ makeup design. Phèdre’s black and white gown is set off by her crown/mask. Some of the characters have careful streaks of makeup creating mask effects.

Jean Racine was one of the three great 17th century French playwrights, along with Molière and Corneille. He is known mostly for his adaptations of Greek tragedies and wrote Phèdre (inspired by Euripides’ play) in 1677. It’s considered his masterpiece.