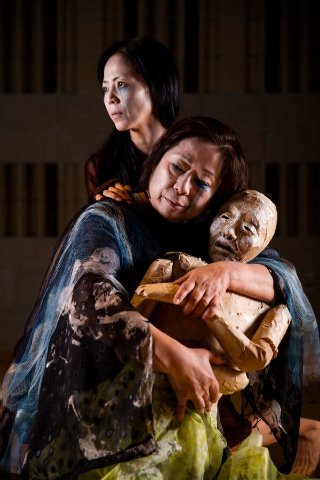 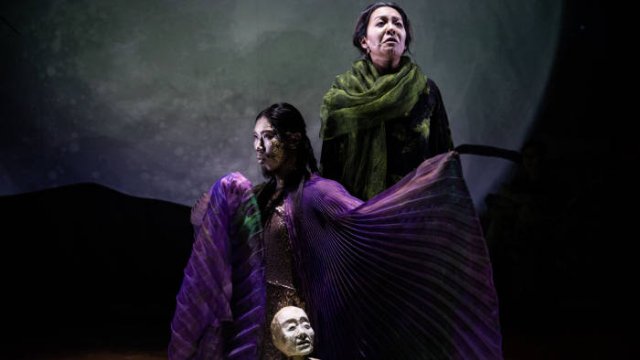 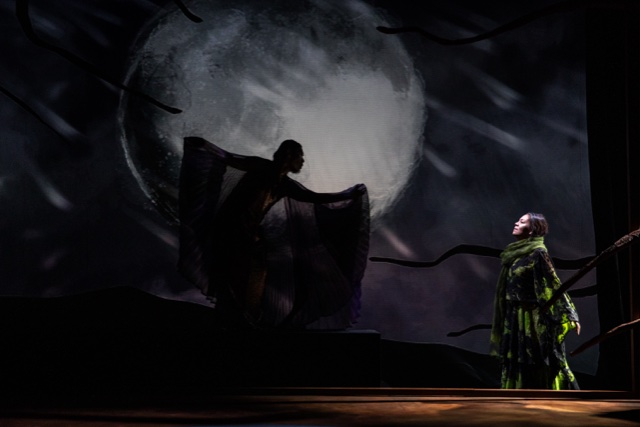 The moon and the aunt. Ju-eh/Juecheng Chen and Nina Yoshida Nelsen 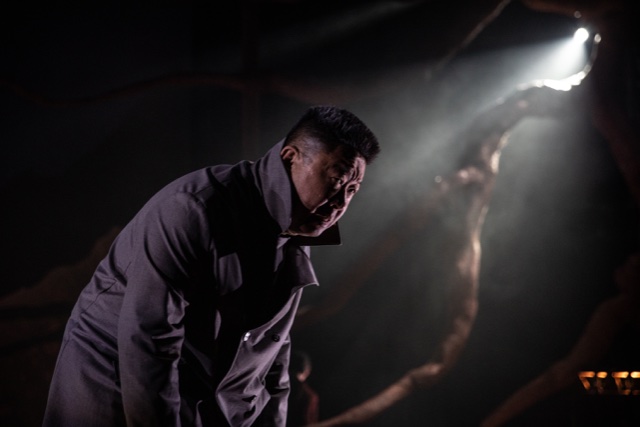 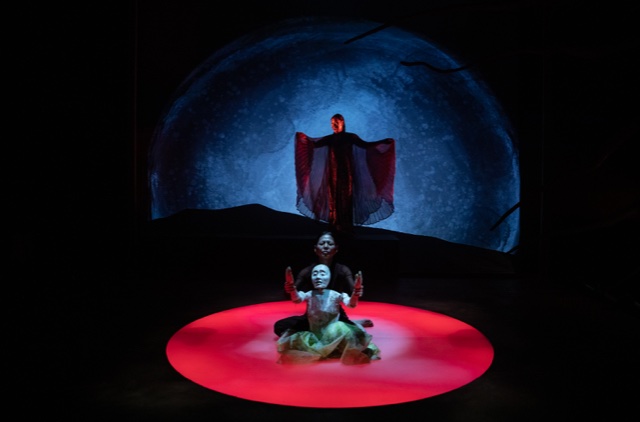 The blood moon bathes this opera. 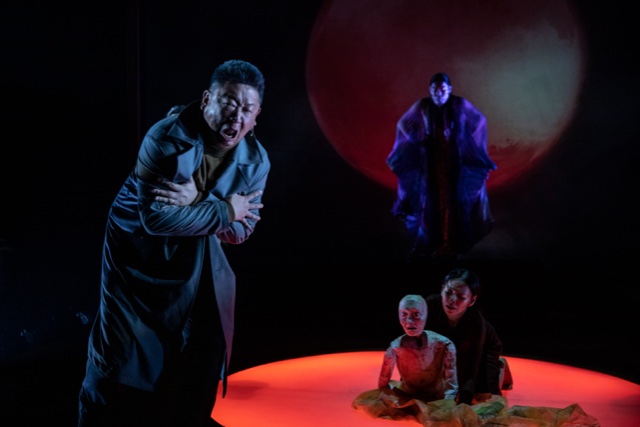 Wei Wu, Ju-eh/Jeucheng Chen and Takemi Kitamura with the puppet 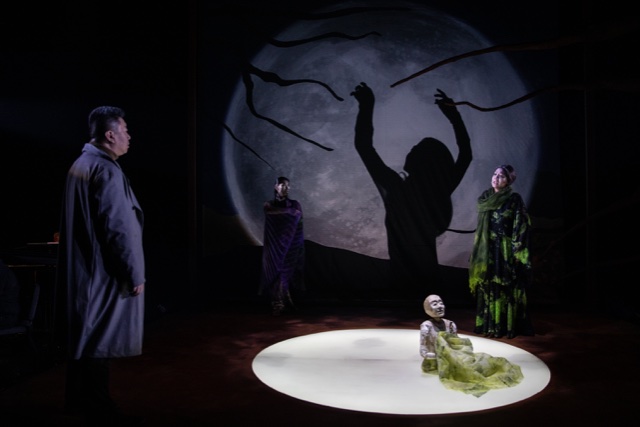 The silhouette of Takemi Kitamura caught in branches. Wei WU, Ju-eh/Juecheng Chen, and Nina Yoshida Nelsen with the puppet 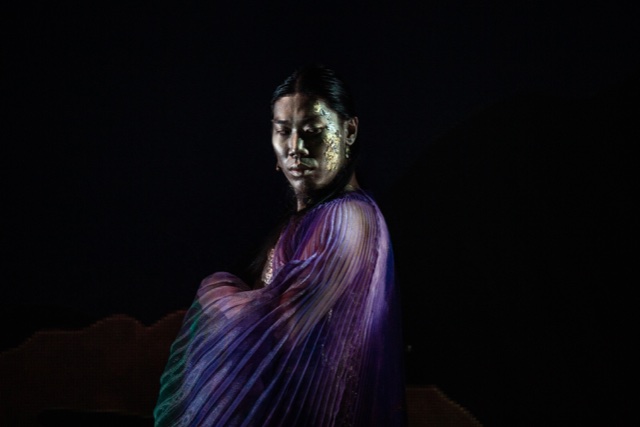 Blood Moon is a chamber opera created with consummate sensitivity and skill by a team of artists, including the composer, a passionate appreciator of Noh theater, and the prize-winning playwright, Ellen McLaughlin.  One of McLaughlin’s specialties is the adaptation of classic dramas for our time. The composer also likes to jump off from the past, and react to a work created many moons ago in the present now.

A 15th century Noh play about obasute, or dumping grandmas is the take-off point. This was the debatably common practice of carrying an elderly relative to a mountain and leaving the person there to die.

In one Buddhist allegory, a son carries his mother up a mountain on his back. During the journey, she stretches out her arms, catches twigs and scatters them. Her son will be able to find his way home.  “In the depths of the mountains,whom was it for the aged mother snapped, One twig after another?  Heedless of herself, She did so, For the sake of her son."

The composer has focused on a nephew’s guilt.  On the night of a full moon, the nephew returns to the mountain, and tries to make peace with himself for his abandonment.  Bass Wei Wu holds us in thrall as he forces himself to acknowledge his act and tries to gain forgiveness.  Ju-eh/Juecheng Chen is the silver-faced moon in purple robe, a counter tenor of course, says Fisher.

The mother is a triptych of figures.  Nina Yoshida Nelsen is her returning aunt. She sings in characteristic richness of her life.  The aunt is also represented by Takemi Kitamura, whose dance of the returning figure is startlingly present, seemingly improvised in the moment. She has with her a puppet in a long silk gown, which trails around the circle forming the moon on the stage floor. The three of them help us feel the eternal presence of the deceased relative.

Fisher is an enormously skillful and daring composer. In this opera, he uses an instrument to represent each figure in music.  A devotee of the harmonium, the overall soundscape has an Oriental aroma, but has clearly sounds its own tone.  Taiko drummers are important.  Set alone stage left, they introduce the opera, speaking to each other in beats.  At the climax of the work, they enter full force again. They have a jazzy, urgent feeling in their message.

Credit must be given the playwright Ellen McLaughlin for this rich opportunity for visual depiction in the context of a dramatic arc.  The nephew’s guilt drives the piece.  Its resolution is not clear, but the overall work still satisfies.  The director Rachel Dickstein has an extraordinary touch for both realizing the dramatic story and punctuating it with detail, rhythm and freedom.  She acknowledges a debt to McLaughlin and also to the actors and dancer who are able to take off from work on paper and add meaningful and moving bits to the work.

Fisher has a talent for the lyric line and the almost spoken texts which advance the story.

We are met entering the theater by a dramatic, leafless branch.  The moon rises, and at the height of the opera is eclipsed by the sun to become blood red.

Steven Osgood is, among his many talents, a specialist in contemporary music. He managed to conduct both parts of the stage, and comfortably to include the improvisation suggested by the composer.

Blood Moon is a highly satisfying evening of opera seamlessly realized in its premiere.  It is acoustically enhanced (miced).  Beth Morrison, the producer, remarks that 60 of 65 of Prototype’s new operas have been amplified. It certainly enhanced Blood Moon in its Baruch Performing Arts Center premiere.