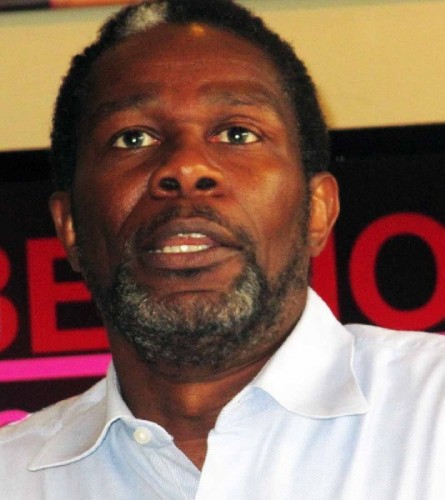 John Douglas Thompson is developing a one man play about Louis Armstrong and his manager Joe Glaser. Giuliano photo. 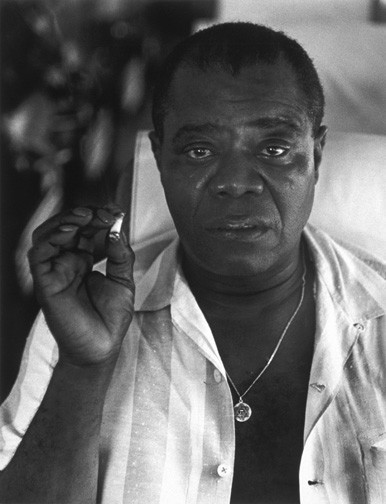 Louis Armstrong wore the Star of David given to him by Joe Glaser. Photo courtesy of Herb Snitzer. 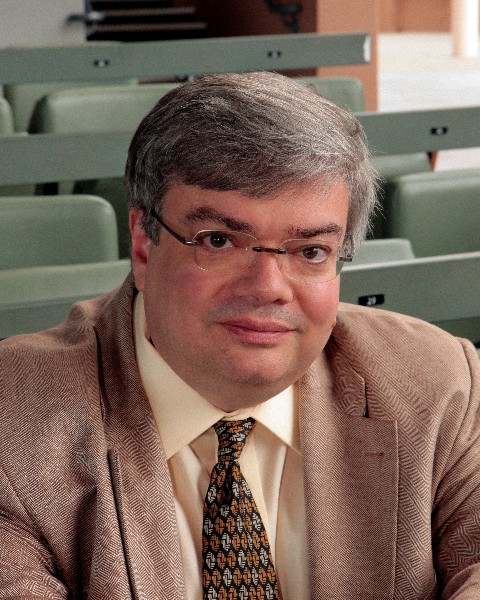 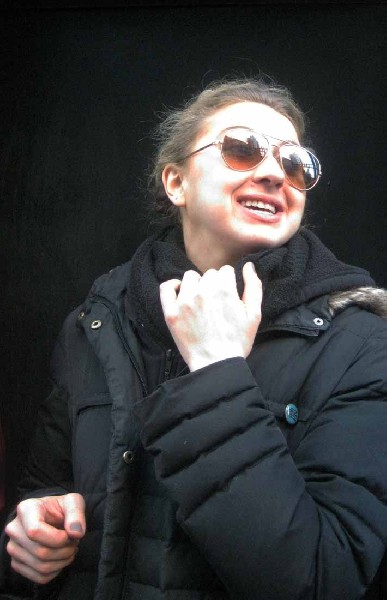 Nina Ariadna vaulted from Off Broadway to Broadway with Venus in Fur. Giuliano photo. 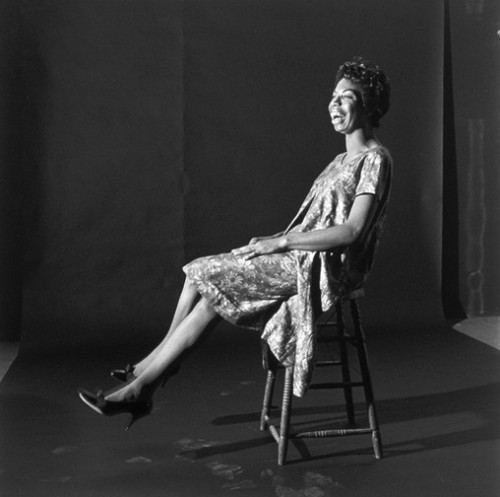 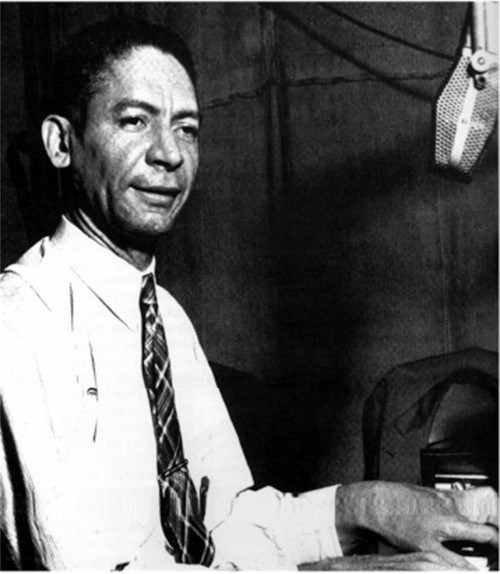 Charles Giuliano Having followed and discussed your career for the past few years when will we see the game changer? The level of recognition that will earn you marquee status on Broadway?

John Douglas Thompson That’s not really something I think about. I’m comfortable with where I am and things will progress in their own time. If that’s supposed to happen it will. I am just hoping to play interesting roles and who knows what the future will bring. Frankly, I never thought I would be where I am today. The chance to do the kind of theatre I am doing in New York. I never saw my career taking that kind of shape.

CG Every now and then there is a breakout story. A couple of years ago I saw Nina Ariadna at the Classic Theatre Off Broadway in Venus in Furs. At the time it just seemed  obvious that she would take the play to Broadway. It was a couple of years for that to happen. As of last week the show was running 97% capacity and has earned rave reviews. So it can happen.

JDT  I have seen that play twice.

CG Producers were reluctant to put their money behind an unknown actress. Last year she was a Tony nominee in Born Yesterday. This year she has returned to Broadway. When I first saw her Off Broadway my sense was that this is a superstar.

JDT I was so impressed by her. I thought ‘Oh my God’ who is this woman? I was fascinated by the play but it took someone like her to take it off the page. If you didn’t have her that play wouldn’t work. If they do the play in regional theatre it will be tough to cast. When she’s done it just put it on the shelf man. It’s over.

CG That leads us into Satchmo the one man play which you will perform this summer at Shakespeare & Company. Is this the first time you have done a world premiere?

JDT I think so. I have done regional premieres. This would be the first time I’m working on a new play from scratch.

CG How did this project come to you? Who approached whom?

JDT Terry Teachout of the Wall Street Journal was a jazz musician for some time before he became a journalist. He has always been fascinated by Louis Armstrong. He wrote a book about Armstrong called Pops. It was a New York Times best seller. Among those in the know it is considered a real strong book about Louis Armstrong. It covers his whole career and not just a section of it. Someone came up to him and said “This is a great book have you ever thought about making a play out of it?” At that point he hadn’t thought of it but it was a good idea. As he developed the play he contacted me and asked if I would like to work on it with him. So that’s how this production came about. We talked with Tony Simotes of Shakespeare & Company. I thought wow, Armstrong hasn’t been given his due. In a sense it reminds me of Nina Simone. She wasn’t as large but she is of icon status as Louis is.

JDT Well but for her contributions to the form. And her music I feel she hasn’t been given her due. The same thing with Louis. I feel it may be that Uncle Tom thing. African American resistance may have berated him. They may have felt he wasn’t doing what he should be doing. He was losing a lot of the black audience at that point in his life because of the Uncle Tom thing. There was a transition in the culture with the fight for civil right and Louis may have been caught in that. I don’t know. It was a matter of several factors and I hope to understand it better but I felt he never got his due. Here’s a guy who was in over a hundred movies. There was never a movie or documentary about him. There’s not enough out there in the public domain about him since he’s passed. This play could be something toward that.

CG You say that Armstrong was marginalized as an Uncle Tom. He got dissed big time by Dizzy Gillespie and Miles Davis.

JDT Yeah that hurt him.

CG With Nina Simone there was a different issue. Perhaps she was marginalized because of her attitude particularly toward the white audience. Nina was a piece of work.

JDT No doubt about it. But also an extraordinary artist. I’m a big Nina Simone fan. When she passed away I didn’t even know about it. It wasn’t big enough news to report. Somebody told me and I said, no, she’s still here. No, she died last week. I said, what! Why don’t I know this? She’s one of my favorite artists.

CG In an e mail I mentioned to you that I have a friend Herb Snitzer, a photographer for Metronome Magazine, who was a friend of Armstrong and particularly close to Nina Simone. He said that Nina was very difficult and they had an on and off, love/ hate relationship. I would love to connect you with Herb particularly as he might give you some insights to Armstrong.

JDT I am reaching out to people who knew Armstrong or have deep insight to who he was as a person and artist. This individual you bring up sounds like the perfect person to talk to.

CG The jazz critic Bob Blumenthal would be a good person also you might track down Stanley Crouch who is a professor at Rutgers University.

CG At this point what do you know about him?

JDT At this point I’m kind of green on him. I know some of the music and have been downloading a lot of the music. I’m getting ready to visit the Armstrong museum in Queens. I’ve read Terry’s book. I’ve seen quite a few snippets on You Tube. Louis Armstrong and Danny Kaye. Louis Armstrong and Bing Crosby. Armstrong and his group playing in Europe. Armstrong in Africa. I have been watching those quite a bit. What makes Terry’s book so special was that he was the first journalist with access to all these audio tapes. When audio tape technology first came out Armstrong was fascinated by it. He taped a large portion of his life. He taped a lot of concerts. He taped parties. Discussions he had with people. It’s all there. Speaking in his voice into this thing. It’s an aspect of the play when he presses the tape machine. So it’s not just a conceit. He actually did tape a lot of stuff. Terry was the first journalist to have access to all these audio tapes. He listened to them and that’s how he created the book. It is kind of Louis in his own words in a sense. So me, Terry, and the director are going to the Armstrong house this Friday. We’ll be doing some more research and connecting with that quite a bit. Between now and doing the show I will often be at the Armstrong Museum. Right now I have an outline from the play and from the book. From the music and from the museum. I have an outline and obviously it’s up to me to fill it in as we move ahead. As I continue to research, read, and think about Louis Armstrong the man and think about how we are going to approach this play.

CG Your family is from Montreal.

JDT My family is actually from Jamaica. We spent time in Montreal. We moved from Jamaica to England and from England to Montreal.

CG  From having lived in Montreal are you fluent in French?

CG It relates to the Creole question. To understand Armstrong you have to understand New Orleans. It was the culture he grew up in. It is a unique and complex environment unlike any other city in the United States. I have discussed this at length with my Haitian friend Robert Henriquez. New Orleans had three tiers: White, Creole and Black. There are other elements including Hispanic and Native American. The key word to understanding new Orleans culture is gumbo. Which means a combination of all of the ingredients and flavors. It underscores the importance of Mardi Gras when all of the elements come together in a celebration of the music, dance, food and culture. The boundaries dissolve and anything is possible during Mardi Gras. With Reconstruction after the Civil War there was a paradigm shift. This had a particular impact on the status of the Creole people. It is something that Jelly Roll Morton discussed in the Library of Congress sessions with Alan Lomax. And is a part of the book which came from that Mr. Jelly Roll. It should be a part of your research to hear the Morton sessions and to read the book. Morton, who was Creole speaks negatively about Armstrong. They may well be viewed as rivals.

JDT There’s a little bit of that in the play which is obviously a condensed version. There is more in the book about Jelly Roll Morton.

CG I have some but not all of the Library of Congress albums which were released by Riverside Records. I played them so much that they are not in great shape. They were reissued by Rounder Records on CD but may now be out of print. I have been meaning to buy the set. They are amazing for their flavor and insights. It is the greatest documentary material on early jazz and the origins in New Orleans. He was an outrageous character and states that he alone invented jazz. His position was that the Creole players were the best musicians. Like Sidney Bechet. In the Lomax series he demonstrated how the music evolved from the dance bands for Creole cotillions. His version of “Tiger Rag” illustrates that. He implies that piano was a ‘sisified’ instrument played by women. In Armstrong’s Hot Five Lil Hardin, his second wife, was the pianist. His banjo player, Johnny St. Cyr, was Creole and probably the clarinet player, Kid Ory. Morton stated that he tried exclusively to hire Creole musicians for his band The Red Hot Peppers.

The French connection, which I asked you about regarding your time in Montreal, is fascinating. For example, Sidney Bechet, the seminal soprano sax player emigrated from New Orleans and lived for many years in Paris. He had a very successful career there and influenced European musicians. The key three to understanding the music of New Orleans would be Armstrong, Morton and Bechet.

Of course there are major early players like King Oliver who Armstrong started with in Chicago and the trumpet player Buddy Bolden who never recorded. (He was active from 1900-1907 before being hospitalized with mental disease until his death in 1931. The first jazz record “Livery Stable Blues” was released in 1917 by the white band The Original Dixieland Jass Band. Jass later became Jazz.)

For the jazz of his generation Armstrong was the signifier who defined its shape. In that sense The Hot Five and Hot Seven (1925 to 1929) are some of the most important recordings in the history of jazz.

JDT I used to have the Columbia CD which was the best of the Hot Five and Hot Seven but I couldn’t find it. So I have downloaded the music and am listening to it.