Set for February 12 to March 1 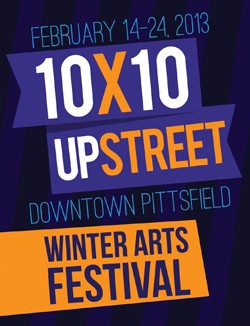 Barrington Stage Company, has announced casting for the 10-minute plays for the 4th Annual 10X10 New Play Festival, with performances February 12 through March 1, as part of the 2015 10X10 Upstreet Arts Festival.

Jessie Shelton - is an actor/singer/dancer/creator based in NYC. Some highlights include The Power of Emotion (La MaMa/Under the Radar), Party in the USA (Edinburgh Fringe/JV Squad), A Christmas Carol (Off-Broadway) and Diablo (In The Basement Theatre Co.). Jessie received her BFA in musical theatre from Carnegie Mellon University and is a founding member of The Astorian Workshop and In The Basement Theatre Co. She is also a proud member of Actor’s Equity/SAG-AFTRA. This is her Barrington Stage debut.

Zach Wymore – BSC debut. Regional Theatre: Remix: 38, Our Town, A Christmas Carol (Actors Theatre of Louisville). Other Theatre: Mariposa and the Saint (BAX), Shimmer, The Family Project, and Hello, My Name is You (Kuntz and Company in Bellingham, WA). Member of the 2013-2014 Acting Apprenticeship at Actors Theatre of Louisville. Company member of The Associates Theatre Ensemble. BA in Theatre from Western Washington University.

Tickets to the 10X10 New Play Festival go on sale January 8. Performances are Thursday, Friday and Saturday at 7:30pm, with matinees Saturday and Sunday at 3pm. Tickets are $25 Thursday evening and Saturday/Sunday matinees; $30 Friday and Saturday evening. Added performance Sunday evening March 1 at 7:30pm. The first two low-priced preview performances on February 12 and 13 at 7:30pm are $15 for all tickets. Reserved seating. For more information, call the Barrington Stage Box Office at 413-236-8888 or visit www.barringtonstageco.org.

Berkshire Gas is the lead sponsor of the 2015 10×10 Upstreet Arts Festival.

For more information, visit discoverpittsfield.com/10×10, find 10×10 Upstreet on Facebook, or contact the City of Pittsfield’s Office of Cultural Development at 413-499-9348.