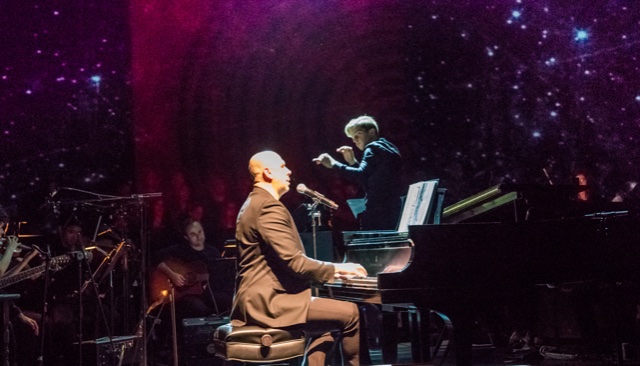 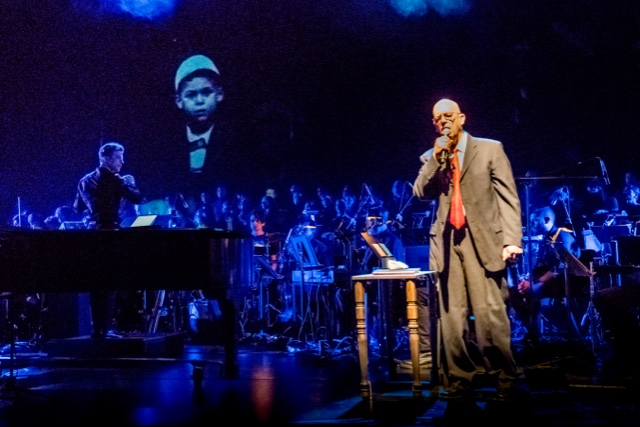 Rinde Eckert as Gustav, a holocaust survivor, and father of Schonfeld 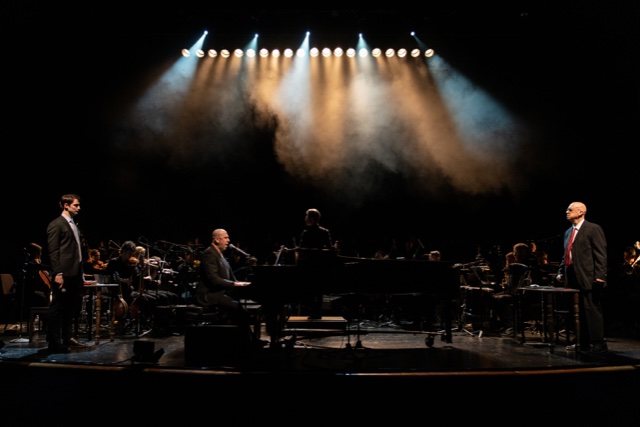 Iron & Coal is a live rock show presented as part of the Prototype Festival at the Gerald Lynch Theater in New York. The title refers to an iron will to survive, but also to the charred emotions that remain after a concentration camp incarceration. The songwriter Jeremy Schonfeld tells the story of his father’s arrival in America at 11. He searched for his place in our sun, and especially to answer the question: for what purpose did I survive when so many others did not.

Loud, driving, sometimes more thoughtful and clearly reflective, it is the songwriter’s struggle to come to terms with the impact of the holocaust and concentration camp survival on his family.

You feel like you are in a nightclub at the Gerald Lynch Theater.The massive force of the Brooklyn Youth Choir, and MasterVoices and the Contemporaneous band shot through with rolling multi-colored lights piercing the darkness is exciting.  Schonfeld’s music has a bright piano sound with extensive use of synthesizers.  Downbeats are looped through the songs.  The powerful music mixes genres: classical, jazz, bluegrass, Motown, Gospel, rock and klezmer.

Musically the question is raised:  Is there no other way to blot out the past than to blast out our ears.  Yet the work is intimate.  The answer to the question is Yes. Here is a father’s love for Gustav, his son. In telling him in Auschwitz to say he was sixteen so that he could be useful to the German cause, he saved the boy who was nine at the time.  The boy becomes a father to the singer and creator of this work, who struggles before us to come to terms with the family history.  The purpose is fulfilled in a fourth generation, as Gus, the young son of Schonfeld, sits in the audience, receiving his father’s wisdom.

Schonfeld sets us up with the liturgical prayer “Yedid Nefesh”  and then a boppy rock song called “Good Man.” The evening moves from the liturgy of the temple to the anguish of a contemporary 'rock' son. Director Kevin Newbury and Music Director David Bloom move us easily if not always clearly from one mode to another.

The shadow of Jeremy’s father looms over the work. Of his father, Schonfeld says,  “He was clinical and he was scientific and his approach was very different than mine, which was very much the heart on the sleeve, the emotional, the raw and the trying to dive in, peel the layers of the onion, that kind of thing. So I think that he really valued the idea that he had a son who approached the subject matter in a very different way than he did.”

Rinde Eckert portrays Gustav as a man of towering moral stature against whom Jeremy cannot but measure himself against. And Jeremy’s musical vocabulary for the emotions in that complex father-son connection is a generationally apt rock. Daniel Fowler is clarion-clear as Gustav in his youth. Schonfeld’s voice is gritty by contrast.

Stories of the Holocaust have been told in many forms, including opera.  Royal Covent Garden presented Nicholas Maw’s Sophie’s Choice almost two decades ago. The work failed to integrate song, story and orchestration, although the libretto stayed close to William Styron’s book and was strong.  “Lost Childhood” by composer Janice Hamer and librettist Mary Aztael. is based on both the memoir of Yehuda Nir, a prominent psychoanalyst and Holocaust survivor. Nir’s friendship with the author Gottfried Wagner, a man who has struggled with the legacy of his great-grandfather, the composer Richard Wagner. This opera presents fictionalized characters of both men. The opera explores Judah/Nir's memories of significant moments in his wartime Polish childhood, as he shares them with an increasingly uncomfortable Manfred/Wagner, who is struggling to come to terms with his own family’s culpability in the genocide. In a tender and profoundly suggestive tale, the men realize that as the Nir character recounts his experiences and Gottfried struggles to comprehend them emotionally, a process for healing begins.

Now we have a multimedia rock opera that rocks. “I didn’t set out to create this piece that I liken to a cross between Bernstein’s Mass and The Wall,” says Schonfeld. “The intent was to cover the emotional landscape. I really was just trying to tell my story as specifically as I could.”

Songs, text talk from the father as a young man and as a mature one, superb, encompassing graphic images which are huge, and yet as subtle in their barbed wire message can be, enhance the show.  Schonfeld moves us.  He may not answer questions, but the joy he takes from his own son clearly is one reason to go on.