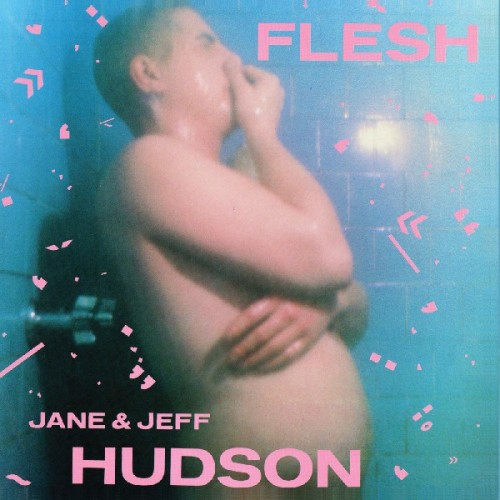 The landmark, self produced album Flesh has been reissued on LP and CD. 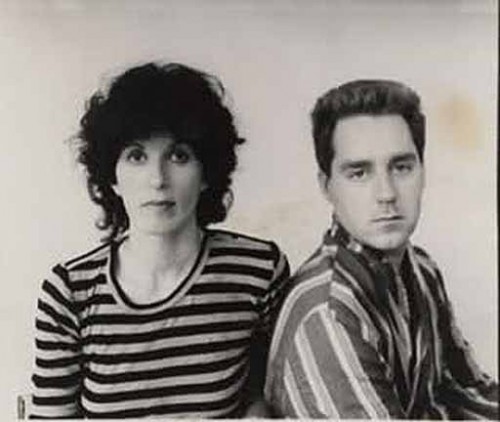 Jane and Jeff way back when. File photo. 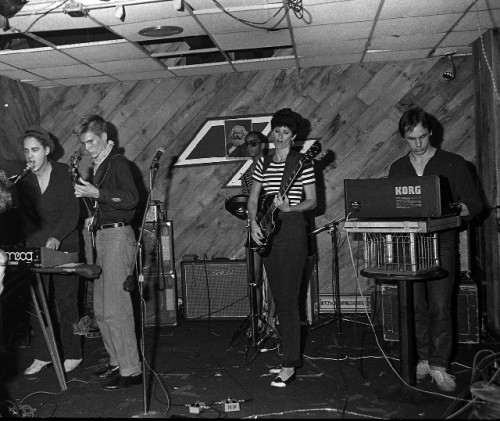 Performing as The Rentals with Winston C. Robinson on drums. Giuliano photos. 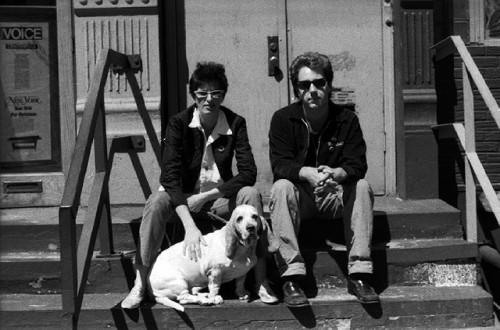 On the steps of their New York loft in 1979 with the pooch Jelly. 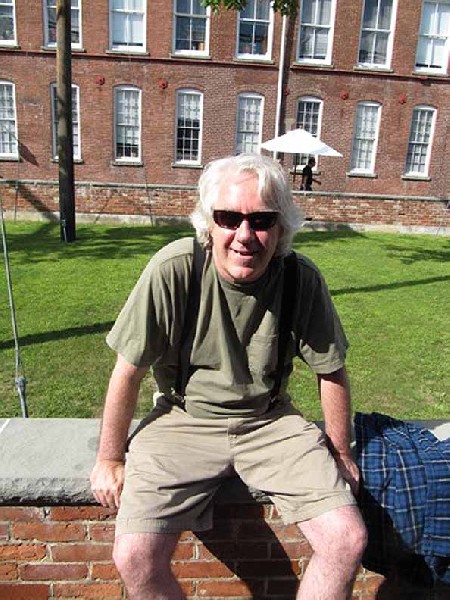 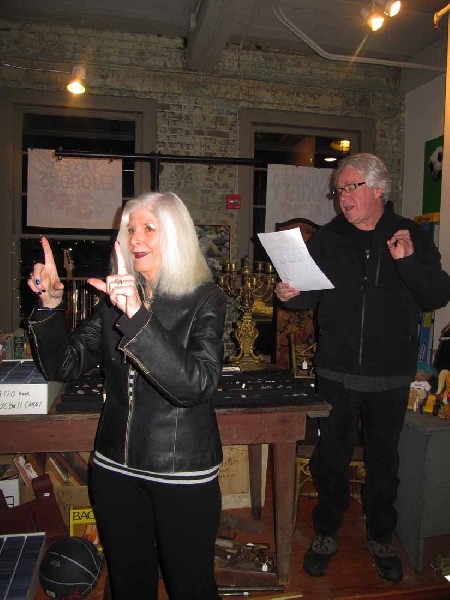 In the Mass MoCA antiques shop prior to the show recalling highlights of their career. 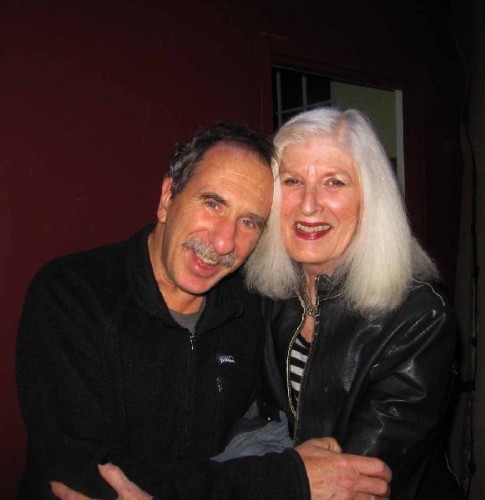 Benno lured many of us to the Berkshires. 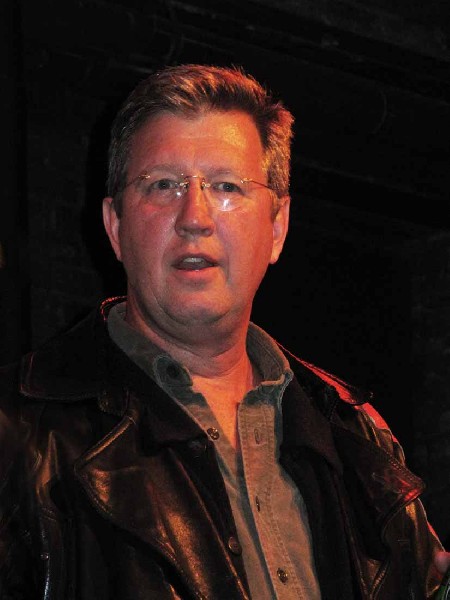 Mass MoCA director Joe Thompson introduced Jane and Jeff then hung out to dance and boogie. 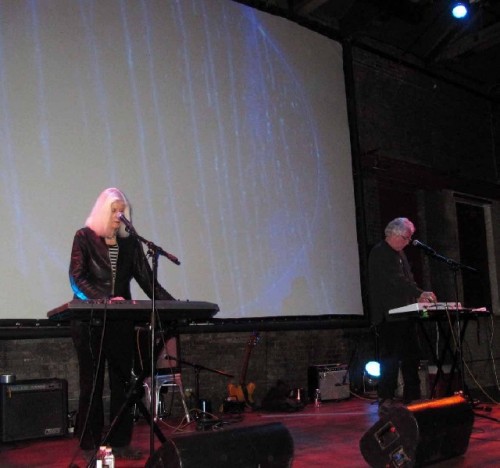 Jane and Jeff on stage at Mass MoCA. 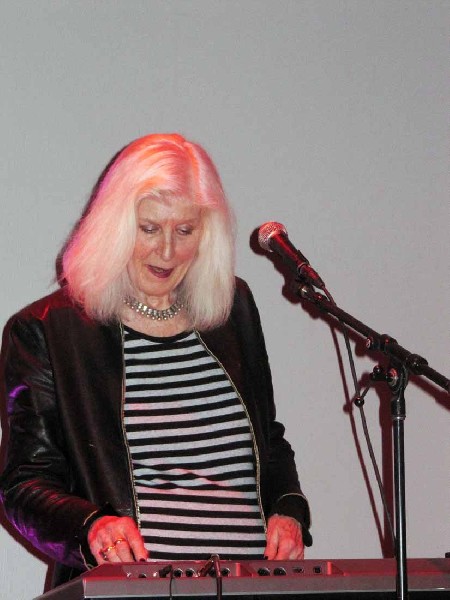 Jane at the keyboard. 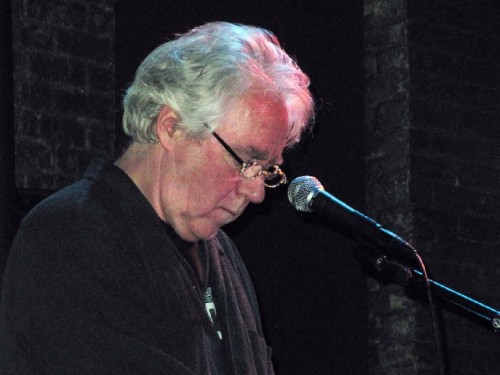 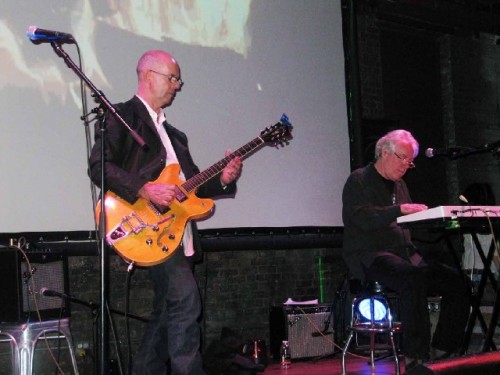 Rocking out to Space Bar Jeff is accompanied by the sizzling Irish guitarist Karl Mullen. 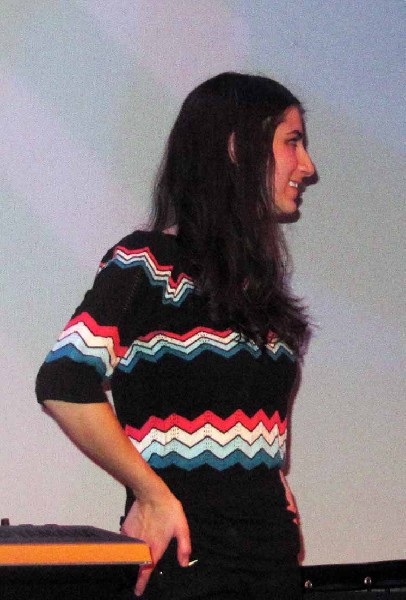 The video projections were created by Aurora Halal.

The B-10 club room of Mass MoCA was filled to near capacity last night for a performance by antique rockers Jane and Jeff Hudson. It was one of the most anticipated and heavily promoted events of the winter season.

It was a festive celebration on a bitterly cold Berkshire night. The evening, which also marked Jeff’s birthday, began with a toast in their antiques shop Hudson’s on the Mass MoCA campus.

For assembled friends Jeff read from a prepared text which summarized their career highlights as visual artists, teachers at the School of the Museum of Fine Arts, gallerists of the seminal project space Atlantic Gallery, and music makers.

A motive for the rare performance was to celebrate a life in art which they “retired” from when relocating from Jamaica Plain in Boston several years ago. They are also promoting the reissue on vinyl and CD of the self produced album Flesh which they released some 30 years ago.

The PR blurb that accompanies the reissued album states that “In 1981, they started performing as a duo and began releasing post-nuclear electronic pop songs under their own names. 1981 saw the release of the “World Trade” EP as well as the “No Clubs” 7″, followed in ’82 by “Attack Under Attack” which featured the first appearance of “Los Alamos” which would reappear on their debut LP.

“The duo reached their pinnacle with 1983′s seminal “Flesh.” Perhaps one of the United States biggest achievements in the entire “synth” movement of the era.

“Completely self produced by the band, the record has since been oft-cited as a groundbreaking and pivotal LP of the post-punk era, who’s original copies are now heavily coveted by collectors. This is the first time since the original issue that “Flesh” is reappearing on the vinyl format as a co-release with Dark Entries record.”

I first met Jane some four decades ago when we were hippie guests at the Sheffield home of the seminal photographer and matrix for a generation of artists, Benno Friedman. He and his wife Stephanie were on hand last night. Before the set he told Jane, with an apology, that it was the first time he had heard her perform live.

Of the senior citizens gathered to cheer on their plucky peers I have, hands down, seen Jane and Jeff perform more times than anyone in the room. Initially as The Rentals who, with Pseudo Carol on drums, famously opened for The Clash at the Harvard Square Theatre during their first American tour.

As Jeff told us before the show after that launch, which was mentioned in a front page story in the Village Voice, they headed straight for New York. They toughed it out in a loft on Broome Street for the next two and a half years. Wisely, they did not give up their gig at the Museum School.

Their connection to the art school remained a thread in their lives and careers. They straddled the fields of art and music. Their students played a role in their creativity. It is remarkable, for example, that the legendary photographer, Mark Morrisroe, provided the cover image for Flesh. Jeff insists that it does not show him nude in the shower; although the resemblance is remarkable.

Morrisroe, who died young of AIDS, was their student as was Nan Goldin, Jack Pierson, and deceased gallerist Pat Hearn.

In New York they hung out at CBGB’s and opened for some of the well known bands of the era. The vintage photo accompanying this article was shot on their stoop in New York, with their remarkable pooch Jelly, in 1979. They were on the scene during the post Sex Pistols, Ramones, Debbie Harry era when the music was changing.

While The Rentals performed with instruments, Jane on bass, when they reconfigured themselves as a duo, Jane and Jeff, they experimented with then new synthesizers and drum machines. There was the dual impetus of exploring new technical possibilities as well as not having to deal with or rely on band members. Since they generally used their students there were growing pains.

There was always a complexity in which they were simultaneously teachers and mentors as well as colleagues and collaborators with younger artists and musicians. It was both admirable and problematic. Particularly for peers who were of another era and sensibility.

Which was emphatically the case last night. There was a kind of disconnect between the some 200 Berkshire folks gathered to hear their friends and neighbors. Few had ever heard their music or knew what to expect. They listened attentively, caught the drift, but seemed mostly flummoxed by what was going on.

Particularly as the mix that pushed up the two synthesizers and rhythm tracks completely drowned out and obscured any possibility to comprehending the lyrics. What we experienced was a pulsing throb of robotic rhythm with accents produced by keyboards with a great range of special effects. The now much advanced instruments are capable of simulating the impact of an army of musicians. While it is impressive on one level there was an absence of the all important human element that connects audiences to creators.

They have been described as pioneers of post punk minimalism. With some concentration one could configure a confluence between the anarchy of the Sex Pistols, particularly in Jeff’s growling vocals, and the orderly repetitions of Philip Glass. That is indeed a formidable mesh.

This morning I listened to Flesh which had the advantage of being able to comprehend the compelling lyrics of “op. inst” which opened the set and arguably their seminal track “Los Alamos.” In the first instance I came to understand what she was relating in a variety of languages. Jane was reciting the operating instructions that accompanied some device. In the latter Jeff chants about making a bomb.

These lyrics were further accented by the video projections of Aurora Halal. Other than The Books, two summers ago during the Solid Sound Festival at Mass MoCA, when was the last time you saw a band perform with videos?

A highlight of the set occurred when Jane abandoned the keyboard and sang a deconstructed version of the Bossa Nova standard “The Girl from Ipanema.” It was a stretch from the classic Getz/ Gilberto version but the audience responded to actually recognizing a tune.

I was deeply disappointed not to hear her famous solo single “Gertrude Stein, Gertrude Stein.” It has long been one of my favorite tunes from their remarkable oeuvre.

Before and between sets there were vintage music videos of the era of Flesh particularly other synth/ rockers like the American band Devo and the German one Kraftwerk.

It did indeed provide some context.

Jeff who was a key exponent of the first generation of video artists made a living shooting  music videos for Boston musicians.

Listening to the vintage LP this morning, and hearing the live performance last night, I was amazed at the similarities. Indeed, way back when they were on the cutting edge. Decades later they now mesh nicely with contemporary experimental music. Curiously, they have morphed from avant-garde to mainstream.

In that context it is not surprising that their music endures and is being revised.

After an intermission Jeff returned with the galvanic Irish guitar player Karl Mullen. He moved to the Berkshires during the past year. They have teamed up as Space Bar and perform compelling dance music.

Before the set Mullen invited the audience to come and dance in the area in front of the stage. There was initial reluctance but gradually more and more audience members, mostly women, got their groove on.

Including Mass MoCA director Joe Thompson who had introduced Jane and Jeff. He was clearly in the spirit of the occasion.

Space Bar is available for weddings, birthdays, and hippie funerals.