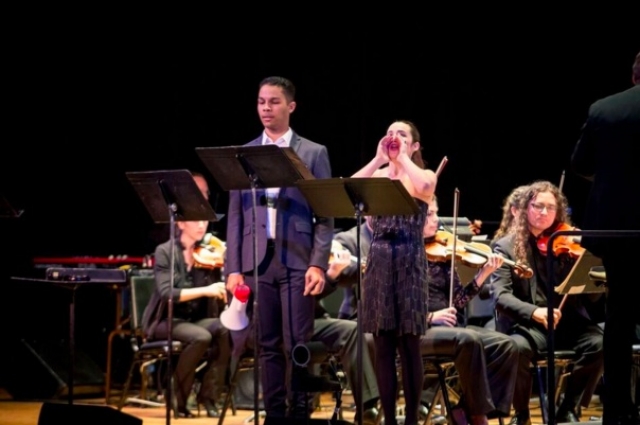 Lauren Worsham explores the human voice as written by Wang lei. Worsham is the real deal. She is a first-rate actor ho can bring the subtleties of drama into her voice. Keith Browning has his horn. 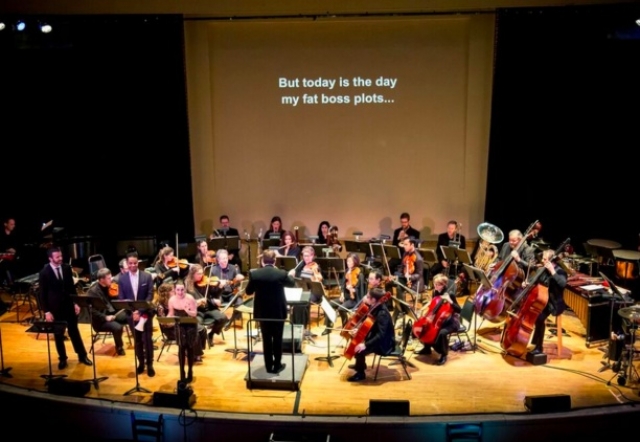 Rated R for Rat with Sonos Chamber Orchestra. Percussion is special. The steady dramatic rolls of the drumbeat were perfectly completed at the conclusion of a phrase. 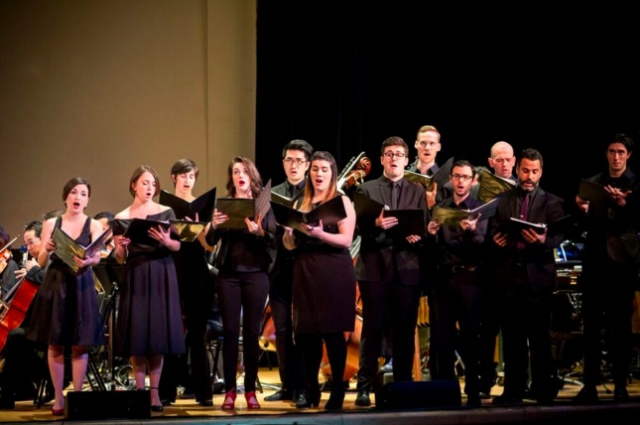 Members of the Chorus Chameleon performed in The Machine and Before the Night Sky. Some singers stepped forward into solo roles. Voices were excellent as a group and in individual parts. 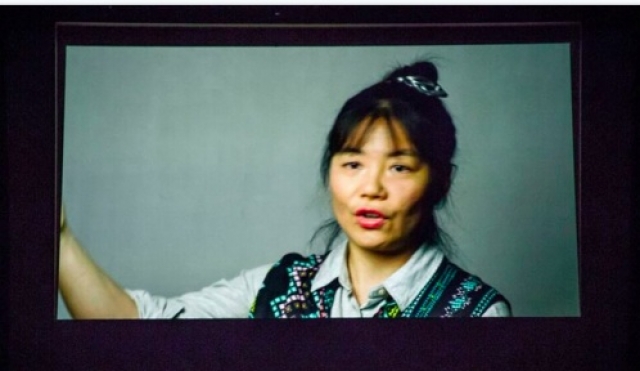 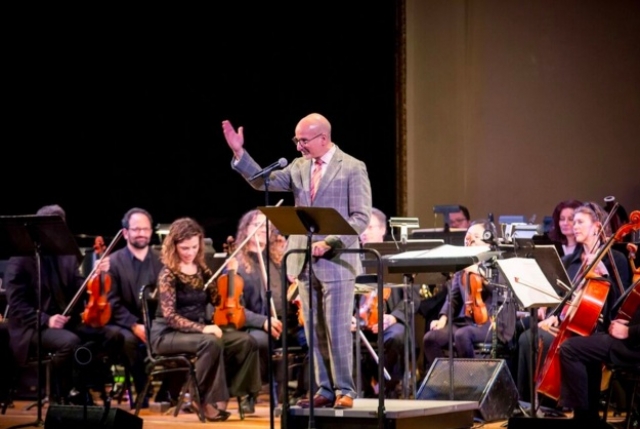 Marc Sorca, brilliant head of Opera America for twenty-five years. He has convinced donors and artists to step forward and help opera live but making it anew. 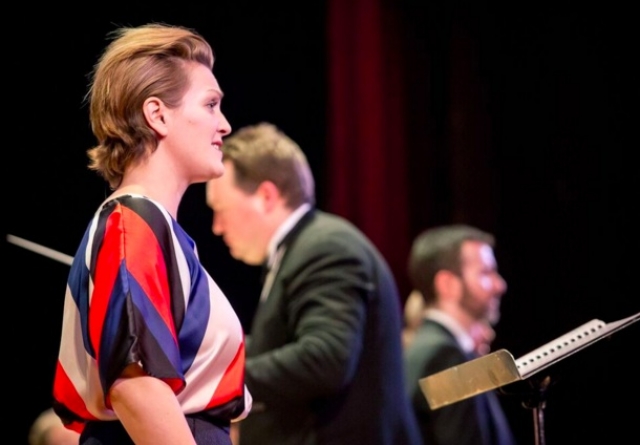 Charlotte Salomon, sung gorgeiously by Brenda Patterson, is a fragile yet strong young woman who survives family disasters by becoming an artist only to be killed in the Holocaust. 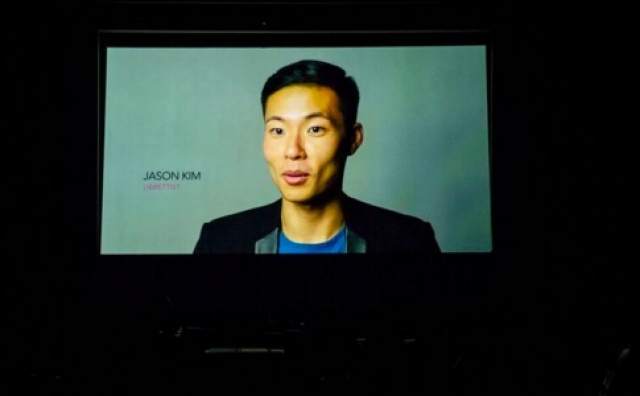 Jason Kim wove the story of a woman who would be perfect and finds perfection as a robot. 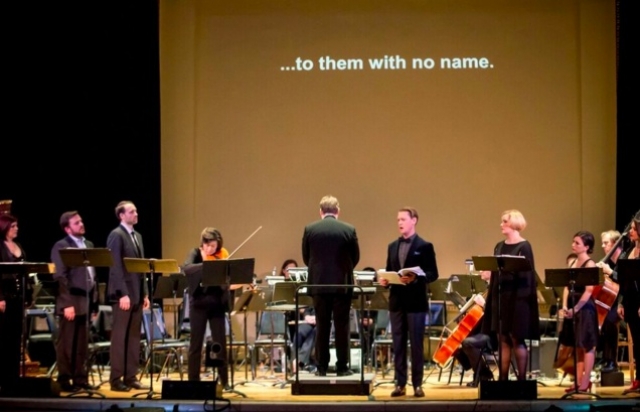 The Nefarious, due in Boston in November, concludes with a touching duet between viola and singer. The tale of two men who profited handsomely by killing homeless, anonymous people and selling their bodies for research at medical schools, s told from the point of view of the slain characters.

Opera is again a cutting edge art form. Marc Scorca, the CEO of Opera America for twenty-five years, has helped place the form in future mode.  New works by contemporary composers, audience outreach, political savvy deployed to get money from foundations and government have all yielded results on display at Town Hall this week.

Excerpts from five new operas were presented. The composers ranged from young to older. The librettists were known and unknown. Many women were represented. Ethnicity was varied. Musical texture often was similar, with heavy use of percussion and brass.

Yet each piece had a theme. The first was reminiscent of Margaret Atwood, with mysteries of odd birth and sexuality explored. One work was in German and had been inspired by an art book the composer found in the Strand book store.  In it, a young German girl fights her way through serial suicides of relatives to find solace and salvation in making art.   The wonders of the night sky were humanized as the twin constellations, Castor and Pollux. Can we achieve perfection by becoming robots was a question raised in Machine. Boston readers can look forward to Julian Grant’s The Notorious but Highly Profitable Enterprise of Mr. Burke and Mr. Hare, a dark story of murder for money, premiering in November at the Boston Lyric Opera. Bodies for research are coveted in medical schools and Mr. Burke and Mr. Hare, entrepreneurs, take to killing and selling. The star of librettists, Mark Campbell, has jointed Grant in creating this opera.

You leave an event like this sensing that opera is thriving.  And it is. But it is chamber opera, more intimate and best set in smaller halls. These operas are not for the Metropolitan which is much too large and distancing. It is not built to invite. Although many of the oversized stories we heard and saw were dark, they were also inviting.

Scorca noted that just this year we have had many new operas produced.  Moby Dick (a few years old!) and It’s a Wonderful Life by Jake Heggie.  William Bolcom has Dinner at Eight coming up in Minneapolis. Kevin Puts’ Silent Night has been produced by Dallas and Atlanta. Carlisle Floyd’s work is mounted throughout the country. Particularly adventuresome are St. Louis and Philadelphia Opera, whose Breaking the Waves by Missy Mazzoli played to packed houses in New York last week after a much admired world premiere in Philadelphia in the fall.

The Metropolitan Opera will sink or swim filling seats to the tried and true operas of the last few centuries. All their griping about audiences has more to do with lack of innovation and unappetizing 4,000 seat house. Out in the real world, opera is alive and well. Brava!