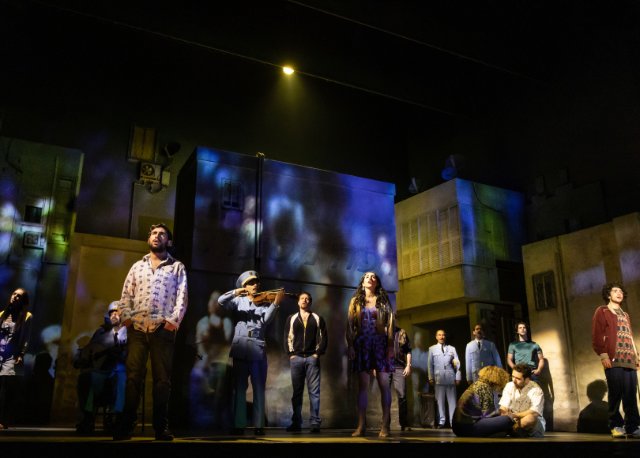 National tour of The Band's Visit.

Resist the urge to hibernate during the dark, cold wintery days. If you do, you will miss many promising theater productions and events.

Right now, East Haddam is buzzing with activity. In January, with Goodspeed’s spring production still months away, you might think it would be quiet on the Goodspeed campus.

Yet it is alive with actors, directors, composers, lyricists and book writers.

As soon as it becomes January, rehearsals start for the Festival of New Musicals, which is entering its 15th year. The purpose is let the creative people behind new musicals see their works performed in front of an audience.

Each year, three shows are chosen. They are rehearsed with professional directors and musical directors and cast with students from the Hartt School at the University of Hartford and the Boston Conservatory of Music. These talented young performers learn the roles for a one night only show. In its history, the Festival has produced one certifiable Broadway hit – Come from Away – as well as a handful shows that have been licensed for productions in regional theaters, schools, universities and community theater companies. Band Geeks which started at the festival was produced at Goodspeed’s Terris Theatre and recently the cast got back together to record the show.

This year’s festival, Friday, Jan. 17 to Sunday, Jan. 19, offers a diverse selection of new works. The opening night production is The Tattooed Lady with book by Erin Courtney and Max Vernon with music and lyrics by Vernon. Both have heavy duty credits – Courtney’s play A Map of Virtue won an Obie Award (the off-Broadway award) and Vernon’s musicals have received the Lucille Lortel Award, Richard Rodgers Award and multiple other award nominations.

On Saturday evening, a semi-staged performance of Private Gomer written by Marshall Pailet tells the story of a WWI soldier, who despite a profound hearing loss, is a top rated sniper. Pailet also had had several musicals produced off-Broadway picking up multiple award nominations.

The Festival closes on Sunday with Grow about twin Amish sisters who on their exploration of the modern world end up helping a marijuana dealer run his operation. The book is by Matt Murray, music by Colleen Dauncey and lyrics by Akiva Romer-Segal.

In addition to the three performances, there are seminars and symposia on various aspects of musical theater. These include what is described as “a deep dive” into the new musical Anne of Green Gables that be produced this summer at Goodspeed. Another seminar is on new and distinct voices of musical theater; a third features an interview with retiring resident musical director Michael O’Flaherty.

Two symposia will look back at the Festival’s history and forward to the new works scheduled for the Terris Theatre this year.

Two recent Tony winning musicals plus a Pulitzer-prize winning musical are on the theater schedule in the next six months; I can’t wait to see them all, plus a few others. In March, the small theater MTC (Music Theatre of Connecticut) in Norwalk is producing Next to Normal which won the Pulitzer for drama in 2009. This show about a mother, her mental illness and her dead son, should work beautifully in the intimate space; the audience is on three sides and never more than four rows from the stage.

It will be interesting to see if the 2018 Tony winner, The Band’s Visit works on the large Bushnell stage when it stops there in April. I love this musical, but it is a small, intimate and quiet show; no big choreography, extravagant sets, huge chorus. It just tells a moving story of people coming together. I’m curious not only how it works on the large stage, but how audiences respond to this show that violates so many expectations for musicals.

The 2017 Tony winner, Dear, Evan Hansen arrives at the Bushnell in May. This story of a lonely high school student, a dead fellow student and social media propelled Ben Platt to stardom.

Another Pulitzer winner, South Pacific is one of my favorite musicals – that gorgeous Rodgers and Hammerstein score contains so many wonderful songs. Director Rob Ruggiero is known for his ability to make these big shows not only fit on the Goodspeed stage but seem more personal. I’m sure he will do it again in April when this show opens.

But there’s even more musicals I am anticipating with pleasure. Anastasia wasn’t a great musical when it began at Hartford Stage, but it was enjoyable and the production qualities were stunning. The national tour is at the Bushnell from Tuesday, Jan 14 to Sunday, January 19. I’ve already seen Little Shop of Horrors twice in the last seven months but the production at the Connecticut Repertory Theatre in April should be special.  Why? UConn has a world class graduate program in puppetry, so I expect that Audrey II should be creative and spectacular.

In addition to the musicals, the next five months offer a wide variety of new plays and classics; comedies and dramas. It’s hard to choose which ones to make a special effort to see, but I will start with several that I’ve seen before and want to see again.

Lifespan of a Fact tells the story of an obsessive fact checker for a magazine and the writer who sometimes rearranges things to suit the narrative arc. It was a fascinating Broadway and I’m sure TheaterWorks will do an excellent job when it opens on Thursday, Jan. 30.

Wednesday, February 5 previews begin for Long Wharf’s production of I Am My Own Wife which won the Tony and the Pulitzer Prize for drama in 2004. It’s a one person show about Charlotte van Mahlsdorf, a transgendered woman who survived both the Nazis and the Communist regimes in East Germany. It’s a tour de force for the actor playing the multiple roles.

Two classic plays return to Connecticut stages: Yale Rep is producing A Raisin in the Sun in March and Hartford Stage is presenting Eugene O’Neill’s only comedy, Ah, Wilderness in May, directed by the new Artistic Director Melia Bensussen. You can depend on excellent productions at these theaters.

Former Artistic Director Michael Wilson will return to Hartford as the director of the stage adaptation of The King’s Speech. The play opened in Chicago starring Harry Hadden-Paton as Prince Albert later King George V. Hadden-Paton was seen in Downton Abbey and played Henry Higgins in the most recent Broadway revival of My Fair Lady.

Translating novels to the stage can be tricky; after all, novels are longer and often have multiple subplots and numerous characters. Hartford Stage is undertaking the task with a production of Jane Eyre beginning Thursday, Feb. 13, while Ivoryton Playhouse presents a stage version of F. Scott Fitzgerald’s The Great Gatsby in April.

Long Wharf is giving us two plays about the Chinese-American experience. The Chinese Lady which begins in March is about a young Chinese girl who was part of P.T. Barnum’s side show, explaining Chinese culture to curious Americans. In May, The Great Leap is set in more modern times, telling the story of a Chinese-American teen basketball player, who goes to China to play an exhibition game. Both sound fascinating.

If these aren’t enough incentive to visit one of Connecticut’s professional theaters, rest assured that there even more offerings – musicals, comedies, drama – on the schedule.

This content is courtesy of Shore Publications and Zip06.com.