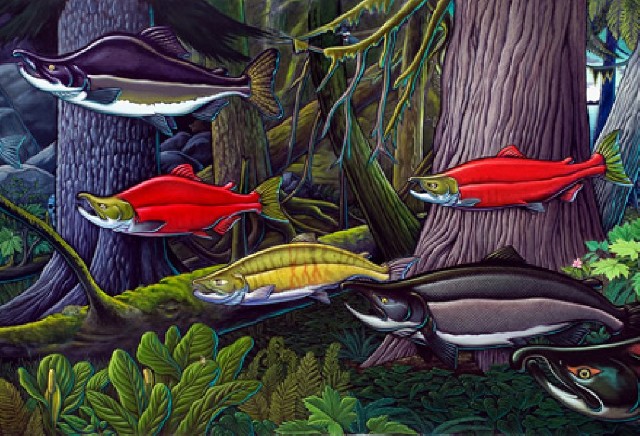 For audiences who follow PBS documentaries, the disturbing news from Pacific Northwest filmmaker Mark Titus comes as no surprise to find that America’s favorite fish, the wild Alaskan King salmon and other varieties of salmon are now in danger of becoming extinct. He begins his film with the intriguing film graphic warning: “There is a Fire in Water”.

Fishing  Alaska salmon  is a $ billion dollar plus industry that appears to be headed for a financial tsunami. Events, if left status quo, could have a negative impact on the future of salmon as a specie and thus become a huge tragedy for the world’s food supply if the uniformed public sits idly by while commercial business interests move, once more, into our last wild frontier.

First, it was Big Oil and pipelines, now it’s a looming ecological crisis concerning water and its management that threatens the diminishing wild king salmon population and their very ability to reproduce and remain a viable fish species. The ramifications of such an event happening are mind-boggling. We need to remember that all nature on planet earth is interconnected.

Documenting the issues and the steps leading toward the abyss for the Alaskan salmon industry, writer/director Titus, along with authors Bruce Brown (“Mountain in the Clouds”), David James Duncan (“The River Why”), David R. Montgomery (“King of Fish: The Thousand Year Run of Salmon”), and famed artist Ray Troll contribute to the film’s narrative in a series of filmed interviews laying out the case and plight of the industry and its future for those of us “lower forty-eighters” who know next to nothing when it comes to the salmon as a commercial commodity. We only know that the end- product is a delicious-tasting entre from the kitchens of our favorite restaurants.

The wild King Salmon population – some as large as 100 pounds – returning to spawn has been rapidly declining. The damns the government and the mining interests built, plus fish farms erecting literal concrete barriers in order to protect their commercial salmon fish farms have contributed to the king salmon population’s decline. Current measures all work against the wild king salmon and its immutable, primal, need to spawn and perpetuate its species. The streams and rivers they must navigate from the ocean, in many cases, has been poisoned by mineral and metal run-off from commercial mines. Floating salmon carcasses fill the rivers and streams lending visual witness to lessons not learned when it comes to human stupidity, selective memory, and poor stewardship of the land and its resources.

“The Breach” is a beautiful breathtakingly photographed documentary film that has a great deal to say about how Alaska and the Pacific Northwest need to reassess how this vast land area and largest of our states responds when it comes to protecting its wealth of natural resources.

Following the screening there was a Q & A session with director Titus, producers: Susan LaSalle, Shane O’Connell and Chris Voss, a local Alaskan fisherman and past board member of The Bristol Bay Regional Seafood Development Association. I don’t know what the politicians of Alaska and the mining interests thought of the film, but the vibe and message from the audience was unanimous. Something needs to be done concerning the saving of Alaska’s wild King Salmon. There is indeed, a fire in water.