The First Step: Diary of a Sex Addict 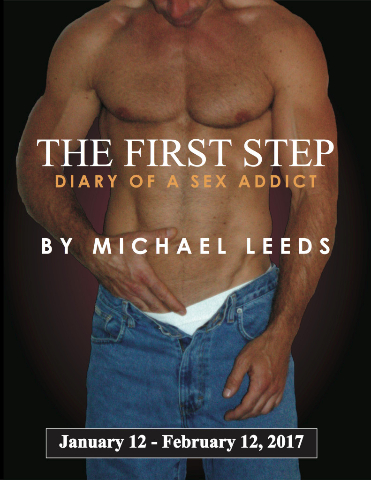 Sometimes, before you’re able to confront a problem, you must admit the problem exists.

It can be easier said than done.

That is what writer/director Michael Leeds conveys in his honest, funny, vivid and unapologetically shameless and bold play “The First Step: Diary of a Sex Addict.”

Leeds’ work is on-stage through Feb. 12 in a first-rate production by Wilton Manors’ Island City Stage.

The award-winning theater explores “all aspects of the LGBT experience --- accurately, creatively and compassionately.”

Joe, the main character in Leeds’ play, is a gay sex addict who frequents bathhouses, among other places.

But you don’t have to be gay to find resonance in this play about a compulsion ruling you so strongly you’re practically powerless to overcome it.

If you easily turn squeamish from graphic sexual situations and words, this play probably isn’t for you.

Indeed, if plays were rated as movies, this one would be rated triple X. There’s even material some may consider sacrilegious.

But if you’re willing to stomach the often-outrageous material, beneath the risqué content, there is plenty of pathos and insight into the mind of an addict.

The production’s pacing is so quick, it produces a dizzying, thrilling effect as you attempt to keep up with the action – sometimes without success.

This rapid pace deftly mirrors the impulsive, racing mind of an addict. Such a person’s urgent, almost insatiable need for gratification gets his mind speeding and eyes darting as though he were watching a world championship ping-pong match.

Those eyes are looking for someone, anyone to satiate their uncontrollable desire.

The multi-award-winning and nominated Leeds, whose work has appeared on Broadway, also directs the production of this 90-minute play without intermission. Under his guidance, the actors have found the comedy in the piece, as well as the drama. An upbeat, funny rap that Leeds has included in the play allows them to showcase their dancing and singing abilities.

All performers except Mike Westrich, as Joe the gay sex addict, play multiple characters, and seamlessly transition from one to another.

Westrich plays Joe without resorting to self-pity. He makes the character likable and humble, and infuses him with ironic humor, now that he can look back at the days when he suffered the  most (the story is often told in flashback). Because Westrich’s Joe is ingratiating, we’re eager to hear his story and root for him to defeat his issues. Westrich gives a multi-faceted performance, playing the character, when necessary, with palpable frustration and anger as easily as talking to the audience as though we’re his friends.

Those who’ve experienced uncontrollable urges or addictions may shed tears stemming from a complex reservoir of feelings such as relief that come with completing a multi-step program.

Leeds holds nothing back -- not just in his highly suggestive words and sights, but in demonstrating how an addiction can ruin one’s life and psyche.

Drumming up the strength to admit there’s a problem can be like facing a relentless boxer mercilessly unleashing jab after jab until you’re knocked out cold. Leeds compares sexual addiction to such a prizefighter, who appears as a character.

The play’s setting in terms of decade isn’t clear; “here/there/today” is stated in the program. Leeds flashes back to the past, showing the pleasures, frustrations and exasperation Joe and the other characters experienced, as he battled his addiction. We see relationships in his life deteriorate and Joe misses life events as the addiction begins to get the best of him.

Leeds writes vividly, so we get a clear picture of what the Joe is experiencing.

“It’s exhausting!” Joe exclaims about his constant urges. “I can’t turn it off! Half the time I don’t even know I’m doing it! It’s a constant drone in the back of my mind.

“Being a sex addict is like being caught in the rapids at night. The water’s roaring in your ears.

“You’re drenched, shivering, scared. You’re on dry land but the river’s right behind you. You can fall back anytime. You’re afraid to move. And then you see the faintest light in the distance. But you have no idea how to get there.”

Leeds accompanies such vivid writing with Joe’s inner voice, heard as though emanating from a distance. Westrich’s facial expressions appropriately complement those words. They belittle and overwhelm him, trying to knock him out mentally, just as the “boxer” that is Joe’saddiction does so physically.

As a boy, his father played in a sexual manner with his son. How much of a role did that play in the development of Joe’s addiction? Leeds asks us to consider without offering an easy answer.

It all sounds like deep, depressing drama, but Leeds leavens the serious material with outrageous humor that makes the material not just bearable but often entertaining.

In a love letter to musical theater, Leeds has participants in the sexaholic anonymous meeting singing songs about their situation to the tune of numbers from popular musicals (“I could have danced all night” from “My Fair Lady” here becomes “I could have sex all night…and still have begged for more.”)

Leeds’ play could use some work; some jokes are corny and Joe’s sexual activities are discussed in a bit too much detail in certain scenes.

Scenic designer Michael McClain has complied with the playwright’s request for a minimalist set, suggesting no particular location. The set helps emphasize the universality of addiction.

Joe narrates parts of the play from his memory, so dim lighting works in that capacity as well.

Landhuis uses a variety of hues, some of which do a better of setting mood than others.

David Hart’s sound design includes the use of a clock that makes a “time is of the essence” tick-tock noise, reinforcing Joe’s urgency to satisfy his urges within seconds.

As a character notes at the end, this eye-opening, awareness-raising play is only about “The  First Step” in combating Joe’s sexual addiction.

In just 90 minutes, Leeds demonstrates how much of a struggle that process can be.