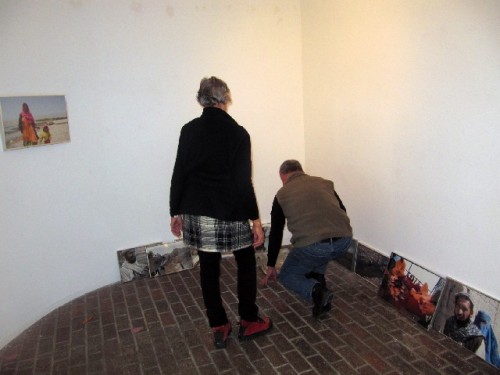 Sorting through the works to be hung. 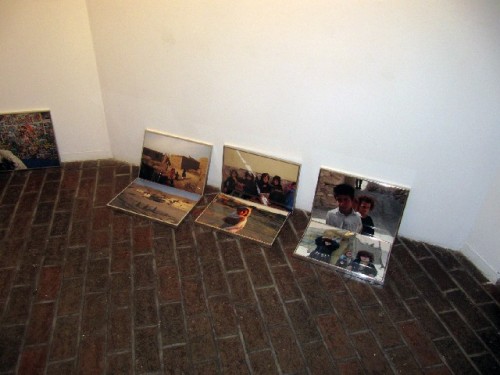 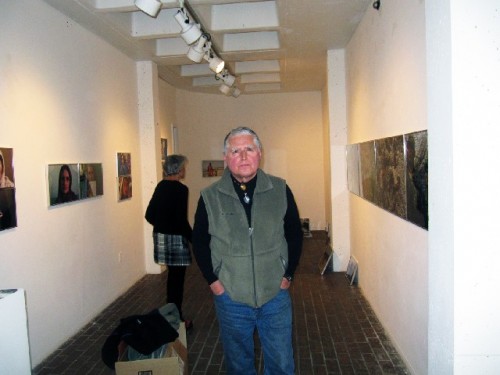 Jonas in the gallery during installation. 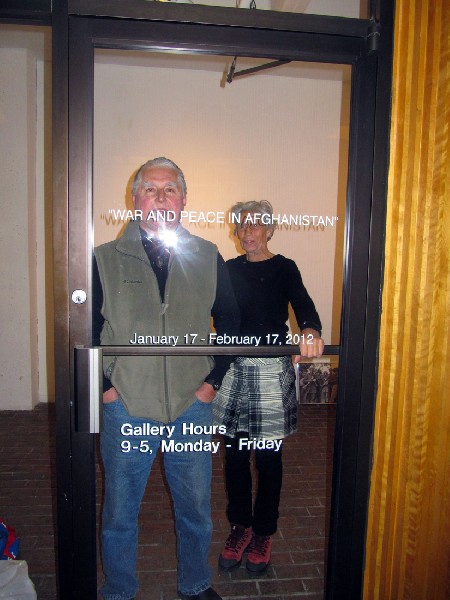 Jonas and Beingna behind the glass door of the gallery. 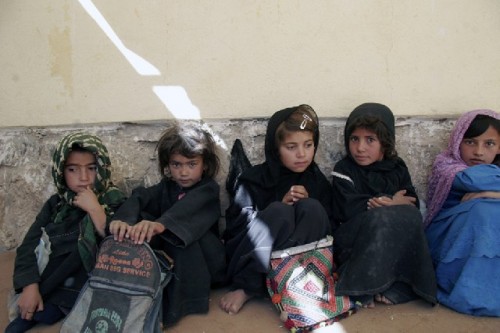 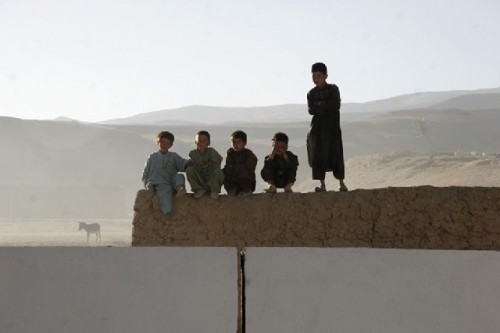 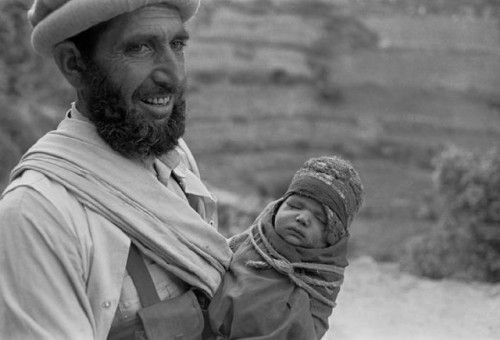 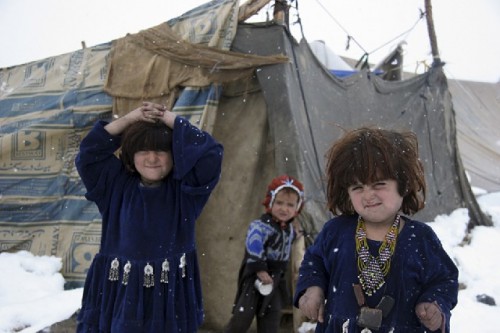 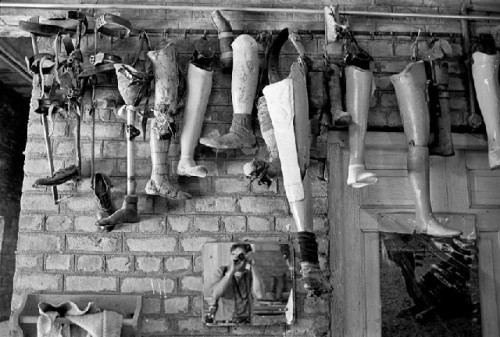 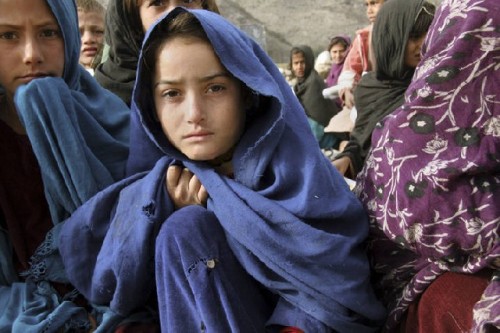 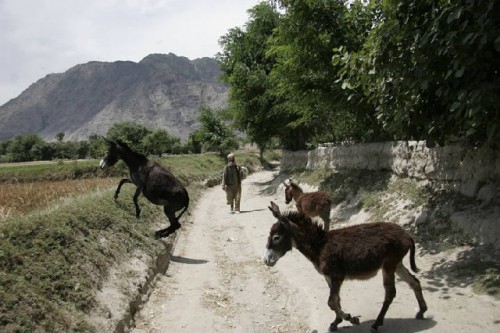 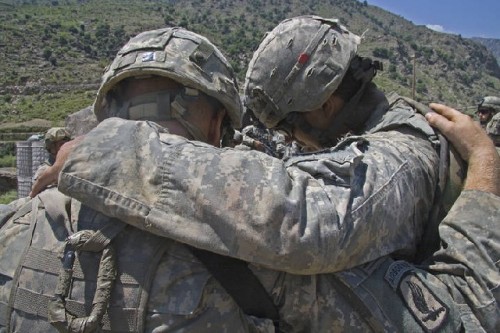 Between 1985 and 2010 the Berkshire based photographer Jonas Dovydenas made 13 trips to Afghanistan  to create an edited portfolio of some 12,000 images. They started with black and white film and in more recent visits he shot color digital images.

A selection of work has been densely hung, salon style, in the Koussevitzky Art Gallery at Berkshire Community College (BCC) in Pittsfield where they will remain on view, Monday through Friday, 9AM to 5PM through February 17.

We spoke with the artist yesterday while he and the curator, Benigna Chilla, a now retired fine arts professor at BCC, were installing the exhibition.

The works were grouped at the base of the walls and some had already been hung. It is the familiar process of sorting through and grouping works by subject, theme, and color.

On one wall I was struck by an edge to edge panorama of several disparate images that melded into a sweeping visual experience. There was a commonality of color and dappled light that evoked those vast, late impressionist vistas of Monet’s lily pond at Giverny.

But here the mottled light was cast not benignly on a sweeping landscape but melded with the camouflage field uniforms of  hunkered down American soldiers. With a bit of discordant local color one segment included a goat.

The natural impulse is to regard the work as beautiful. Which it certainly is with its rich color and cannily cropped compositions. It adheres to all of the notions of superb fine arts photography. But with the discomforting edge that they offer glimpses of a fundamentalist Muslim nation which has seemingly been a continuous war zone since Alexander the Great opted to march around and not deal with the resilient mountain warriors.

There have been continual combatants down through the centuries that have not seen the wisdom of Alexander’s end around tactic. Russia pulled out of a conflict without resolution followed by the United States. It ironically recalls how the French withdrew from an endless war in Indochina luring us into the tragedy of our war in Vietnam.

Although, through what I know of him, Dovydenas is a man of strongly conservative political conviction there is no such propaganda on view in that small, densely packed room of evocative images. He seems to be able to separate the polarities of art and politics in spite of the highly charged subject matter.

Emphatically, he insists that he is not a war photographer or journalist. There are none of the gruesome combat images that one might anticipate. Two stacked images with details of an operation in progress suggest the blood letting. Another is one of his early, black and white studies of a series of prosthesis limbs displayed in front of the wall of a shop.

In this body of work war and its devastating human impact are viewed obliquely. There is no impulse to exploit or sensationalize the subject matter. We see images of people and troops going about their daily routines. He has attempted to look into the hearts and minds of those who live under the cloud of war.

While I expressed admiration of the doppled panorama Benigna was insistent that I give equal time to the series on the opposite wall that displayed the faces of girls. This led into a dialogue about her efforts to sustain the gallery program even though she has retired from the college. Such a small space might easily disappear and become a closet for art supplies.

Benigna discussed efforts to send out PR to the media. One is often hopeful but, particularly for a small college gallery, there is a slim prospect for reviews. There is a lot of effort put into getting at best a press release posted here and there.

Which emphasizes all the more such efforts and their enormous importance. Particularly here in the Berkshires there are so few such venues.

One would like to think that students and faculty, the captive audience as it were, will wander in and spend time looking at the images. In such a dense, claustrophobic setting it becomes more like a magazine than an exhibition. There is no breathing room or chance to step back from the work. Instead we are drawn up close, inches from the images, and deeply into the work. It is, in that regard, a perfect setting for an intimate exhibition of photographs.

Benigna asked Jonas about the labels. He opted not to have them preferring that visitors just look at the images and make up their own mind about what they mean. Pressing, Benigna wanted to know if there would be an artist’s statement. He’s ok with that.

As artists often are Jonas is guarded about discussing the work with a critic. He has his own ideas of what it is about and there is a concern about misunderstanding. Particularly given the war zone content it is all too likely for the liberal media to get it all wrong.

We met Jonas and his artist wife Betsy some years ago when they hosted a reception for the International Club. On that occasion I learned that he was a serious photographer who has published several books. Each, as he commented yesterday, had taken several years to complete.  He hopes that the Afghanistan images will result in a book of 500 images and possibly another focused entirely on the American military.

The first time that Astrid and I viewed the work we sat at a table and Jonas showed us a stack of prints. That was several years ago and he has shot and edited a lot since then. Last year he flew in for lunch. He had forgotten a mockup book he had created and wanted to show me. In a great adventure we flew back to Pittsfield in his two seater then returned  to North Adams for lunch. Remarkably, Jonas built the two seater plane.

This richly satisfying exhibition at BCC is the first time I have seen the project on walls. We will be eager to return and see it when it is hung.

Separately, Jonas and I are snailing through an e mail dialogue about the project. I hope to get it posted soon as the show is only up for a month. Which seems like such a brief increment of time to view a project that has spanned many years.

What follows is the press release for the exhibition.

“War and Peace in Afghanistan” an exhibit by Jonas Dovydenas, will be on display in the Koussevitzky Art Gallery at Berkshire Community College (BCC) in Pittsfield from Tuesday, January 17 through Friday, February 17.

Dovydenas states “I hope my images  reflect a great respect for the American soldier, without whose presence peace in Afghanistan would be impossible. The black and white images are scans of film negatives from my trips in 1985, 1989 and the first two trips in 2004. The color images were taken with a digital camera. All the images are printed by inkjet on plain paper. These photographs were taken during three trips in 1985 and 1989 and during five more in the last two years. My purpose is to show, not tell, what is positive and good in Afghanistan. The love of freedom, the devotion to family, village life, the familiar human expression of the Afghan people – these are my subjects.”

It has been more than twenty years since Jonas Dovydenas took on the mission of photographing the endless war in Afghanistan. He lived with the Mujahideen in the mountains, was embedded with the American soldiers in their firebases, and went out on their missions. He also traveled to the villages and cities in ruins. But it’s not military adventures that are in his pictures – its adventures on the human soul in a military situation. Dovydenas not only looks at the soldiers, but by predisposition and somewhat surprisingly, he examines his own self.

Dovydenas will discuss the exhibit “Documentary Photography”: What does it mean?” Wednesday, February 8, at 1:00 PM in K-116 on BCC’s main campus. Forum credit is available for BCC students attending this discussion.