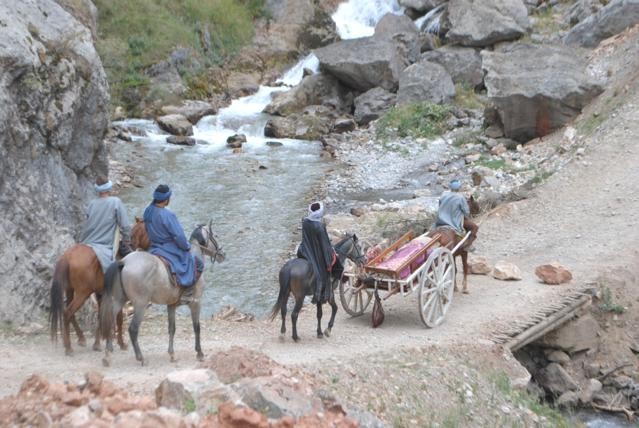 “Kurmanjan Datka Queen of the Mountains”, is a first in many categories for the emerging and fledgling movie industry of Kyrgzstan, in Central Asia. It took the vision of former Kyrgzstan politician Sadyk Sher-Niyaz, who harbored the desire from boyhood to become a motion picture director to take the plunge; leaving behind a successful career in Kyrgzstan political life, and strike out to become a film director.

Following a two-year post graduate course in screenwriting and directing in Moscow, Sher-Niyaz returned to his native Kyrgzstan, and founded the film production company Aitysh Film in 2006. For his debut as a director he chose to film the epic story of his country’s most iconic citizen, Kurmanjan Datka. She is a young village woman who rose from a tribal village to become the leader of her country during the middle 1800’s just as Imperial Russia was expanding its influence into central Asia and beyond.

His filmmaking colleagues were skeptical that such an epic film could made by any in-country production company. The story would be too sweeping and difficult to recreate on film; especially with the proposed limited budget of only $1.5 million available to capture the scope of the project. Undaunted by naysayers, Sher-Niyaz forged ahead shooting his historical movie over a two-year period requiring a seven month shooting schedule, with the majority of the filming taking place in the Kyrgzstan mountains during all type of weather conditions.

The result of efforts by almost 10,000 volunteers as extras and dozens of technical crews made the film the largest budgeted film that Kyrgzstan has produced. There are more than 50 speaking roles. The pay-off is a gorgeously photographed movie with pristine locations and settings with the sweep, style and excitement of Sher-Niyaz’s favorite director the great David Lean.

The story of Kurmanjan Datka is portrayed by four actors divided into four time frames. A young (5 year-old) who mystics and prophets predicted would become a great leader of her country. In the next section we follow the beautiful 23 year-old Elina Abai Kyzy who portrays the Kurmanjan becoming Datka or General or Leader of her country, the first woman in Asia to become a leader of a country. She lived to be 96 years-old.

The casting process, according to Sher-Niyaz “… involved more than 500 male actors for the speaking roles and 200 professional female actresses for the major roles covering the events in the Kurmanjan Datka’s life.” In the case of Elina Abai Kykz, the stunning-looking, raven-haired, statuesque beauty (almost six foot tall) this is her seventh film. The camera loves her and when she sits astride a horse and rides she cuts quite a striking eye-capturing figure, indeed. The action scenes involving her, soldiers, and battles scenes make for sharp and exciting camera work. I ask through the translator her if she is studying English to further her career. “That’s one of the first things I’m going to do when I get back home”, she replied. Not only is she beautiful and can act, she has a lovely modulated voice that sounds like golden honey when speaking. She definitely has a future in world cinema if she chooses to continue with her acting career. She has a new film project coming out in March of this year. I just hope she doesn’t abandon those English lessons in the meantime.

When I asked director Sher-Niyaz what is next on his schedule, he says “I’m thinking of making the Kurmanjan saga into a trilogy. There are so many facets to the Kumanjan Datka story, and each facet is a film story waiting to be told.” The Kyrgzstan film industry and the film“Kurmanjan Datka”, is an auspicious beginning on both accounts.