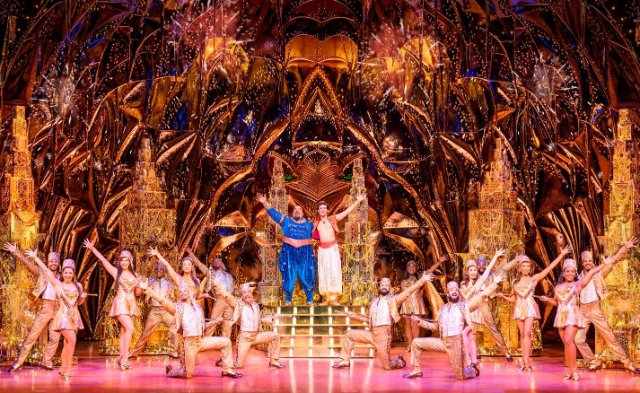 Photo by Deen van Meer The Genie (Korie Lee Blossey and the titular character (Jonah Ho'Okano) perform the showstopping number "Friend Like Me." 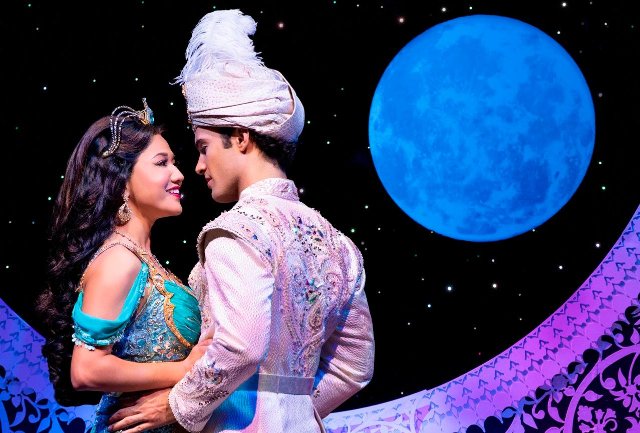 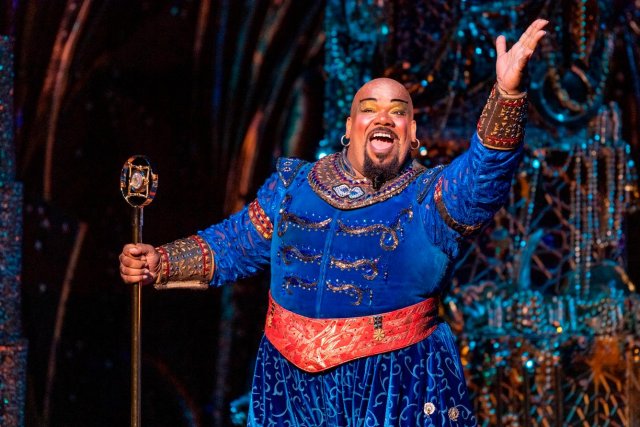 Photo by Deen van Meer The Genie (Korie Lee Blossey) performs in a scene from an equity national touring production of Aladdin.

The musical Aladdin might transport us to a “whole new world,” but the show also presents a familiar one to modern-day audiences.  Certainly, MeToo advocates applaud loudly when Princess Jasmine proclaims, “I am not a prize to be won! I will not be auctioned off to some self-centered show-off.”

And in a vibrant equity, national touring production currently playing the Broward Center for the Performing Arts in Ft. Lauderdale, Kaena Kekoa says the line with conviction. “You go girl!,” you want to shout.

The actress’s assertiveness as the independent-minded, forward-thinking princess fits right in with the zeitgeist of the times. Specifically, we’re living during an age in which women are asserting their rights. And many folks likely gasp at pre-arranged marriage the way they’d feel repulsed at a dirt-caked rat scampering across their brand-new tile.

Speaking of rodents, this familiar tale of an Arabian commoner whom others call a “street rat” continues to offer spectacular spectacle and jaw-dropping magic. For instance, in this Casey Nicholaw-helmed, strong national touring production, the sparkling costumes stand out. Similarly, our eyes widen at the magical transformations and sudden appearances of characters, as if out of thin air.

The secret to the illusions remains invisible. This is especially true when the titular character and Jasmine ascend into a starry night sky, complete with a full moon. It’s as though the “magic carpet” on which they’re riding is an airplane. The scene is breathtakingly beautiful. So, too, is the cave scene. It is filled with so much glittering gold, 1848 California Gold Rush miners would have salivated.

Add to the aforementioned visuals stately, regal structures within the Sultan’s palace, sword dancing, cartwheels, feather-adorned hats, firecracker-like effects, and a yellowish backdrop that suggests a sunset. These all add up to a visual extravaganza that should continue to please audiences of all ages.

But some musicals, including Disney shows, tend to feature most or all spectacle and little to no substance. These theatrical pieces are more like visits to theme parks than musicals featuring relatable characters and themes to ponder. Sure, Aladdin is spectacle and special effects heavy. Chances are, it pleases the kiddies. However, this 2011 Broadway musical should also appeal to and move adults.

For example, many might cringe when the Genie, often played by black performers, notes that he’s a slave to his lamp. Hearing this fact might be particularly hard for some, with the idea of slave reparations in the news. Needless to say, it's easy to cheer when the titular character frees the Genie.

Surely, any actor playing this magical person deserves a nice rest following a performance. This is one demanding role. The Genie (a terrific Korie Lee Blossey, blessed with a booming, yet pleasant voice) sports a seemingly heavy costume. Yet, he must dance, move and sing with energy for extended periods. This is especially true for the show-stopping, vivacious number, “Friend Like Me.” It appears to last for several minutes. Moreover, Blossey, who carries a heavy frame, appeared tired at the end. Beads of sweat glistened on his forehead throughout the number and beyond. Nevertheless, Blossey imbues the Genie with natural charisma, unbridled enthusiasm, charm and joy. The actor’s radiance and high-wattage smile should brighten moods.

Similarly, an actor playing the title character must possess enough stamina to quickly perform daring moves while exercising enough care not to hurt himself. Jonah Ho’Okano proves up to the task. He climbs atop a wagon. And from there, he jumps to another moving one. He also jumps off a tall structure and darts from place to place like a, well, rat.

The nimble Ho’Okano also injects determination and confidence into Aladdin. The actor makes us keenly sense the character’s strong desire to better himself.

Ho’Okano offers a multi-faceted portrayal. His Aladdin is wry with the Genie as well as charming and tender with Jasmine. By the way, the pair share a convincingly close, romantic chemistry.  Ho’Okano and Kekoa, as the princess, perform an intimate, touching, “A Whole New World.” It is arguably the most well-known song in this show. And that starry night sky, complete with a full moon,  adds to the romantic aura. Indeed, the two seem to float in the sky on that magical carpet.

Meanwhile, the evil Jafar proves a formidable rival to the titular character. Jonathan Weir, decked out fittingly in a black robe, gives us a cunning, sly character with an evil laugh and a thunderous, shiver-inducing voice. There’s a touch of comicality to Weir’s villain. Still, his Jafar is mostly dark and menacing.

Speaking of humor, understudy Michael Bullard, who performed on the night of the reviewed performance, plays Jafar’s villainous sidekick, the aptly-named Iago, with a clownish demeanor. Of course, this Iago is unlike Shakespeare’s. He’s not nearly as evil and crafty, but more of a buffoon (think Beauty and the Beast’s Lefou).

Musical theater buffs should enjoy references to shows such as the aforementioned one. Further, Aladdin’s fourth-wall shattering device and self-awareness are amusing.

But Aladdin falls short in character development. None of the characters feel like three-dimensional people. For instance, we know little about Aladdin’s backstory, other than the fact that he lost a mother. And we learn nothing about her and not a whole lot about Jasmine. At least the musical, unlike the animated 1992 Disney film, includes a touching ballad, “Proud of Your Boy." It fleshes out Aladdin just a bit. Through the song, Aladdin earnestly communicates his wish to please his mother, even though she’s deceased.

Not all of the songs are memorable. Many would argue that the showstopper is “Friend Like Me,” but equally deserving of that honor is “Prince Ali.” The latter, unlike the former, features a catchy melody that sticks in your head. It carries an appropriately royal, majestic flavor.

Meanwhile, the opening “Arabian Nights” contains a welcoming, lively melody. And a sense of wonder suffuses “A Whole New World.”

Wonder and astonishment are two likely reactions to this musical, which offers something for all ages.

This is true even if you’ve seen the musical many times.

This equity, national touring production of the stage musical adaptation of Aladdin is heading north. To see if it will come to your city, or one nearby, visit https://www.aladdinthemusical.com/tour. There, you can find ticket and venue information.