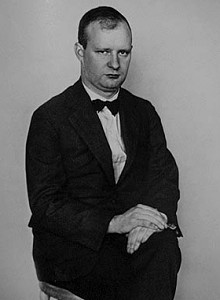 Rarely staged in the United States since its premiere at Santa Fe in 1967, the opera is an unsettling and violent treatment of the dark side of artistic genius. Cardillac is based on a short story by E.T.A. Hoffmann about a goldsmith who loves his creations jealously and above all else. Unable to be parted from his treasures, and unable to bear their ownership by another, he murders the purchasers to be reunited with his art. A rarely-performed highlight of the baritone repertoire, the title role is a long-held dream for beloved baritone Sanford Sylvan. Sylvan built his career in Boston, and enjoyed many musical triumphs. Cardillac will be conducted by Gil Rose; it marks Rose’s first time on Opera Boston’s podium since being named Opera Boston’s Artistic Director in December 2010. Stage Director Nic Muni and scenic designer Erhard Rom make their company debuts with this production.

Cardillac  marks Opera Boston’s return to the European modern period; two of the company’s greatest critical and box-office successes have been Weill’s The Rise and Fall of the City of Mahagonny (1929-30) and Shostakovich’s The Nose (1927-28).

With this title role, baritone Sanford Sylvan returns to Opera Boston for the first time in many seasons. His previous appearance with Opera Boston was as Pangloss in Candide in 2003. He is recognized for the ability to display a remarkable range of vocal expression and communicative power. In the opera world he is recognized as a versatile talent; he was a part of Peter Sellars’ legendary Mozart productions, singing the title role in Le Nozze di Figaro and Don Alfonso in Così fan tutte. He has also thrived in contemporary music, collaborating extensively with John Adams, taking lead roles in Adams’ operas and vocal works: Chou En-Lai in Nixon in China, the title character in The Death of Klinghoffer, the Narrator in A Flowering Tree, and the baritone soloist in The Wound Dresser. He served as the director of the opera program at Boston Conservatory from 2005-2007 and is currently on the faculty of the McGill University’s Schulich School of Music in Montreal.

Soprano Sol Kim Bentley, a longtime featured member of Opera Boston’s ensemble, was most recently a memorable Roll Seller in 2009’s The Nose. Cardillac marks her principal role debut as Cardillac’s Daughter, who cannot compete with her father’s golden creations for his love. Bentley’s other regional appearances include the title role in Tosca with Longwood Opera, Polly in The Threepenny Opera with Commonwealth Opera, and Rosalinda in Die Fledermaus with Connecticut Lyric Opera. Bentley is active in Opera Boston’s education program, performing in The Telephone and Little Red Riding Hood across the Boston area.

Soprano Janna Baty makes her Opera Boston mainstage debut as The Lady. Baty’s previous appearance with Opera Boston was as the Duchess in 2003’s regional premiere of Adés’ Powder her Face, as part of the inaugural Opera Unlimited festival. Recent highlights include creating the role of impresario Laura Keene in the world premiere performances of Eric Sawyer’s Our American Cousin, and appearing as Hermione in the first complete concert performance of John Harbison’s Winter’s Tale with the Boston Modern Orchestra Project. She serves on the voice faculty of the Yale School of Music.

Tenor Steven Sanders returns to Opera Boston as The Officer, The Daughter’s suitor. Sanders’ previous appearance with Opera Boston was in Lucrezia Borgia (2006). Since then, he has appeared around the country in a wide range of repertory, distinguishing himself in twentieth-century and contemporary repertoire such as Nixon in China, The Rape of Lucretia, Dead Man Walking, Galileo Galilei, and the Grammy-nominated recording of Musto’s Volpone, which he performed at Wolf Trap Opera.

Nic Muni makes his company debut as stage director; his most recent project in Boston was Carmen for Boston Lyric Opera in 2009. As a freelance stage director, Nic Muni has directed over two hundred productions with companies in North America, Europe, and Australia. Highlights include two acclaimed collaborations between Houston Grand Opera and Seattle Opera: Il Trovatore—which has been seen in Seattle, Houston, Tulsa, Melbourne, Vancouver, the Canadian Opera Company in Toronto and at the San Francisco Opera—and Norma, which has been presented in Seattle, Houston, Cincinnati and Los Angeles. Additional work with Houston Grand Opera includes the world premiere of Jackie O, an opera based on the life of Jacqueline Kennedy Onassis. Muni recently staged the North American premiere of Wagner’s Das Liebesverbot at Glimmerglass Opera.

Erhard Rom makes his Opera Boston debut as scenic designer. Upcoming projects include the Canadian premiere of Nixon in China for the Canadian Opera Company in February 2011. Rom’s work has frequently been seen at Boston Lyric Opera: scenic design credits include Rusalka, La Bohème, L’italiana in Algeri, Resurrection, and “Carmen on the Common.”

Costume designer Gabriel Berry returns to Opera Boston for the first time since 2007’s Ainadamar. Berry’s most recent work in Boston was a collaboration with Mr. Muni on 2009’s Carmen for Boston Lyric Opera. She also has extensive credits with the American Repertory Theater, designing costumes for Henry IV, Parts 1 and 2, Henry V, The Tempest, and The Threepenny Opera.

Lighting Designer Christopher Ostrom’s career at Opera Boston spans 14 seasons and over 36 productions, most recently Fidelio in 2010. Ostrom has many credits at Chautauqua Opera (Stiffelio, Gianni Schicchi, and more), and at theatre and opera productions around Boston and New England.