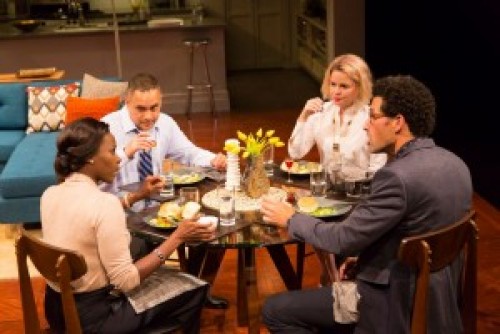 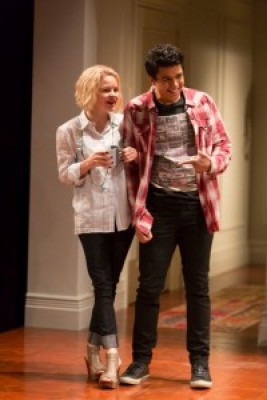 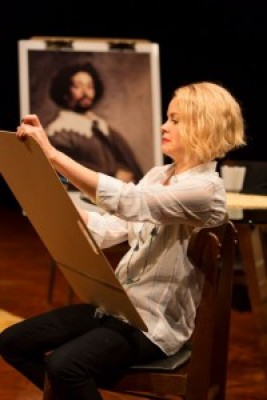 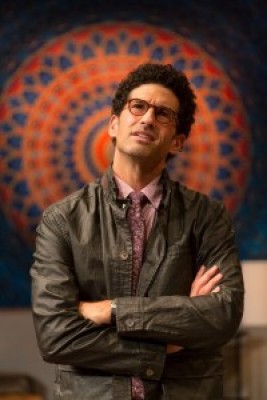 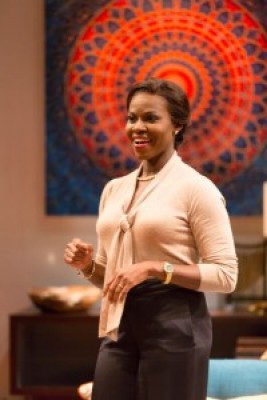 Directed by Gordon Edelstein
Performed at the BU Theatre
The Huntington Theatre Company
January 8 through February 7, 2016
The play is performed in one ninety minute act.

The drama is focused on the trials and tribulations of Amir (Rajesh Bose). He represents the complexities and issues of being a formerly devout Muslim in contemporary Western culture. He is a New York City mergers and acquisitions attorney, and considers himself an apostate.

To lessen prejudice in his legal world, Amir has changed his name so that he can “pass” as Indian rather than Pakistani. One of his bosses actually gave him a Krishna statue. He is married to the very white-bread Waspy wife Emily (Nicole Lowrence), an artist.

A 17th Century painting by Velasquez is the play’s metaphorical image. It is a painting of Juan de Pareja, a “Morisco” or Moor. In this case, he is a person of mixed heritage who was a Muslim convert to Catholicism that was born into slavery.

Possessing a wonderful inner and exterior intensity, the subject of the painting expresses multiple degrees of personality, inner awareness a well as dignity while representing “the other“ or the alien in society. By the way, serving as Velasquez’s studio assistant, de Pareja was eventually freed by the master artist.

This painting inspires the serious and somewhat clueless Emily who is fascinated by the traditions and spirituality of Islamic art. After a racist comment to Amir in a restaurant, she decides to paint a portrait of her husband inspired by the Velasquez portrait.

Amir is personally uneasy about her motivations and the implications of Velasquez’s painting. With the urging of his wife and nephew Abe (Mohil Gautman), reluctantly Amir visited a shady Imam who had been arrested for collecting funds that he just might be distributing to Islamic terrorist organizations. Though Amir wanted no part in the holy man’s defense, he was quoted in the New York Times, and his law firm was mentioned suggesting a role in the Imam defense.

Striving to be made a partner of his law firm, Amir feared that this publicity will lead to his disgrace, being labeled a Muslim, and in turn suggests the possibility of being a terrorist sympathizer. He felt that his law career would be jeopardized.

The narrative arc of Disgraced is set at the dinner that Amir and Emily host for their guests, Isaac (Benim Foster) and Jory (played with great dignity and presence by Shirine Babb). Isaac is an art curator at the Whitney Museum. He is Jewish. Jory is his wife and a legal colleague of Amir. She is African-American.

The evening begins with polite conversation but soon escalates into heated discussions on racism, aspects of the Islamic faith, Western versus Eastern Culture and the personal baggage that underscores inability to escape heritage and upbringing.

Like clashing waves on a calm shore, the play tries to frame a picture of competing deep felt faiths and ideas. This troubling yet compelling co-mingling of perceived real prejudice underscores the actual conflict presented in the play. Thrown in is a bit of sexual misbehavior as well. How do real people act and even adjust to their human needs and base desires as well as to real or perceived fears and personal failings?

Seemingly contrived and less than subtle, but somehow working is this perfect storm of racial, cultural and religious conflict set in an Upper East Side apartment. Being educated, well-to-do and seemingly well grounded is certainly not what it appears to be. Human foibles and faults supersede living comfortably. Cultural heritage and prejudice exacerbate everything.

Poor Amir is a truly conflicted soul. He can’t go home to his roots, but he certainly cannot totally disengage from his upbringing and heritage. Bose puts on a wonderful, emotive characterization. Somehow expected, his downfall is quite sad. But was it necessary?

All the actors are strong. Each does an empathetic or in contrast an unfeeling star turn. Amir is the magnetic center of the drama with each of the other characters reacting or repelling from him.

Gordon Edelstein’s direction and the set by Lee Savage are striking. But the denouement and the play’s resolution are somehow both expected and unsatisfactory. Except for the audience, there are really no winners in this play, only losers.