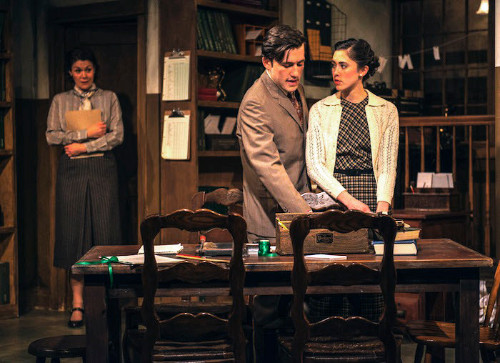 Griffin Theatre creates a perfect microcosm of the pre-feminist age in London Wall, the 1931 John Van Druten play about the personal lives and work culture in a London law firm. Robin Witt directs a smart, sprightly trip into the past that manages to shine a light on the present as well.

London Wall introduces the steno typists of Walker, Windermere & Co., a white-shoe firm, and the clerks and junior solicitor who keep it humming. We occasionally meet the serious Mr. Walker himself (Ed Dzialo), who seems to appear mainly to mete out discipline or make announcements.

The 2.5-hour play has two intermissions but the time doesn’t drag. The dialogue is brisk and funny and the acting excellent by all cast members. We meet Miss Janus (beautifully played by Vanessa Greenway), who has been at the firm for 10 years, while yearning for her fiancé, a Dutch diplomat, to commit to marrying her. You see, marriage was the only escape for low-paid female workers. The wages paid to the younger typists, such as Pat Milligan (Rochelle Therrien), a 19-year-old who has just started at the firm, are pitifully low—barely enough to live on with little left for small luxuries.

It’s not surprising that a steno typist might be attracted by a young solicitor’s invitation to dinner and theater and other treats. And so Pat is drawn into the web of the office Lothario, Mr. Brewer (Nick Freed as a sharply dressed operator), who lures her with luxuries. Also vying for her charms is Hec, an earnest young shipping clerk from downstairs. George Booker plays Hec with rumpled earnestness and gets help in his romantic quest from Miss Janus, who tries to protect Pat from the snares of Mr. Brewer.

Mr. Walker has good advice about mixing work and romance, which still holds true today. He tells Pat, “Outside the office, have as good a time as you like. But in the office, work. And when you’ve done your work, go home.” (When an office romance ends and the ex-lovers have to keep working together, the result is awkward at best.)

One of the key side plots involves a client, Miss Willesden (a delightful Mary Poole), who always has an action to file or an amendment to her will. She’s been to Walker, Windermere so often that the staff protects Mr. Walker from her requests to meet with his lordship.

Class distinctions abound in London Wall. There are the basic social and wage differentials. In addition, there’s the class distinction between lawyers and everyone was, which exists in large law firms today. The two–class structure is made up of attorneys, all of them the US equivalent of the House of Lords, and the entire support staff, no matter how experienced or well-educated, who make up the peon class. (The voice of experience speaks.)

Kendra Thulin’s work as dialect coach results in variations in vocal style among the typists, clerks and solicitors; young Hec has an appropriate working class accent.

John Van Druten, English-born playwright who later became a US citizen, is best known for plays like Bell, Book and Candle (1950), The Voice of the Turtle (1943) and I Am a Camera, which was adapted from Christopher Isherwood short stories and formed the basis for the musical Cabaret. London Wall has rarely been staged.