The Intouchables Screened at Palm Springs

Charming French Comedy is a Must See 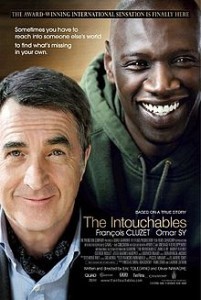 Co stars of The Intouchables. 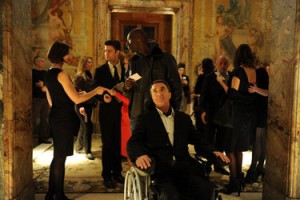 A charming must see French comedy.

This classy little comedy tale of Philippe, a super-rich quadriplegic (Francois Cluzet) and a young man, who goes by the name of Driss (Omar Sy) whom Philippe hires from the Parisian projects to become his caretaker, is funny, clever, poignant, and a delight, thanks mainly, to its two stars: Francois Cluzet and Omar Sy.  Co-directed and written by Eric Toledano and Olivier Nakache, the comedy with a message, works because of Cluzet’s decision to not play his character as an embittered wheelchair-bound man as a result of a paragliding accident.  Instead, his cheery outlook and zest for life’s adventures hasn’t diminished a wit.  He still likes life in the fast lane and its pleasures.  It’s just that those pleasures are now few and far between.

All that changes, however, when Philippe, on a whim hires Driss.   It’s Driss’ cheeky insouciance and off beat interview manner that convinces Philippe that Driss is the caretaker he wants to try for six months.  Never mind that Driss is a petty criminal and hasn’t a clue or the training required to be a caretaker to a quadriplegic.  Details like these have never been an obstacle in French comedies in the past, and they aren’t in this one either – but they do make for some very funny moments throughout the film.

Yvonne the personal advisor to Philippe is wonderfully played by Anne Le Ny.  Yvonne has a long-time understanding of Philippe’s high expectations, and especially his love for the “rush” of adventure, and waits to see just how long this young confidence man from the projects will last.  Driss also, would like the temp arrangement to last.  He has an ailing mother, and several siblings to support.  Besides, he has eyes for the sexy Magalie (alluringly played by Audrey Fleuret), who also works for Philippe.

All of the supporting characters are solid, as well, in this wildly imaginative and clever script, and the action scenes are “white knuckles” all the way.  Alas, “The Intouchables” didn’t make the short list of the Academy’s Best Foreign Language Film hopefuls.  But that shouldn’t disqualify a very entertaining and gorgeously photographed and cleverly directed film from being on one’s list of must see films this year.

Reposted by permission of Jack Lyons and Desert Local News.