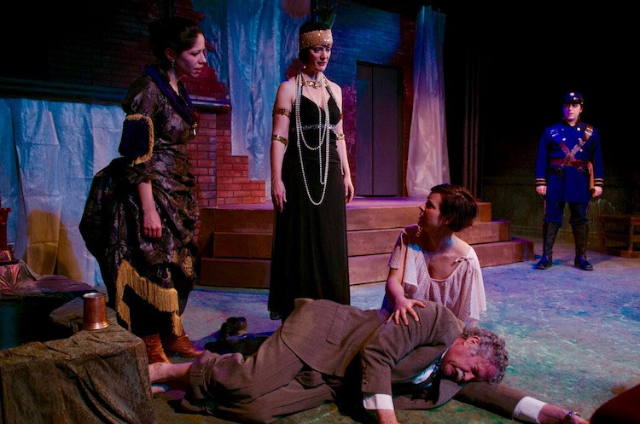 Sarah Ruhl’s sweet, quirky Eurydice retells the myth of Orpheus and Eurydice, but focuses on the bride rather than on the bereft groom. It’s a story of memory and regret, of lives loved and lost.

Promethean Theatre Ensemble’s new production of Eurydice, directed by Nicole Hand, is staged in modern dress with a chorus made up of three Stones: Big Stone, Little Stone and Loud Stone (Susie Griffith, Meghan Tabor and Brendan Hutt). The Stones guard the Land of the Dead and intone the rules of that land: Being sad is not allowed. Dead people can’t sing. Fathers are not allowed.

We meet Orpheus (Jordan Golding) and Eurydice (Janeane Bowlware) as sweethearts on the beach. Orpheus, in mythology a troubadour, composes a song for Eurydice on his guitar. “Orpheus never liked words,” Eurydice says. “He had his music. He would get a funny look on his face and I would say what are you thinking about and he would always be thinking about music.”

The two are married and as they celebrate their wedding, Eurydice meets the Nasty Man (Jared Dennis), who lures her to his apartment in a tall building with the promise that he has a letter from her dead father (Sandy Elias). They climb 600 stairs to reach his home but she soon becomes suspicious that he has ulterior motives. (In mythology, Eurydice is pursued by Aristaeus, a son of Apollo.)

Trying to escape from the Nasty Man and return to her husband, Eurydice stumbles and falls down the long flight of stairs. She ends up on the elevator down to the Land of the Dead where she finds that everything she knew about words and symbols had vanished. She meets her father but has to relearn his language and the story of their lives. Language is topsy turvy in the Land of the Dead.

And there’s always the threat by the Stones that you will be dipped in the river to clear your memory. Forget. Forget. Forget. The menacing Lord of the Underworld is a large child on a red tricycle (played by Jared Dennis), who returns to threaten Eurydice.

Meanwhile, Orpheus is desperately trying to find his bride, writing music for her and sending her letters via a worm. He holds an old-fashioned dial telephone and tries to get a telephone information operator to locate her. “Eurydice. E-U-R-Y – that’s right. There’s no last name. No, I don’t know the country … or the city.”

Eventually Orpheus is allowed to go to the Land of the Dead to rescue his wife, but only under certain circumstances. If you’ve read your mythology lately, or read or seen any of the many adaptations of the story of Orpheus and Eurydice, you know how it ends.

Eurydice is designed by Jeremiah Barr, and staged in the Athenaeum’s Studio One. Ethereal music, composed by Eric Backus, represents Orpheus’ music and is a fine sound backdrop for the story. Costume design is by Garry Nocco, whose gowns for Eurydice, Big and Little Stone are charming.

Director Hand manages the pace of the story well and the performances are generally fine, although Golding is a bit tentative as Orpheus in the early part of the show, in contrast to Bowlware’s ebullient performance as Eurydice. Elias is serious and solicitous as Father.

Eurydice by Promethean Theatre Ensemble runs 90 minutes with no intermission. It continues through February 11 at the Athenaeum Theatre, 2936 N. Southport. Tickets for performances Thursday-Sunday are $27.

Update: Chicago’s Lyric Opera just announced a new co-production of Orphée & Eurydice, composer Christoph Willibald Gluck’s most popular opera. The collaboration with the Joffrey Ballet and the LA Opera will be staged at the Civic Opera House beginning Sept. 23, 2017, and later in Los Angeles and Hamburg, Germany, with the Hamburg Ballet.