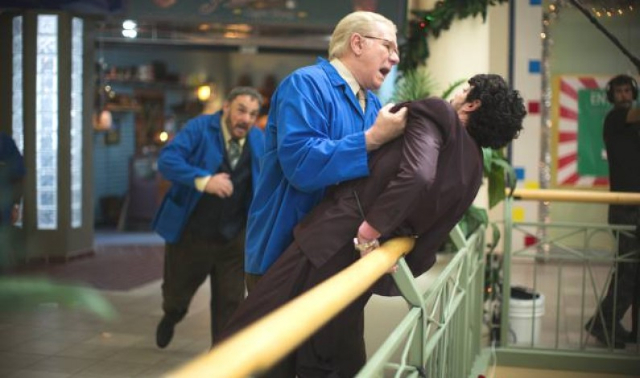 Now is the winter of our discontent… job wise that is.  And the problems of the American economy and the details of how to fix it aren’t getting any rosier if one either reads, listens to TV, radio, or lives in the world of the internet. Money scams are all around us, our politicians seem to be working for corporate America instead of for the people who elected them to “drain the swamp”. And the beat goes on…

Writer/director Scott Marshall Smith’s potent Indie movie “Camera Store”, is a cautionary tale about American business and its practices toward its employees.  Set in the 1994, on Christmas Eve, when Malls were in their ascendancy “Camera Store” becomes a microcosm and a harbinger of what the future holds for a great many small entrepreneurs and their employees and it isn’t pretty.

Just this week alone Macy, the iconic retail store announced the closing of more than 100 of its stores in 2017 laying off 10,000 employees. Other iconic retailers like Walmart, Sears, Target, JC Penney, Kmart, and Kohl’s have also pulled the plug on some of their stores, with the result being that nearly another 44,000 jobs will disappear in the retail sector of the American economy in 2017.

Smith’s passionate story of corporate betrayal to the American worker’s dream is explored through the metaphor of a local retail camera store, called Bibideaux’s Family Photographic, located inside a Mall on Christmas Eve.  Two of America’s finest character actors star as embittered employees and clerks: Ray LaPine, played by John Larroquette) and Pinky Stueben, played by (John Rhys-Davies). Ray who acts as the store manager and Pinky, a thirteen-year employee who likes the sauce are commiserating that hardly anyone one has been in the store to buy cameras or its accessories.  The employees have been waiting for their paychecks, back-pay, and/or a Christmas bonus.  Ray keeps telling them that their paychecks will here by the end of the shift. Strong language alert: The currency of film dialogue these days echo the vernacular of the streets.

The Mall manager keeps stopping by to ask Ray when the camera store will close.  Pinky haunts the bar opposite the store as a regular customer, and tonight he’s had a little too much to drink.  He prefers the Scurvy Parrot Pub, rather than the Italian restaurant two stores down owned by Tonia Canucci played by Laura Silverman, who serves as Ray’s ‘listener/therapist’ when he gets down in the dumps.  Paul Ben-Victor as Mr. Bibideaux, Cherryl Ladd as Alma, Justin Lieberman as Pete, the newly assigned assistant manager, Maddie McCormick as Penny Wednesday, offer solid support.

“Camera Store” is a talky, intimate movie with lots of philosophy, complaints, and hope being discussed about the character’s lives and plans.   Ray has had a dream of owning his own camera business for years.  But he fails to act on his desire to pursue the dream.  It’s actually safer and easier to just keep talking about it.

I had the opportunity to interview writer/director Smith.  His comments were most interesting regarding today’s economy and the future of the American Dream for middle-class Americans.

I asked where the idea for the movie came from?

He replied, “… it came from my experience of working at a camera store when putting myself through film school. The store was jam-packed with characters. They were some really funny people in that store.  I originally wrote the first draft as a comedy.  What seemed funny at first – the plight of my fellow employees endlessly carping about the jobs they took for granted – slowly merged into a tragedy.”

“The people I worked with were good, hard working employees – the backbone of the American middle class. They did as generations before them – worked hard and made their companies and their managers rich all under the promise of the American dream.  When those companies turned around and decimated that dream, it was no different at the corporate store than the camera store.”

“Like Ray and Pinky, those workers stood in numb disbelief, pink slips dangling from unfeeling fingers, betrayed by their own bosses, unemployed in late career, retirements sucked into offshore accounts. These [corporate] guys were exchanging high-fives and popping champagne corks after they were done.”

“People got comfortable with gutting people’s lives and saw [their] jobs as well done. People were literally [dumped] out onto the streets with nothing. ‘We can’t retire you, we can’t keep our promise.  There’s no gold watch, you’re pink slipped and you’re gone today’. The whole idea of their expectations for all their hard work and loyalty that went into it, and to end up with nothing, is disillusioning, devastating.”

What do you see as the future of the American dream? Can it survive?

He said, “It’s not going away – it’s increasing” adding, “I see exploited salesman like Ray and Pinky as modern-day successors to Arthur Miller’s tragic archetype salesman Willy Loman – loyal, dedicated employees who devote their working lives to a company, only to be cast aside with little or nothing when they’ve grown old and outlived their usefulness.“

Harsh words and a bleak outlook.  There’s a lot to ponder when watching “Camera Store”.  When it comes to a Cineplex near you near you, make sure you buy a ticket.  The film is being distributed by Provocator,LLC., for release in 2017.