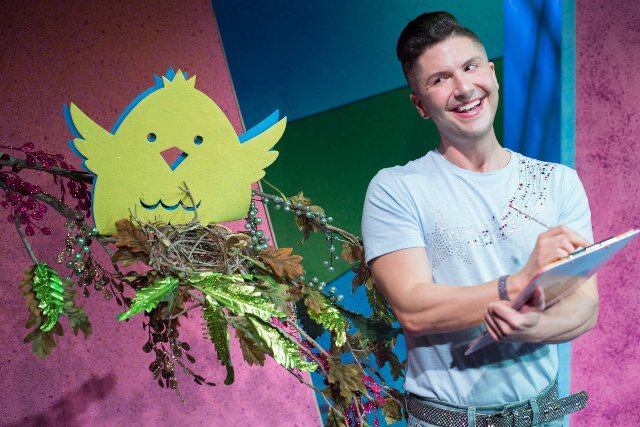 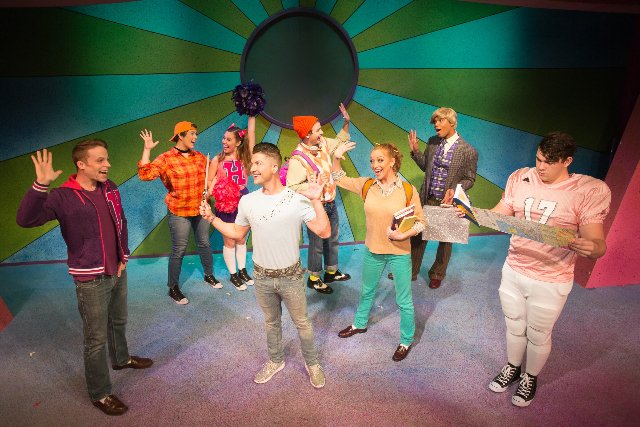 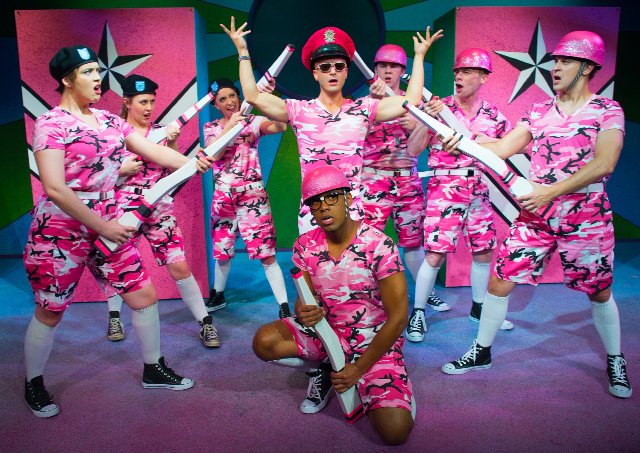 (Photo by George Wentzler) The cast of Zanna, Dont'! performs a number from the vibrant musical.

You’d have to be a fuddy-duddy or a complete cynic not to feel refreshed and uplifted after seeing the award-winning Off-Broadway hit musical, Zanna, Don’t!

This sweet and, well, loveable fairy tale possesses what most casual theatergoers are looking for in a show: An upbeat, escapist story, a simple, yet universal and timely message (in this case about the importance of loving one another), identifiable characters we care about and an infectious, vibrant score.

But in today’s society, when we’re not exactly singing medleys of “Kumbaya,” “One Love” and “Happy,” there is, in addition to Zanna’s sweetness, a biting quality to the show.

The target for this satiric tone? It certainly seems to be those perpetuating a hateful, close-minded atmosphere in the halls of government and streets that have become stages for violent protests.

Songs such as “Don’t Ask, Don’t Tell,” for example, seem to want to send a message to those making a big fuss out of homosexuals serving in the military.

Zanna Don’t! is set in an alternate, fairy tale America, “once upon a time.” It’s an America in which most of the world is homosexual. Heterosexuals are subject to “heterophobia.” That’s especially true in fictional Hartsville, the setting of the musical. It’s a small-town somewhere in the Midwest to western states populated by heterophobic folks. They’re the same type of people who, in today’s real America, some might construe as narrow-minded.

The musical spans most of a school year, and is set in and around the town’s school. The usual kind of high school “drama” prevails, complete with cheating love interests and broken hearts. Fortunately for these young folks, one of the students is a fairy named Zanna (a fantastic Conor Walton).

One might ask: Where is our 2018 version of Zanna when we need him most, which seems to be about right now? Wouldn’t it be wonderful, for instance, if he could flash his signature mood-brightening smile, use his wand to slice through the tension-filled air in Washington and at least make Democrats and Republicans compromise with each other (perhaps love each other is asking a tad too much). What if a real-life, 2018 Zanna could work his magic with the U.S. and North Korea? Or maybe, perhaps, the parties forever negotiating peace in the Middle East?

Well, we can dream. But thanks to the power of live, intimate theater, we can do more than that. We can escape reality for two hours, vividly envisioning a Zanna-type with magical powers who can right the world’s wrongs.

Zanna is a Peter Pan-like character; he’s able to speak to and understand his pet bird (certainly Tinker Bell comes to mind). But this magical individual with similarities to the boy who refuses to grow up isn’t entirely naïve. Neither is the show in which he appears, with a book, music and lyrics by Tim Acito, as well as additional book material and lyrics by Alexander Dinelaris.

Zanna, Don’t!, for all its seeming naivete, never pretends that creating a society in which love prevails is as easy as waving a magic wand. The whole concept of love isn’t a magical potion, but something that frustrates, troubles and creates conflict. Even Zanna runs into obstacles. Some of the roadblocks he faces threaten to make even the perpetually-happy, fairy, always ready to come to the rescue, miserable and vulnerable.

In short, Zanna, Don’t!  isn’t just another show with catchy songs and a “love conquers all” theme. It subverts norms, with its alternative universe. Who would have thought of a society in which a heterosexual couple find themselves as the minority, knowing they’re in a forbidden love relationship and must keep it a secret? Yes, gay theater has indeed come a long way from its early days, when AIDS and direct political messages dominated the genre in the 1980s and 90s.

The folks in Zanna are proudly and unapologetically gay and lesbian, tough and brimming with confidence and enthusiasm.

Those are apt adjectives to describe Conor Walton’s charismatic performance in the central role. His Zanna is flamboyant, effeminate and cheery. But underneath those qualities, there’s also a Peter Pan-like unabashed confidence and conviction about this Zanna. This is the case even when his character is soft, comforting and re-assuring to those who need him most.

Watching him, you’ll notice Walton’s Zanna can barely contain his enthusiasm. He shakes at one point, as though his seemingly uncontrolled zest for life is an electrical charge, providing him with the fuel that drives his positive, upbeat mindset.

Walton also excels at conveying Zanna’s vulnerability and frustration when heartbreak sets in. A similarly strong intensity takes over his eyes, voice and facial expressions. It’s just as present and convincing as when he’s serene, happy and Willy Wonka-like magical.

Walton possesses a strong, expressive singing voice, along with his castmates. They’re accompanied by a vibrant orchestra that at times makes it a bit hard to hear the often-playful lyrics. Cast members also execute Andy Fiacco's creative, energetic choreography with flair.

The songs, while not particularly memorable like classic musicals of the past, still possess an infectious verve that might make you want to sing along, if not dance. The musical numbers, which won’t make you forget musical theater’s great writers, don’t always move the plot forward. However, they help characters express themselves at a deeper emotional level. There’s variety in this score, with some songs carrying a western/country flavor, while others contain a more contemplative, melancholy melody.

The patter song “Fast,” a tongue-twister, might remind you of the “Very Model of a Modern Major General” from Gilbert and Sullivan’s The Pirates of Penzance. Cast members sing the number at a rapid pace without missing a beat. Never mind that you won’t be able to make out any of the lyrics. Merely listening to them sing the number smoothly and with ease will make you marvel at their talents.

The song suggests that people should fall in love fast. It’s a contrast to “Don’t You Wish We Could Be in Love.” The character singing it is named Roberta, played commandingly by Darcy Hernandez-Gil.

Each of Roberta’s girlfriends “dump her the next day.” Love needs to put on the brakes for a moment, the song suggests.

Just as the songs are varied, so are the characters. There’s high school football quarterback Steve (an at first shy, insecure Arrow ZurSchmiede), who eventually realizes he has feelings for overachiever Kate (an ambitious Mallory Newbrough).

That’s when the trouble starts. The entire school is heterophobic.

That doesn’t sit well with Zanna, who tries to help Steve and Kate. After all, he believes anything done in the cause of spreading love is worthwhile.

The notion of spreading love is nicely captured in scenic designer Natalie Taveras’ visually-appealing, brightly-colored set. Its central image is a large circle with rays extending from around the circle. It’s as though the circle is a sun, which is sending rays of love out in various directions. Within the circle, we witness various projections, including a star-filled, moon-lit sky. It’s an appropriate visual for the more contemplative songs.

During one scene, fog rises from the stage, moves toward audience members and becomes quite heavy. The effect reinforces the fairy-tale aspect of the musical.  The same is true for Peter A. Lovello’s plaid costumes, which also reinforce the light-hearted, upbeat mood of the show. ‘

While it’s not among the greatest musicals, Zanna, Don’t! will engage you for its two hours…and make you think just a bit.

Chalk up another winning production for Island City Stage, a multi-award-winning theater whose productions focus on the LGBTQ community, “but have a heart and soul that is truly universal,” according to its website.