Gregory Maqoma Erupts in a Graveyard 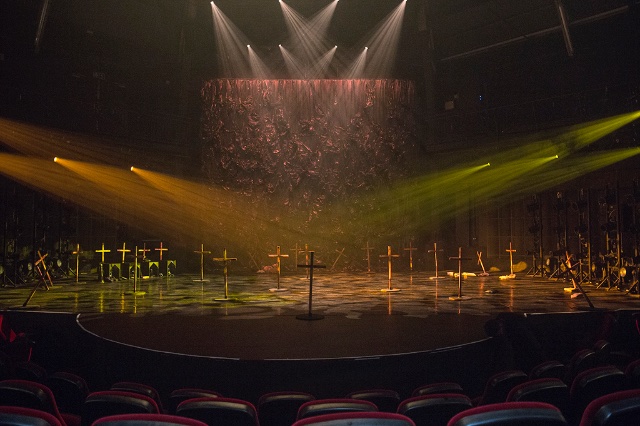 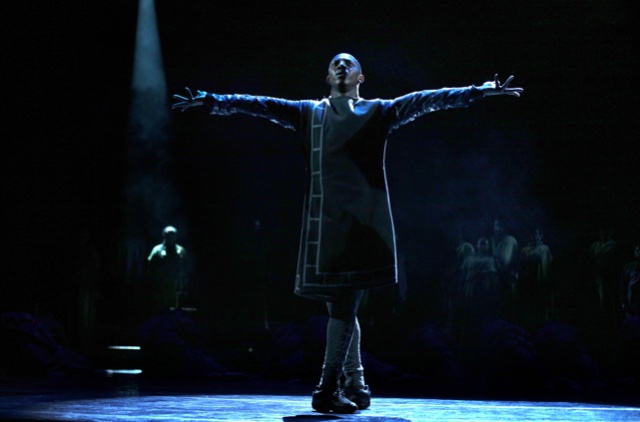 Gregory Maqoma is the professional mourner 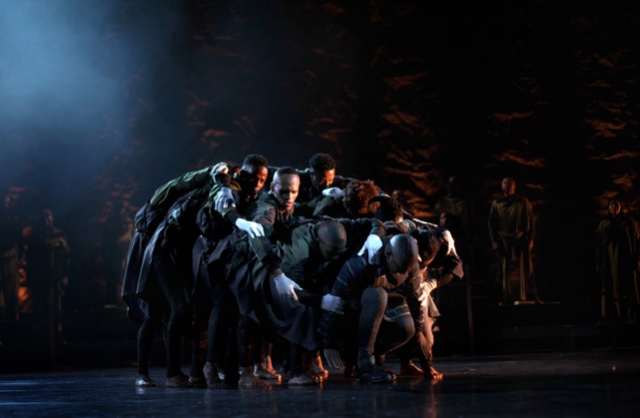 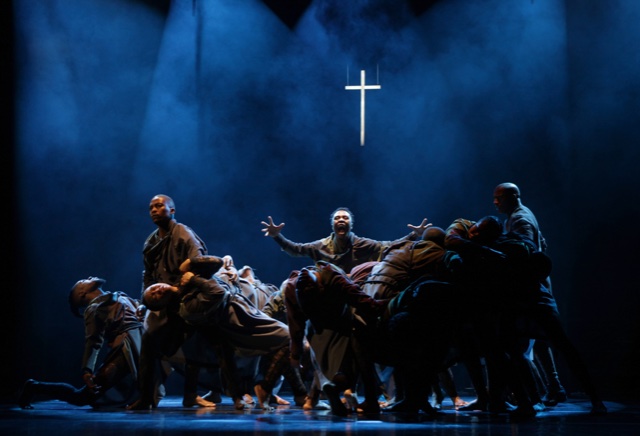 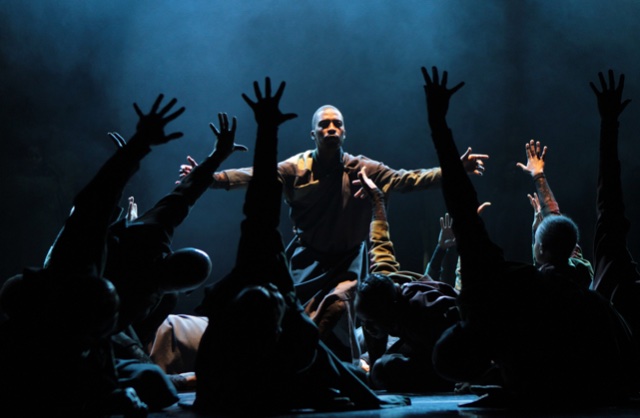 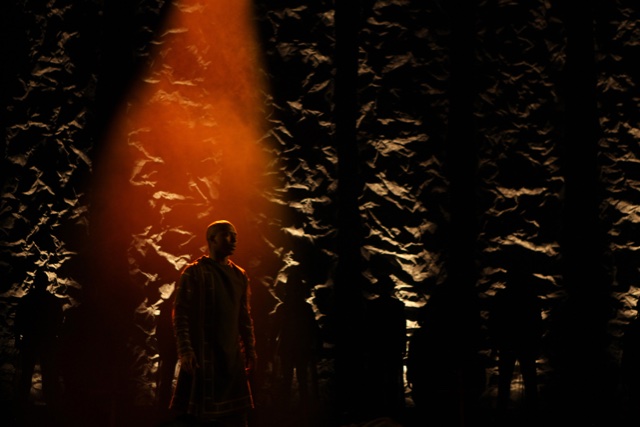 Lighting can switch from dark blue to hot orange 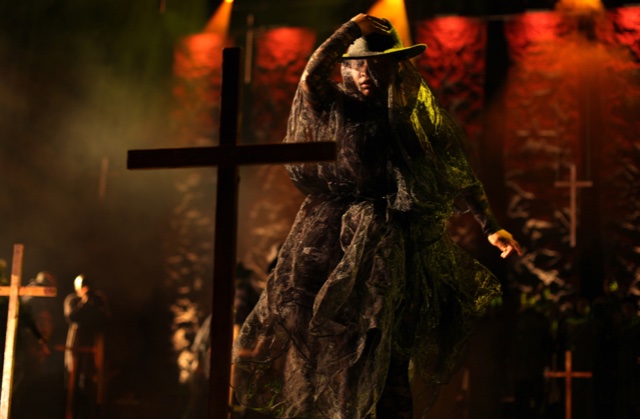 Marching to Ravel of sorts 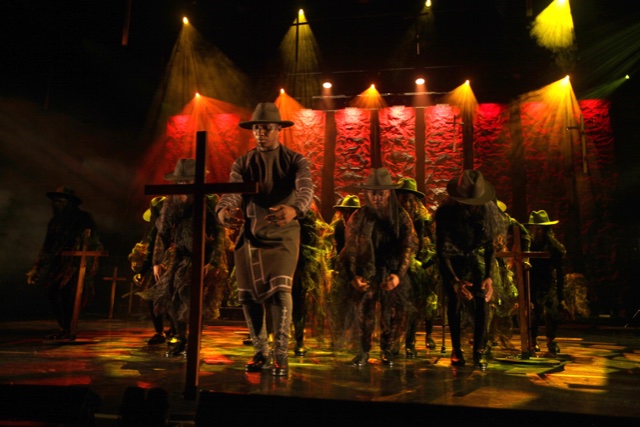 The burden and the uplift spring together in Maqoma's work

In Cion, graves are marked with sticks crossed. They seem to bend to the movement of the professional mourner and his followers.  Light is spotted from the ceiling, sometimes two spots and at others eight. The lights rhythmic entrances and exits fit perfectly with incessant beats of the feet. Out of the darkness comes an extraordinary story of American slavery told in distinctively African movements and tones.

The brilliant South African choreographer Gregory Vuyani Maqoma has adapted Zakes Mda’s novel Cion, which continues the tale of the Toloki, the protagonist of Mda’s Ways of Dying, as he makes his way to America. Here in a small Ohio town he will witness miscegenation and enslavement.

Mda had seen Maqoma’s work in South Africa when the choreographer was only 17 and recognized greatness in him. Very young Maqoma was able to reach far outside his own experience to the Holocaust and create work that resonated with the audience as far from the events portrayed as he was.

Now he moves to the United States and Ohio. Small town ghosts of a family are conjured up to re-enact their experience of rape and slavery.

Each scene holds riveting drama.  Among them are the ritualized beating by whips made of light cloth that sting through the air.  They may be soft brown, but still sear.

Eight dancers and the choreographer are joined by four singers. Opening with a solo, Maqoma, barefoot and robed in a long tunic, walks slowly.  The mourner’s lament unfolds.  Movement in unison, rocking back and forth with arms raised, we feel both energized and saddened.

As the dance continues there is a fascinating duet between sound/music and dance movement.  Clicks get jagged treatment, pirouettes are accompanied by rapidly rising voices.  As bodies writhe, so does the music.  Breath is everywhere heard, and also beautiful decorative notes.

The Isicathamiya a cappella style is embedded in South African Zulu words and sounds. Maurice Ravel’s Bolero is integrated as a processional.  Yet one senses the increasingly frenzied beat in Ravel’s dance reflected in the clicks of the Zulu language.  Click, beat, whip, drums.The singers’ interpretation of Bolero, composed by Nhlanhla Mahlangu with assistance by Xolisile Bongwana, moves smoothly from rhythmic jubilance to plaintive wails. This is the warhorse Bolero, but its fragments are woven into a different story, and the melody is haunted by Toloki.

The group tap out Bolero's rhythms, getting faster and faster until they stomp it out, as they dance on their own graves.  Repetition becomes ritual.

So many elements conspire to create a work that is encompassing and thrilling. The beat of the feet, sometimes bare and sometimes shoed. Instruments call forth original music. The unfamiliar and exciting movements of the Vuyani dancers capture the audience in an unusually captivating event.

According to Maqoma, “I took it upon myself to play the role of Toloki, the lead in this piece because I feel strongly that I need to say something. And my dance, and my work, is a powerful way for me to comment. Other people use hashtags, I want to use art as commentary about how we treat each other as human beings.”

The evening is enlivening, even as it focuses on death.

Find this dance theater wherever you can.  Next in Washington DC.