A Gorgeous Voice for Justice 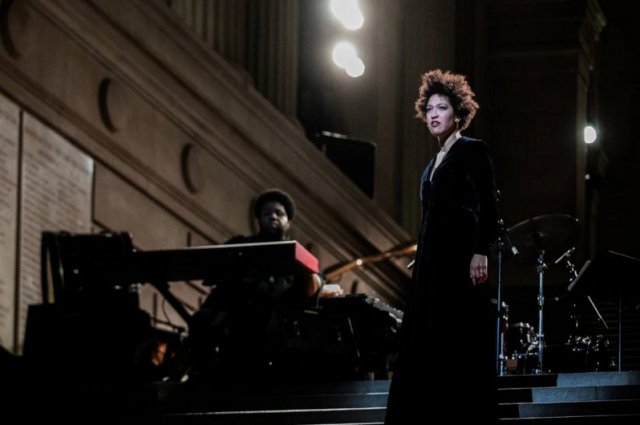 Julia Bullock is a young soprano who is designing a career to her personal specifications. Peter Sellars was attracted to her voice and performance after a Julliard college appearance as the young Vixen in Leoš Janá?ek’s Cunning Little Vixen. He lured her to Teatro Real in Madrid to perform in Henry Purcell’s “The Indian Queen.” She has performed in his work in San Francisco, and this summer took on the role of Kitty in “Dr. Atomic” at the Santa Fe Opera. She is now Artist in Residence at the Metropolitan Museum of Art.

With percussionist Tyshawn Sorey she created a work where she inhabited Josephine Baker, the singer and dancer who grew up in St. Louis like Bullock. In it, she sang Baker’s songs and danced. It was a ravishing evening, in which both Bullock and Sorey captivated the audience with their take on Baker, who is said to have moved the way Duke Ellington played. Bullock's voice is wide-ranging and rich.

“Perle Noire: Meditations for Josephine,” was presented on the Grand staircase of the Great Hall of the Museum. Baker would often end a club appearance with the curtain drawn over a steep staircase. As the curtain opened, a myriad of white men in top hats and tails danced down the stairs. As they landed at the bottom, Baker appeared at the top of the stairs in a shimmering blue dress, plain, but showing off diamonds on her neck, her arms, her wrists and at her waist. She was aglow as she began to sing a final song.

Bullock appears at the top of the Grand staircase and slowly descends, steadily, smoothly singing a text prepared by Claudia Rankine. It is based on Baker’s own words as they have been arranged by Bullock and director Zack Winoker.

Seated on a platform midway up the stairs is Sorey, surrounded by his instruments. With him are members of the International Contemporary Ensemble on flute, saxophone, bassoon, guitar and violin.

Bullock sings of the diaspora that was Baker’s life. Blackbirds, Africa, Love, the West Indies. A provocative number asks what it would be like to be white. A sassy song describes an errant lover. "The Dry Earth, a Negro spiritual, begins to directly address the black man’s dilemma, and asks, 'How Long?' "

Black divas in dance like Katherine Dunham, and in song like Lena Horne, used their celebrity to join the cause of their people. For Baker, who left for France when she was very young, contributions came to both countries in which she held a passport. She was part of the French Resistance in World War II and honored for her contributions. Returning to the US, she participated in the fight against racism, joining the 1961 March in Washington. Coretta Scott King asked her to be the face of the movement after King was shot. Baker surely capitalized on her access to the public stage as an arena to advance the cause of racial justice and justice for women. Beyoncé Knowles appropriated her signature banana skirt in a sequined version for”Indian Rocks.”

The original black diva’s bravura has been quoted, sampled and parodied. No one has dug as deep into her feelings as Bullock.

She clearly takes on Baker's mantle. Her sober singing, gorgeous in its texture and feeling, begins to make a case through art for the liberation of her people and  women.

It was a moving evening of thoughtful, actionable song.