What We’re Up Against by Therese Rebeck

Revival of 2011 Play in Chicago 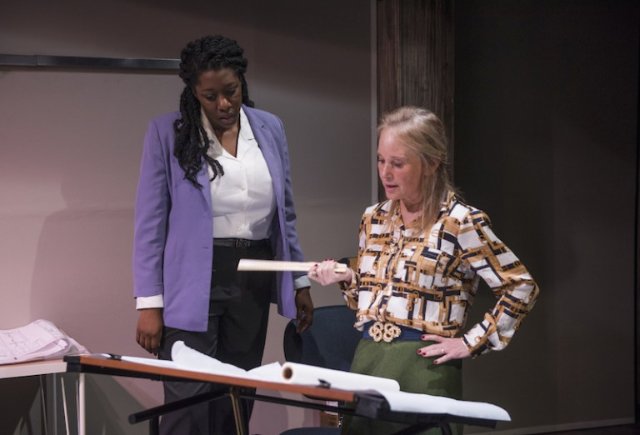 Playwright Theresa Rebeck is a master of dialogue and never hesitates to portray the bad manners of her contemporaries. Her 2011 play, What We’re Up Against, just opened as the inaugural production of Compass Theatre, a new Chicago Equity company. It’s the story of an ambitious woman architect trying to get respect and decent work assignments in a small architecture firm. “This is what we’re up against” is what two male architects complain as they discuss their “nightmare” female colleague. Stu (Charlie Strater), the lead partner, calls her “a lying, deceitful, dishonest little manipulator.”

What We’re Up Against is an auspicious beginning for a new theater company. The play, set in 1992, was revived last year against the backdrop of the #timesup movement. It’s not about physical sexual abuse, but it’s very much about gender bias, condescending and insulting attitudes toward women, and that unbreakable glass ceiling. The plot and dialogue are sometimes funny and often infuriating.

The playis artfully staged by director Lauren Shouse. The excellent cast and crew of this new company include many theater veterans, including Echaka Agba as Eliza, the ambitious architect; and Denise Hoeflich as Janice, her female colleague. Shouse guides the cast of five briskly through a series of scenes set in the offices and conference rooms of this firm, as the participants work through the details of the two projects that are consuming their time. Oh, and a greet deal of drinking gets done. Everyone seems to have a bottle (scotch, vodka) and they drink it straight up.

Agba plays a strong Eliza, desperate to be assigned to a project after five months at the firm. In a project-based business like architecture (or law or management consulting), your assignments depend to a great extent on the project leader wanting you on the team. As Eliza makes various efforts to show her worth, she finds that Janice, her female colleague, isn’t supportive. Janice just wants to get along and keep her job. Make no waves.

In project meetings, we see the architects work over the expansion and renovation of a shopping mall. Ben (Ted James), the practical architect who’s leading the project, just wants a solution for the air ducts left over from the original design. But Weber (Jeff Kurysz), a new architect, wants to deal with history, vision and redefining the meaning of ; he reels off these pretentious ideas in a slick monologue. Later Eliza laments to Janice, “Everywhere I go, these fucking golden boys with their architalk! What is it about a pretty boy with no brain that makes all these shitheads with power start singing love songs?”

Eliza isn’t always kind to her female colleague either. When Janice insists she should be patient about being accepted, Eliza says, “Get a clue! You’re their beard! They love women who are incompetent and mediocre because it makes it easier to dismiss them! When someone really good shows up they shove her in a corner and say she’s got an attitude problem.”

The only thing about What We’re Up Against that makes it a period piece is the lack of technology in this 1992 architects’ office. Props include drawing boards, blueprints and t-squares rather than computers. Everything else about Rebeck’s play could be written today.

I knew this play would make me angry. I knew the basic premise (gender bias in an architecture firm) and I was interested in both. But then I read the script before seeing the play, something I don’t usually do. I like to see a new play (or new for me) as an audience member would, without any familiarity with plot or characters. (I use the script as reference while writing about the play.) Rebeck’s script dramatizes women’s efforts for professional respect as they were in 1992 and—inexplicably—as they still often are today.

The prolific Rebeck has written two dozen plays, three novels and a book of essays, plus several films and TV shows. I reviewed her Broadway play, Bernhardt/Hamlet, starring Janet McTeer, in October. Her television work includes creating the NBC showbiz drama “Smash,” and writing for “Canterbury’s Law,” “LA Law,” NYPD Blue,” “Law & Order: Criminal Intent,” “Dream On” and “Brooklyn Bridge.”What We’re Up Against, written in 2011, was unproduced until its off-Broadway premiere in 2017.

What We’re Up Against by Compass Theatre runs 90 minutes and continues at Raven Theatre, , through February 9. Tickets are $35.