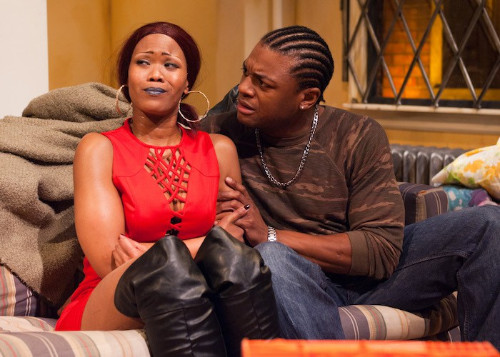 The bluesy, politically charged music of Nina Simone is the aural background for Sunset Baby, Timeline Theatre’s Chicago premiere of the 2012 play by Dominique Morisseau. Nina (AnJi White), the stubborn, independent woman whose life, dreams and family are the heart of this story, is Simone’s namesake.

Director Ron OJ Parson has crafted a tough, sometimes warm-hearted play about a family torn apart by drugs, crime and broken dreams. Nina lives with Damon (Kelvin Roston Jr.), a street-smart criminal who wants to give Nina the life she desires. His attitude is softening and he may be almost ready to retire from the game. The two of them are saving for their future through drug dealing and other unsavory activities. Although it becomes clear they don’t share the same view of that future.

The play is a series of emotional, confrontational scenes between antagonists. Nina and Damon over their future. Nina and her father, Kenyatta (Edward Van Lear), over their past. Nina is tough and focused on her own future; she has built walls around her emotions, which the two men who care for her aren’t able to break through.

Nina’s parents were Black revolutionaries in the 1970s, working with the Black Panthers in Los Angeles and then in New York. Both of them grew disillusioned when the movement was infiltrated by “fake FBI-posin’ brothers.” Kenyatta says, “I lost brothers in the fight. Best friends became enemies because you couldn’t trust anybody any more. Once the org was infiltrated, we were never a unit again. It was too dangerous to be vulnerable.”

Her mother Ashanti died recently and left a package of letters to her daughter—a collection of love letters from Ashanti to her husband, written while he was a political prisoner. Now the letters are in demand by scholars and publishers—and by Kenyatta, who visits his daughter to see the letters, which he never received. Nina rejects her father because of the way she believed he treated her mother. She tells him, “Only thing I value is money. Everything else breaks, wears off or dies on you.” And later, she says, “I stopped giving a fuck. Long time ago.”

The eight scenes of the 110-minute play are bracketed by Kenyatta’s monologues to a video camera, in which he expounds his views, softened by age and experience, on family, life and revolution. He’s telling his story to his daughter.

The title, Sunset Baby, refers to Nina’s childhood memory of a time with her father, which she remembers when he gives her an old photo. In his last monologue, he talks to Nina, remembering her as a baby so small he could hold her in his hand. “I want you to have the world. Was trying to give it to you. Skylines. Sunsets. Life. Beauty. Highways. Bays. Liberation. (beat) Not this. Not harsh. Not broken glass and bullets and dope. (beat) I want you to have the world.”

The three actors all are strong performers. Van Lear is moving as a father whose life was defined by ideology and now is trying to retrieve some of his past. Roston also is trying to change his past; he has a son with an ex-partner but doesn’t do a good job in the paternal role. White is convincing as a strong-willed woman focused on her own liberation.

Sunset Baby continues at Timeline Theatre, 615 W. Wellington Ave., through April 10. Performances are Wednesday through Sunday and tickets can be purchased for $38-51 online or by calling 773-281-8463.