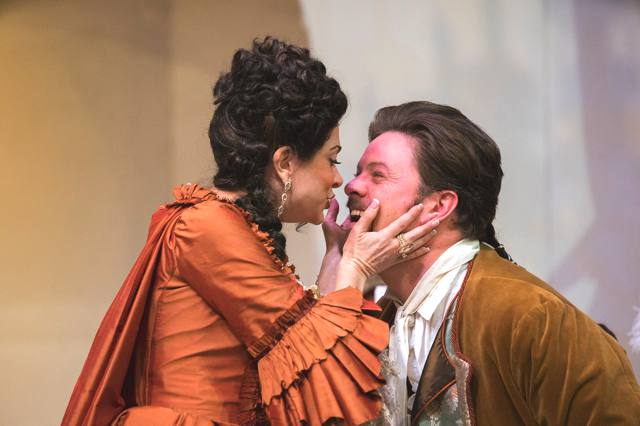 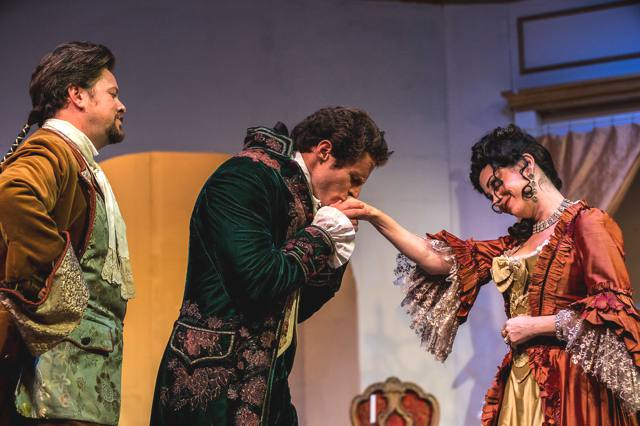 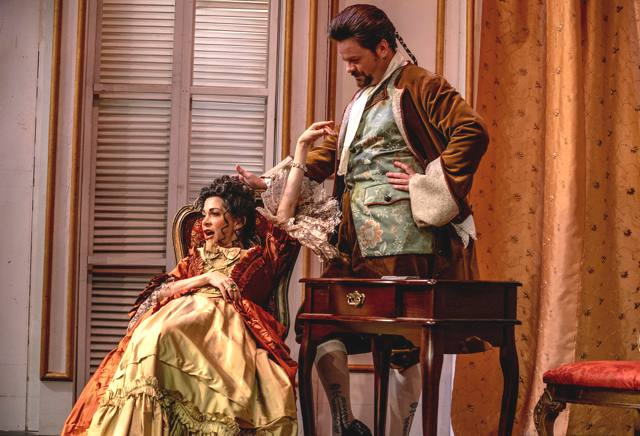 Academy Award-winning screenwriter and playwright Christopher Hampton struck gold with his cleverly reimagined 1988 movie (based on his hugely successful 1985 play) sex-fueled adaptation of the 1782 novel “les Liaisons Dangereuses” by Pierre Choderlos de Laclos.  It’s been a popular and a favorite play for regional and community theatre theatres ever since.

The play centers around two ex-lovers: The Le Vicomte de Valmont (Richard Baird) and La Marquise de Merteuil (Jessica John Gercke) who scheme to ruin the reputation of an innocent young aristocrat Cecile de Volanges (Gentry Roth).  The Marquise is seeking revenge for a betrayal by a former lover. Valmont, king of the libertines, goes along with the scheme because he’s in love with himself as a stud and lives to bed any and all attractive woman within his reach.

Together they devise a series of seductions and manipulations but soon realize that their intricate plan for each to seduce a victim is more than they bargained for, and this latest game plan and their targets may be their most dangerous by far. There are twists and turns by all of the players in this game of passion, emotion and consequences, which in Act One, “almost plays like a restoration comedy”, according to director/actor Baird.  In Act Two, however, the dangerous game of love gets more serious.

Mr. Baird scores in a wonderfully nuanced performance balancing Valmont’s predatory tendencies while at same time bringing a lightness and a debonair approach of supreme confidence that is entertaining and less off-putting.  Ms. Gorcke as the Marquise Merteuil, has the stunning polished look of a woman who understands the power of her beauty and experience, and knows how use it to dazzle and lure men to her bed.  Both Valmont and the Marquise are formidable players in the game of seduction.

Amanda Schaar as Madame de Tourvel, delivers a finely judged performance that begins as a pawn in the seduction scheme, but becomes the true love of Valmont at the play’s end. Their scenes together are both sexy and poignant, underscoring the redemptive power of true love.

The supporting cast is a director’s dream; a true ensemble cast who stay in the moment and who are fully engaged include: Connor Sullivan as Le Chevalier Danceny, the young boy toy of the Marquise, Gentry Roth as Cecile de Volanges, the young and virginal daughter of the clueless Madame Volanges, played by Terril Miller.  Dagmar Fields as Valmont’s Aunt, Taylor Henderson as Emilie, Justine Lang as Azolan, Valmont’s valet, and Neil McDonald as the majordomo. Crystal Brandan, and Christopher Torborg complete the cast.

“Les Liaisons Dangereuses” is a splendid production, chock full of terrific performances, where smart and clever directorial touches abounded at the opening preview that I attended. The cast members who are charged with striking the set pieces and props at each performance, accomplish it in a measured manner to the accompaniment of French drawing room music. A nice touch that has the creative fingerprints of co-directors Kaitlin O’Neal and Richard Baird all over it.

The gorgeous costume designs of Howard Schmitt sparkle in the lighting design of A.J. Paulin. The clever Set Design by Guillo Perrone is not only functional for the actors, it allows for the large expanse required for the dueling scene in Act Two. Thanks to Fight Choreographer J. Tyler Jones, a believable tense sequence of the duelists is nicely accomplished.

The New Fortune Theatre has a stellar, first rate, winning production, on its hands you won’t want to miss.   For reservations and ticket information call Lyceum Events, at 619-544-1000, or go online for tickets at www.lyceumevents.org.