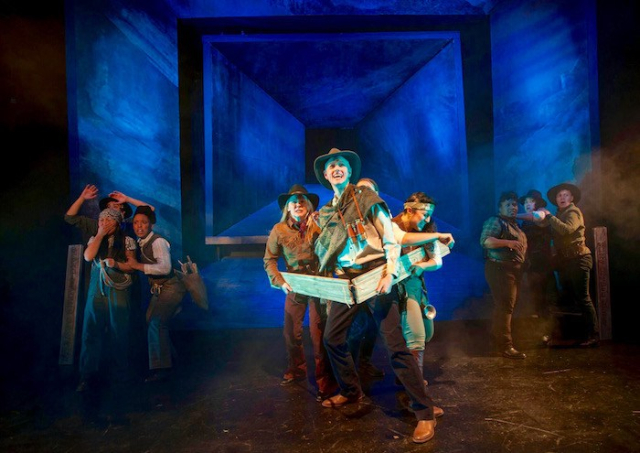 Men on Boats, a regional premiere now on stage at American Theater Company, is the story of the 1869 exploration of the Green and Colorado rivers for the U.S. government. The discovery expedition traveled through Wyoming, Utah and Arizona and into a great canyon now called the Grand Canyon. Of course, like Columbus “discovering” America, the local native Americans were familiar with the rivers and the great canyon all along.

John Wesley Powell, a Civil War veteran who lost an arm in the war, leads a government-sanctioned expedition with nine other men and four boats. The story relates the hazards of small boats on the raging rivers. The crew loses several men and much of their carefully guarded provisions during the trip.

The script by Jaclyn Backhaus is drawn from Powell’s journal. She notes that the original trip was carried out by white men, but suggests that the crew should be made up of “a genderfluid cast of women and folks otherwise defined.”

The capable cast is led by Kelli Simpkins as Powell and Kelly O’Sullivan as William Dunn, the second in command, who chafes at Powell’s cautious leadership style. Other notable performers are BrittneyLove Smith as Bradley, Erin Barlow as Goodman and Arti Ishak as Sumner.

The actors call each other by their last names, dress and perform in a masculine style (except for squealing and jumping at the sight of snakes). The gender-fluid casting does not overwhelm the narrative. In some cases, it gently mocks the testosterone-fueled stories of the American West, such as when Powell and Dunn feel the need to name sites they have found after themselves.

Will Davis, ATC’s new artistic director, directs and choreographs the production, as he did when the play was first produced in New York in 2015. The explorers’ journey over the raging river rapids is staged by creating the watery environment through lighting (designed by Brandon Wardell), sound and original music (by sound designer and composer Miles Polaski). The scenic design created by William Boles features a vast chute or tunnel suggesting the river’s or canyon’s depth and risks. The explorers’ “boats” are folding wooden pieces like the prow of a boat.

A story like this—a team’s adventure fighting wild rivers—is difficult to dramatize on stage and the design team did not take the easy route of using projections of dramatic watery dangers. Davis’ choreography of the 10 men rowing, heaving and ho-ing certainly imitates the activity described. But too much of the 100-minute play is devoted to this extreme exercise. After a few minutes, it’s simply boring to watch. Men on Boats does offer some gentle humor, stories of personal bravery and tragedy, and a fascinating history lesson. The Powell expedition, for instance, meets members of the Ute tribe, who live on the reservation in southeastern Utah. The Utes offer the starving expeditioners food from their personal crops.

Powell’s expedition to gather geographic and geological data about the Green and Colorado rivers and the great canyon of the Colorado River was an important effort to survey the unknown west. It led ultimately to the Glen Canyon Dam project, which was under development when I lived in Cortez in southwest Colorado (near the Four Corners). It’s now a national recreation area and one of its features is Lake Powell, which, as a character in the play promises, is a large manmade lake named for the expedition leader. After the construction was announced, I was part of a small group of local journalists who flew over the Goosenecks of the San Juan River in a small plane on the way to photograph the prospective Glen Canyon Dam site.

Men on Boats continues at American Theater Company, 1909 W. Byron St., through February 12. Performances are Thursday-Sunday with tickets priced at $38.