Tribute to Matriach of Political Dynasty 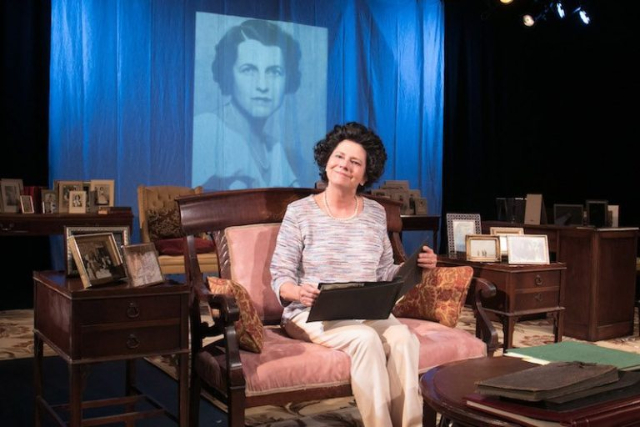 Rose Kennedy, the “queen mother” of Camelot, is nearing her 79th birthday. She’s well dressed, well coifed, calm and self-assured. She moves like a 79-year-old woman, slowly, a bit creakily. But her mind and her memories of her decades as the mother of the famous and ill-fated Kennedy clan are sharp and mostly unemotional.

Linda Reiter creates a vivid replica of Mrs. Kennedy’s appearance and manner in Rose, the one-woman show written by Laurence Leamer and directed by Steve Scott. The Greenhouse Theater Center first staged Rose in 2017 and Reiter received a Jeff award for best solo performance. The Greenhouse has now remounted the show, which is set in late July 1969.

Rose carries on a 90-minute monologue, as if she’s regaling a biographer. She moves from chair to loveseat to the bay window in the Hyannis Port sitting room, occasionally looking anxiously out at the bay where Teddy is sailing. (It turns out that he isn’t.) She reminisces about family photos in frames and albums and we see those images projected.

Rose tells the family history beginning with her childhood as the daughter of a Boston politician, John (Honey Fitz) Fitzgerald, and detailing her marriage to Joseph Kennedy, a successful executive and financier, who opposed U.S. entrance into both world wars. Although he served as the first chairman of the SEC and as ambassador to the Court of St. James, it was his sons he pushed into the public sphere. Rose’s story continues through political campaigns, wars, deaths and the unfortunate treatment of her intellectually disabled daughter, Rosemary.

Rose is a warm and absorbing journey through an era enhanced by our memories of the larger-than-life Kennedy brothers. Although the Camelot legend was invented by Jacqueline Kennedy to burnish her late husband’s legacy, it colors the way we remember the legendary family.

The story of the Kennedy family is relevant today in many ways. The three Kennedys who held public office were considered intelligent, capable public servants (except of course by their detractors). Robert Kennedy probably would have been elected president had he not been assassinated in June 1968 in mid-campaign. We know more now about family scandals that were only whispered about at the time. In this era of way-too-much-information, we might still ignore the rumors, because the Kennedys were our royalty.

Playwright Leamer, a journalist and historian, has written 14 books, mostly nonfiction, including a trilogy on the Kennedys. Rose is his first play.

Rose continues through March 11 at the Greenhouse Theater Center, 2257 N. Lincoln. Tickets are $35-45 for performances Thursday-Sunday.