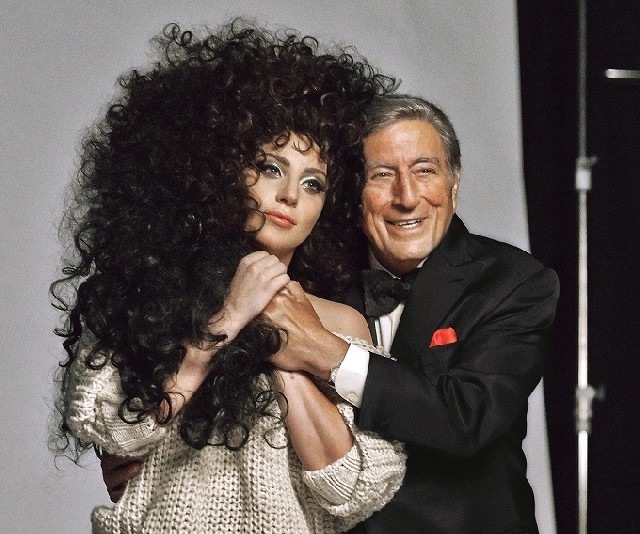 The one with the hair is Lady Gaga the guy under the rug is Tony Bennett.

Although the Boston Symphony Orchestra is notable for having deep pockets Mark Volpe, who manages the business side, has to keep a keen eye on the bottom line. That means filling seats in the Shed and on the lawn of the venerable Tanglewood summer festival.

While honoring a  mandate as the summer home of the BSO, like all symphony orchestras, there is the challenge of sustaining interest in traditional classical programming. To make these offerings viable there is a rotating mix of guest conductors, most of whom are well traveled and elderly, as well as star soloists that audiences want to hear.

There has been pressure and controversy about widening the scope of programming to attract a younger audience. This ranges from hiring a vital young conductor like the much coveted Andris Nelsons to adding more "popular" concerts building on the great success in recent years of mega appearances by a Berkshire based neighbor, James Taylor.

Every orchestra in America, many with financial issues, is looking for the right mix of old and new. There is considerable risk involved. If the programming goes too pop there is the potential of loosing its base. This mostly entails a loyal but aging audience. In the pricey Shed on evenings of classical music it is rare to see individuals younger than retirement age. Dropping down a generation for concerts by non classical artists the demographics for long in the tooth rock bands is mostly middle aged.

The much coveted audience of twenty and thirty somethings viewed as vital to sustaining Tanglewood is not that excited about hearing music that their parents grew up on. One interesting exception was back to back bookings of the rock group Train which is a band with a teeniebopper following. The kids snapping away on their cell phones were chaperoned by adults. Seeing Train once was more than enough for me but clearly it was not about raising the artistic bar.

Yet again Taylor returns and will surely sell out his performance. Sheryl Crow who appeared with him will have her own night on the expanded early season on June 16. For Volpe nothing succeeds like success so again Diana Krall returns on June 21. In the category of dino rock we will hear  Huey Lewis previewing the season on June 28. It's been decades since I covered one of his concerts. Broadway star Idina Menzel (If/Then) appeared with Pops a few seasons ago and now will be the star of a concert on August 29. The Piano Guys will make their first appearance the night before.

For the perfect combo of something old and something new the odd couple of Lady Gaga and Tony Bennett are slated for August 30. By then the BSO is back in Boston. It seems that Tanglewood has beefed up booking for that home stretch going Texas holdem all in with pop offerings. They hope to run the table with Piano Guys, Menzel and Gaga/ Bennett.

By far the Gaga/ Bennett evening is the most attractive and adventurous of the non classical concerts. They are touring on the success of  top of the charts CDs. There was a stunning PBS program of them performing revealing both musical and personal admiration and affection. The tandem represents a brilliant career move. Gaga will draw upon her own youthful fan base while Bennett is regarded as the last of the master crooners of the golden age of jazz singers. It's a win/ win for them as well as for bringing a diverse demographic to Tanglewood.

There is also the usual legerdemain in the programming of standards like Keith  Lockhart with the Pops and the venerable John Williams or his much loved Film Night.

What follows is the Tanglewood Press Release

Tickets for the 2015 Tanglewood season, priced from $10 to $124, go on sale Sunday, January 25, at 10 a.m. at 888-266-1200 and www.tanglewood.org, where visitors can also find full details of the 2015 Tanglewood concert schedule (James Taylor July 4 tickets go on sale on Saturday, January 24). Tanglewood—this country’s preeminent summer music festival and the summer home of the Boston Symphony Orchestra—is located in the Berkshire Hills between Stockbridge and Lenox, MA.

New additions to the 2015 Tanglewood schedule

Also the following have been added since the original announcement: