The Brothers Chapman at London's Serpentine 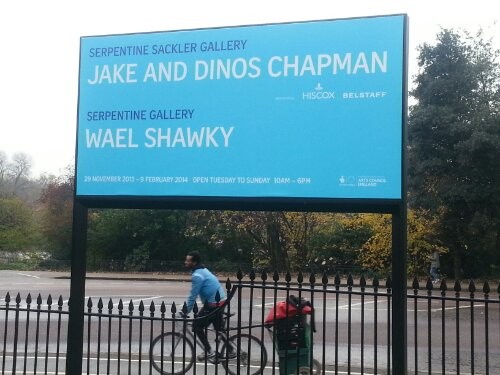 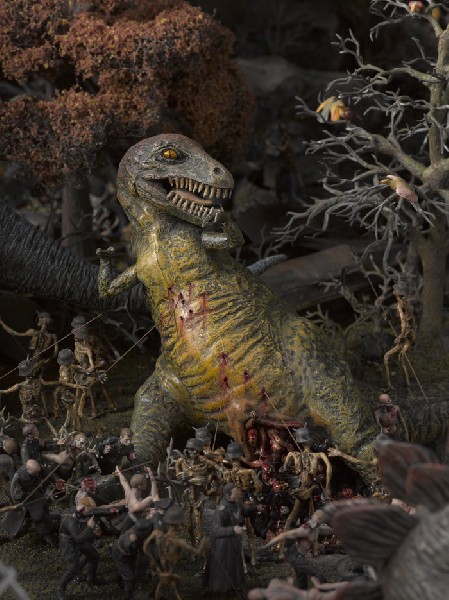 “We are sore-eyed scopophiliac oxymorons … disenfranchised aristocrats, under siege from our feudal heritage … our bread is buttered on both sides …” this was stenciled on the gallery wall as the artists introduction to the world over twenty years ago—fledglings from the nest of Gilbert & George, having once been their art technicians—yet arriving as the true enfants terribles of the then Brit Art scene; meting out schlock shock and conceptual irreverence. Yet the Chapman brothers have never lost the attention to detail of obsessively committed artisans—a quality rarely shared by their peers.

Come And See is another of the artists’ exhibitions to be filled with insalubrious gore and crude hyper-reality. This is the classic art dialectic of vanitas; birth, death, sex, horror … and of course McDonald’s.

Yet the artists attention to detail is never more obvious than in their miniaturised apocalyptic landscapes; the minutia of degradation and destruction, iconoclastic works of vitrine-encased dioramas; Hieronymus Bosch-style miniature Hell-scapes, in which zombie-Nazis fight for superiority with multiple Ronald McDonalds and his burger-headed fiends. The surreal nightmare of tiny violence is only offset by an extraordinary level of detail. This is a comedy-horror juxtaposed with the crucifixion of Mathias Grunewald, crafted from a toy box of intentional puerility.

From the hand-painted bronzes of organ-infused devices on plinths, to the copulating taxidermied animals complete with contorted facial expressions —and a video piece called The Organ Grinder’s Monkey—or more accurately a series of video sketches with actors; Rhys Ifans as the artist, David Thewlis as the hapless alcoholic art tutor, and Samantha Morton as Mrs. Chapman giving birth to an adult Jake. Humour is as important in this exhibition as irreverence and gore—and all presided over by Ku Klux Klan clad mannequins wearing rainbow socks and Jesus creepers.

As a young student diligently made notes while watching David Thewlis voicing an animated cockroach aspiring to live in the studio of a ‘real artist’—namely Rhys Ifans—and I belly-laughed with the gusto that the ‘Brothers Grimm’ demanded—I felt that she was missing the point.

But hidden amongst the two-dimensional pieces is a more serious conversation in waiting; a reference to the artists ‘surfaced’ works created from the bought and appropriated Disasters of War Series by Goya, drawn over with the ghoulish and questionable iconography of Ronald MacDonald. This was a reference to the changing values of iconography from religious to capitalist, a Duchampian dialogue about authorship in art, and the committing of art-historical sacrilege in the defacement of ‘high-art’ to, ironically, create ‘high-art’.

The Goya prints were simultaneously devalued and revalued in a dialectic about values—to change the location of a value [of profit]. The final intentional irony of the work being that the numbers of the original Disasters of War prints had decreased, increasing their value.

The value of the prints bought and ‘added to’ by the artists also gained a new potentially higher value for being a post-postmodern piece of Appropriation Art; a ‘Two for the price of one’ conceptual capitalist garage sale. Call me cynical for this opinion, but I’m merely joining the club.

Often the duo’s conceptual underpinnings are as meticulous an invention as their craftsmanship. As with a number of the artists two-dimensional works that have been manipulated into ‘tattoo flash’ and made available in book form. In purchasing the book, the viewer can choose a tattoo from any number of the Chapman brothers works and in being tattooed with the design can actually become a part of the artists’ oeuvre.

The equation of an artwork that becomes the very thing that it discusses and derides has a certain cynicism. For example; art does not have to be amoral to discuss the amorality of a particular system. This seems a clever and cynical equation; an art object that attacks consumerism at the same time as supporting its own market. If not for the genuine commitment and passion shown in the execution of the work you might weep at the cyclical moral horror. A horror far more disturbing than miniature nihilistic genocidal maniacs.

The exhibition is the realization of an amoral infantile amusement taken to both macro and micro scales, but the elongated boorishness of callow creatives this is not.

Shock in art is a dead concept in a contemporary world of visual saturation. If not for the tools with which these shocks are delivered; being juxtaposed with humor and the slavish commitment to minuscule hand-crafted detail—a mind-boggling feat reminiscent of Renaissance artisans—often taking the artists themselves months if not years to create. But the greatest shock of all is not visual but found in the duality of certain works to also be what they actually pertain to discuss.