Art of the Ozarks

From the Old Frontier to Fine Arts 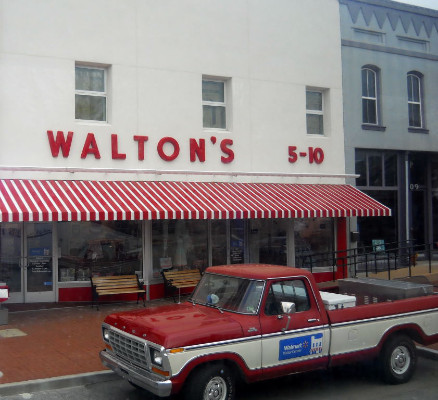 The first Walmart in Bentonville Arkansas. 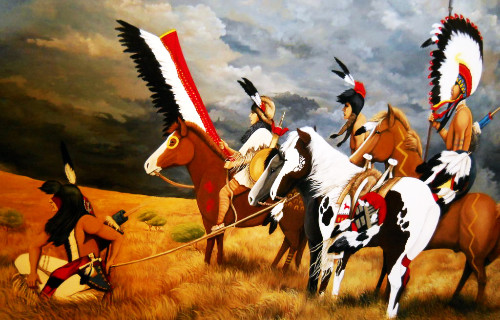 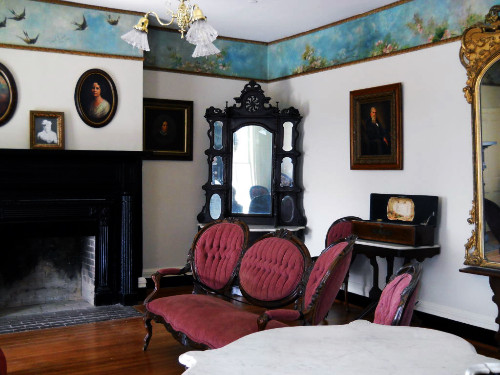 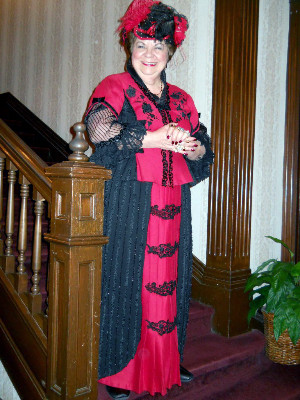 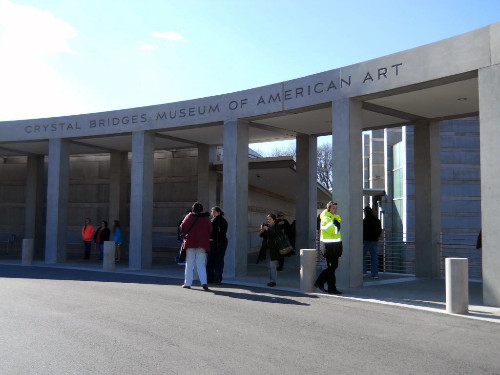 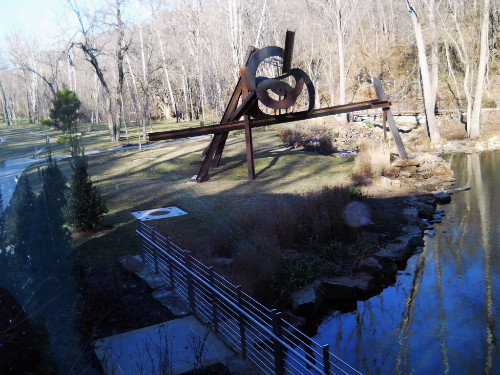 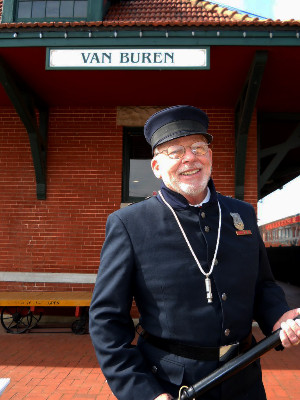 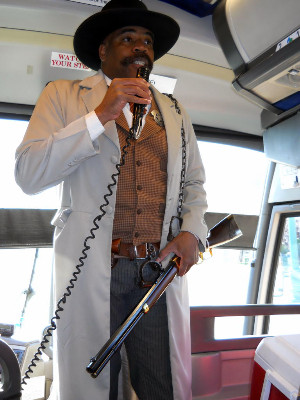 World-class hospitality remains a tradition in all four corners of Arkansas. And the artistic attractions  fill the state with opportunities for cultural tourism. Spectacular Crystal Bridges Museum in Northwest Arkansas is the crown jewel of recent developments. This museum attracted over half-a-million guests during its first year which illustrates the high-quality of its exhibits.

Arkansas, the Natural State is a perfect destination for anyone seeking beauty, outdoor activities, art museums and historic sites.

From Little Rock, we traveled to Fort Smith which is located on Arkansas-Oklahoma border. Fort Smith was established in 1817 on the banks of the Arkansas River. Wild West history is celebrated in Fort Smith. During the Civil War, the North met the South here and there was lots of blood shed.

Soldiers’ lives intersected with settlers during frontier days and still do so today with the Fort Chaffee military base.

True West magazine selected Fort Smith as the Top True Western Town for 2013. Fort Smith has many sites preserving and commemorating the Civil War and Trail of Tears.

Fort Smith bills itself as the place “where the new south meets the old west.”

At the turn of the century, Fort Smith was a raucous border town where many houses catered to one of the many vices that were practiced and enjoyed openly. Miss Laura’s Brothel  was in the infamous red-light district. Miss Laura’s brothel soon became one of the most celebrated bordellos in the Southwest. Her ladies were known to be the most refined and the healthiest of Fort Smith’s daughters  of joy. Miss Laura herself was an attractive and poised lady who was known to have occasionally confronted a rowdy customer with a loaded .45.

In the fall of 1992, known as Miss Laura’s Social Club reopened as the Fort Smith Visitor Center operated by history-loving volunteers. It now has the special distinction of being on National Register of Historic Places.

One of the most outstanding statues in Fort Smith is U.S. Marshal Bass Reeves, a 25 foot work of art. He was an Arkansas native and one of the first black lawman west of the Mississippi River. Born into slavery, Reeves served for 32 Years under Federal Judge Isaac C. Parker. Reeves was one of the most feared lawman in the Indian Territory. His statue dominates the Riverfront.

At the Fort Smith National Historic Site, you can discover what life was like on the lawless frontier. This site is one of the more than 380 parks in the National Park System.

Fort Smith has  the recent distinction of being selected to be home of newly planned U.S. Marshal Museum.

Van Buren was our next stop. This city became a shopping Mecca for hard-to-find collectables, one-of-a-kind gifts, original art and local Ozark crafts. We enjoyed strolling along the beautifully restored Victorian Main Street also known as Van Buren Downtown Historic District. Many in our group filled up shopping bags with their treasures.

The commanding Drennen-Scott house overlooking the Arkansas River was home of Revolutionary War Descendent, Jon Drennen and his family. It is now a “working laboratory” for University of Arkansas students as they re-create the century-and-a-half old home linked to The Trail of Tears, the Underground railroad and the Civil War.

This magnificent sprawling single-story home  built in 1836 and its contents are listed on the Register of Historic places. Their antebellum furniture wonderfully illustrates the time and has been restored to museum standards.

One of the highlights of this tour was the train trip on Arkansas Missouri Railroad train riding in a gorgeous and a magnificent antique Pullman-style elegant car from Van Buren to Springdale. The 1920s rail cars exude the opulence of days gone by with shiny brass fixtures, rich mahogany paneling and plush velvet benches.

Along the way, we experienced and enjoyed a breath-taking Ozark mountain panorama of Boston Mountain in all its glory though the train windows.

A special treat was being served a delicious lunch provided by the crew in period costumes for authenticity of an elegant old-west experience.

Once in Springdale, we traveled to Crystal Bridges Museum of American Art in Bentonville.

A self-guided tour at Crystal Bridges introduces you to some of the best-loved works of art in their collection; provides insights into the stories and the artists and takes you deeper into the artworks themselves.

Crystal Bridges features more than 400 works by American Masters that highlight the full scope of American art and history. The collection has been arranged chronologically to tell the story of America’s history as seen by the artists.

The grounds of the museum are as much a part of the experience as the art inside. Stewardship of the natural environment is a key element of Crystal Bridges mission, and informs their overall philosophy-that art and nature are both vital to the human spirit, and should be accessible to all. Take note of all the sculpture on the Crystal Bridges grounds.

To learn about America’s first inhabitants, we visited the Museum of Native American History.  Genuine artifact reflected and demonstrated what life was like with displays dating back 14,000 years ago leading up to recent historic times. Represented are tribal heritage of Apache and Cherokee.

Another major attraction in Bentonville is the very popular original  Wal-Mart Five and Dime, also now Wal-Mart Visitor Center. Here you can view everything including exact replica of Sam Walton’s personal office to his favorite old Ford truck and many other Walton family treasures.

They have also opened up the Spark Café’, a 1950s-style soda fountain and coffee shop.

On our way to our final destination Eureka Springs, we visited Thorncrown Chapel which is one mile west of Eureka Springs on Highway 62 West. A little off the beaten track but well worth the visit!

Thorncrown Chapel is called “one of the finest religious spaces of modern times.” It is nestled in a woodland setting rising eight feet into the sky. This magnificent wooden structure contains 425 windows and over 6,000 sq, ft. of glass.

According to David Bell’s review, whether it is the grandeur of the architecture or the power of prayer, this majestic place of worship continues to inspire awe and reverence. Over 6 million people and counting have been touched by this woodland sanctuary over the past 32 years of its existence.

In the outskirts of Eureka Springs, an exotic cat refuge Turpentine Creek Wildlife refuge provided an adventure in observing and learning about rescuing exotic cats. It has been voted among top 10 Arkansas attractions.

Most Big Cats rescued  were purchased as cute cubs by individuals who desired an exotic pet. As these animals mature, behavioral problems are inevitable because Big Cats are extremely dangerous and should not be left in private homes.

Since 1992, this refuge has been providing life-long quality homes for these animals. We took a guided tour with biologist/zoologist of 25 Big Cats and a bear, too.

Our final destination was Eureka Springs which is one of the most celebrated destinations in the Central U.S. for the art and cultural heritage traveler. It’s entire downtown has been placed on the National Register of Historic Places. We toured many of the 20 art galleries and saw the artwork of many of 200 working artists.

The natural beauty of the Ozarks and peaceful environment of this eclectic mountain community makes Eureka Springs a “good fit” for artists of all types.