Trovatore at the Metropolitan Opera 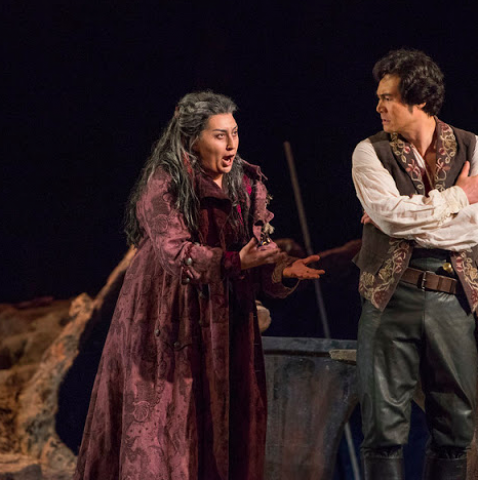 James Levine was not involved in Monday night's performance of Il Trovatore. (This is one of the revivals that the longtime conductor was removed from following a November story in the New York Post chronicling alleged inappropriate sexual contact between himself and a young music student in Illinois.)

His replacement was Marco Armiliato, a veteran, workmanlike conductor with a decade's experience leading this production. He produced his usual, prosaic reading of Verdi's most violent score. Armiliato is his own man and makes his own tempo decision. Stefan Kocan's "Di duel figlie" was slow, and the Anvil Chorus was fast and clumsy. After that, this listener focused mainly on the singers. Although Il Trovatore should explode with the force of a match tossed idly into a box of Canal Street fireworks, this performance took its time getting into motion. Jennifer Rowley (herself a replacement for an ill Maria Agresta) has a voice packed with tricks and trills that should make her a thrilling Leonora. Her Act I entry with "Tacea la Notte" was a snoozer, prettily sung but lacking in meaning and emotional depth. She was marginally better in the second and third acts which confine Leonora to ensemble scenes.

It was only in the fourth act that she delivered on this thrilling character, turning the triple play of "D'Amor Sull'Ali Rosee", the Miserere scene, and the fast "Tu Vedrai Che Amore In Terra" with some thrilling ornamentation. She went wonderfully, wackily over the top in her death, delivering her last lines in a demented crawl toward the prompter's box that proved to be almost as entertaining as her singing. With a little more confidence in the early act this will grow into a strong portrayal.

The same cannot be said for tenor Yonghoon Lee, who returns to the role of Manrico. This is a test for any Verdi tenor, veering between lyric outpourings and heroic nonsense like "Di quella pira." Lee hit most of the big top notes required for this macho character but his voice seemed to disappear every time he reached down into his chest. The result was a pallid Manrico who sounded (at important moments, particularly with Leonora) as if his voice was cutting out once it got below a certain pitch. However, while his chemistry with Rowley was sketchy at best, the Act II scenes with him and Anita Rachvelishvili  were marvelously sung and played.

Of all these singers, the one with the least enviable assignment was Quinn Kelsey, who had the unenviable job of singing Count di Luna in the shadow of the late, great Dmitri Hvorostovsky. Kelsey proved to be a pleasant surprise in this role, using the four-square meter of "Il Balen" to convince you that his character might almost be sane. His loony-goony performance in the last act was its core, in a world where all the characters are mad in some way, somebody has to be in charge of the asylum.

Since 1989, people have associated the role of Azucena at the Met with one singer: Dolora Zajick. While La Zajick is scheduled to take her final bow at the house with this role on February 6, it was up to mezzo Anita Rachvelishvili to convince in this role. Lovers of Verdi's mad gypsy mother had nothing to fear: it was all here. The emotion, the dementia, the high notes, "Stride la vampa", everything came together in a thrilling and attractive package. If Il Trovatore (as Caruso said) needs nothing more than the "four greatest voices in the world", it was her performance alone that proved worthy of that legendary quip.  (Reprinted with permission from Superconductor.)