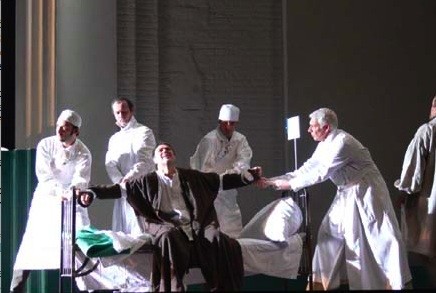 Galouzine as Hermann starts and ends in the mad house.

The Countess may or may not hold the secret of the three cards. 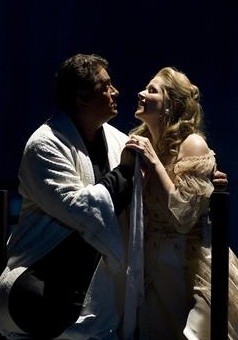 Seducing Lisa for not so nice reasons 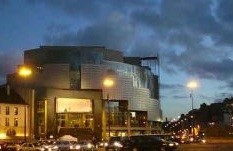 Opera is wonderful and in Paris too!

A mad Hermann staggers across his room in an insane asylum as the overture to La Pique Dame begins.  Pushkin ended his story on which Tchaikovski based his opera in Ward 17 at the Obukhov Hospital for the insane.  Lev Dodin sets the entire opera inside Hermann’s obsession, contained by the asylum.  The set is pristine.  Emotions high.  Dreams of cards, bank notes and gold coins flutter about the spare stage.

The back story takes place within the hospital, although the larger outside world is sometimes portrayed on a second tier balustrade that surrounds the room. Among the many advantages of the double level vision are duets sung vertically instead of the usual horizontal twinning. The set opens to let Hermann and us into the Countess’ grand imperial home and the ball scene.

Like Willy’s Decker’s Traviata set, simplicity allows the singing and the music to shine through, front and foreword.  Tchaikovski is star along with Dmitri Jurowski, conducting, and brilliant performances by every performer on stage.  For this Metropolitan Opera regular, the consistency is thrilling.  So too the stage direction in which performers move to the beat and line of the music, surely the best way to realize opera, but not often apparent in current New York Met productions.

Strong passions and a fiery imagination possess Vladimir Galouzine, a brilliant Hermann.  Musically he is perfect, carrying the opera’s dramatically relevant arias.  His dark timbre and the raw power of his voice are suited to a brooding, mad hero who is consumed by a compulsion to gamble.  He captures the spirit of the Pushkin tale in which Hermann is less in love with Lisa than obsessed by winning at cards. We don’t quite get the mutual blushes that flush Lisa and Hermann as they lock into their first stare.   Hermann’s secret and then not-so-secret obsession with gambling is this production’s emotional center.  Galouzine exhibits many strokes of genius including marvelous cresting lines.

Olga Guryakova captures Lisa’s shy and curious attraction.  Her transformation to reckless passion devolves perfectly into a final realization that she has fallen for a man who is mad.  She is full of voice with a subtle tremolo and ranges easily from sultry to agonized.  We should see more of her in New York, in Butterfly, Prince Igor, Ernani, Boheme, as Desdemona,  of whatever she’d like to do.  She debuted at the Met in 2001 in The Gambler.

Count Tomski as created by Evgeny Nikitin has a clarion baritone. As the genteel suitor, Prince Eletski, Ludovic Tesier electrifies in one of the opera’s loveliest arias as he woos Lisa.  He is both strong and caring in this hymn, contrasting to Hermann.  Varduhi Abrahamyan as Pauline is a delightful tease and Nona Javakhidze sang Masha  in an equally rich mezzo.

Dressed in a fabulous grey silk, with hip extensions suggesting her power and position, Larissa Diadkova is a magnificent Countess  She claims to have a secret, which she will keep unto death.  At 87, this woman, who once drove Richelieu around the bend,  falls for Hermann, but collapses and dies before she consummates her late life passion, taking her secret card sequence with her.  In this scene, some of Tchaikovski’s most radical music is conducted with spirit  by Jurowski, who also renders the muted string music of Hermann’s love, which precedes the scene, with a touching quiet.  He  captured Tchaikovski’s range in a children’s marching band with distant choir chants and extended side run rolls of the drum.

Returning to the madhouse after the Countess dies, Hermann dreams that she finally reveals the 3, 7, Ace order.  Slipping between dream and obsession works well here. Triumphing at the tables but not satisfied by the first winnings, Hermann persists until he loses everything.

Throughout the performance, many of the characters remain on stage as observers and non-participantts, watching proceedings in which they don’t take part.  Guryakova is fully within her role in these moments, including easier tasks like dancing blindfolded to the more difficult ones, where she never stands and looks, but rather attends at full awareness, reacting to the mise en scene unfolding before her.  She rose admirably to these demands, which in no way interfered with her gorgeous singing performance.

In this production Tchaikovski’s use of the story to conjure up a ghostly fantasy of a dream world of the past is realized.  The past is clearly present as Mozart is quoted and also appropriated direct.  For Tchaikovski, who first identified himself as a musician when he heard Don Giovanni,  Mozart consoles in a bleak modern world.  So too are we consoled during the dance sequence before the cruel confrontation in the Countess’ bedroom.

La Pique Dame remains a fixture in opera repertoire.  L’Opera National of Paris has presented it 43 times, and this production has been reprised 24 times.  It deserves to continue in this fascinating production staged to perfection.