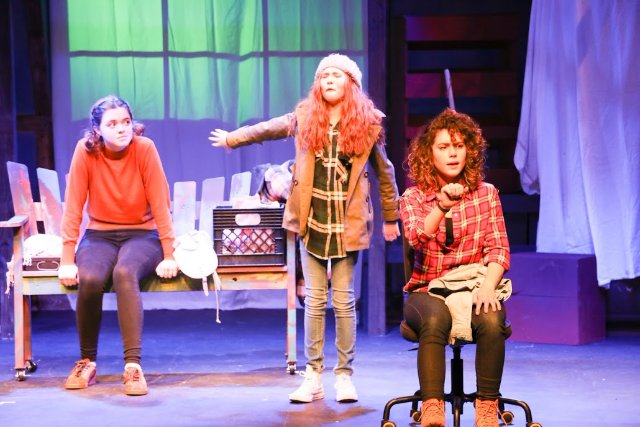 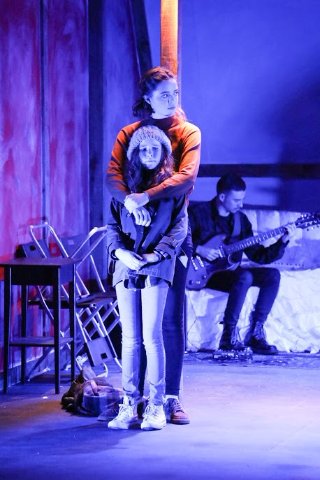 (Photo courtesy of Area Stage Company) Abigail Baldwin, as Carrie, performs the role of a protective older sister to Kate Markus' Sam. In the background is Giorgio Volpe, who created the play's score and performs music that underscores the action. 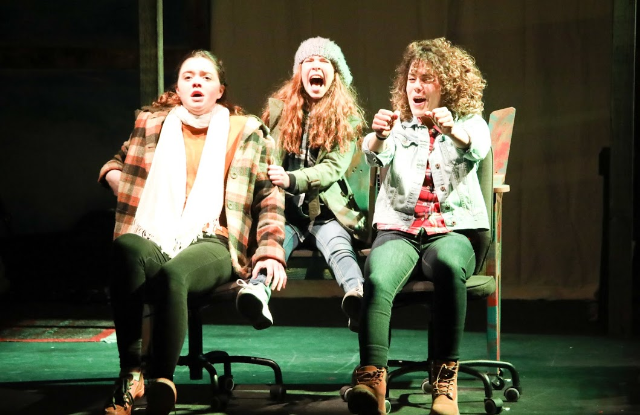 (Photo courtesy of Area Stage Company) Sam (Kate Markus, middle) can be unpredictable in various situations. Flanking her on either side are her older sister, Carrie (Abigail Baldwin) and Molly (Jackeline Gonzalez).

Stories about a long journey allow the playwright to focus not only on the physical trek but to metaphorically suggest an emotional transformation.

The characters might arrive at a better understanding of themselves or others by the time the trip is complete. They might ultimately change the way they think about the world and develop a new set of values.

Award-winning playwright Eric Lane’s relatable, touching, timeless and humorous work, Ride, centers on a car trip taken by three girls. But it’s also an emotional experience involving change. We witness the improvement of at least one relationship and characters coming to grips with, if not forgetting about, a painful past.

Folks can experience, along with the characters, their literal and metaphorical Ride at suburban Miami’s award-winning, widely respected Area Stage Company. ASC is presenting a mostly strong production of the play through Feb. 4.

Ride, a “coming of age” tale, calls to mind the 1986 film Stand by Me, about four boys on a long hike. While on their journey, they undergo a process of self-discovery.

Lane’s play also shares similarities with the 1991 movie Thelma & Louise. It’s about two women on the lam who, while on the physical getaway, also come to learn something about themselves.

In Ride, 11-year-old Sam, her older sister, Carrie and the older sibling’s teenage friend, Molly, escape their dysfunctional households. Molly, whose father is cheating on her mother, plans to exact revenge on the woman whom she believes is involved in the affair.

With the other girls as passengers, Molly mostly drives the brand-new car her father bought her as a way to make amends for his misdeeds. The precocious Sam, a self-proclaimed expert on maps, gives Molly directions. They’re not necessarily the correct ones. This is symbolic; her father and her cheating partner (Molly sarcastically calls her “Miss Smiley Face”) have discussed amongst each other what they perceive to be the teen’s faults.

“How about, if you’re planning on discussing me and my lack of direction and need for discipline, you can’t be fucking my dad,” Molly says, rehearsing a question she’ll direct toward “Miss Smiley Face.”

Gonzalez, sporting curly, wild hair that often covers her face, convincingly plays the young woman as someone who is spoiled. Her family’s more well-off than Carrie’s and Molly seems to live only for the moment.

Molly is also impulsive. Gonzalez’ performance builds to a fierce moment of impulsivity, during which she rushes toward her father’s lover (whom we never see) like a starving lioness might chase after a piece of meat. What ultimately happens symbolizes Molly’s transformation. It is one from impulsive, immature teen to a young woman with forethought and concern for others.

Sam, while precocious, is a hyper, fun-loving child, never missing out on a chance to act silly or show off; she’s quite a ham. Molly shares more similarities with Sam than she does Carrie.

Much to the older sibling's dismay, Molly is always ready to high-five Sam after one of her hyperactive moments.

She may only be 11, but Sam is a complex character. She’s afraid of death and danger and experiences vulnerable moments. Sam probably knows more about airbag safety than the latest fad among her sixth-grade peers. She also displays a caring side, insisting that her mom feed her pet while she’s on the ride with the older girls.

Real-life sixth grader Kate Markus, who played Sam during the reviewed performance, portrays the character effectively, for the most part. She fully inhabits her in a seemingly effortless manner, remaining in the moment throughout the play. The young actress transitions seamlessly from one personality aspect to another.

During two of the play’s most somber scenes, when Sam needs to convey her serious, emotional side, Markus could show more emotion. During other moments, she convincingly acts concerned or even afraid, as though Sam were an adult frightened about the latest worrisome information in the news.

Markus’ strongest acting comes when Sam is silly to the point of being obnoxious. She might remind you of your familiar but annoying and loud little sister, cousin or niece. You just want to scream “Shut up!!!”

Carrie, played with impressive naturalism, nuance, spontaneity and sensitivity by Abigail Baldwin, is genuinely concerned about her sister. You wouldn’t know it, though, from the beginning of the play. She conveys an eye-rolling familiarity and impatience toward her younger sister. But as the girls’ physical journey progresses, Baldwin’s Carrie grows closer to her younger sister. Under Giancarlo Rodaz’ sensitive direction and mostly smart staging, Carrie comes to convey a touching protectiveness and sincere concern for Sam.

Carrie, who writes in a diary, also has her own dreams and zest for life. It’s no accident that, in monologues addressed to the audience, she repeatedly talks about Anne from The Diary of Anne Frank.

For instance, Carrie whether everybody has their own secret annex. It should be no secret that many do in today’s unpredictable, often frightening world. Sometimes our hiding place is subtle. During Ride, for instance, Sam recalls her past with her father. The two used to sing “Mr. Scrubbie Song.” It’s one which describes the process of cleaning yourself with a brush. In a way, the song – and this fun, comforting process – is Sam’s “annex.” Sam can fondly recall the song and process, something that might make her feel safe and snuggly while thinking about, for instance, a perceived danger posed by air bags.

In keeping with the playwright’s suggestions, director Rodaz uses minimalism to create the world of the play. Her set design is mostly symbolic. The actors perform within an enclosed space. Only light filters through the windows. This reinforces Carrie’s belief that each of us has our own “annex,” allowing us to feel like we’re shutting out the dangers of the outside world. A white sheet covers part of the set, further symbolizing the notion of hiding.

The set is mostly bare bones. Chairs suggest Molly’s brand new, fancy car. There’s practically no scenery at any of the destinations. It’s a wise choice, allowing us to focus on the characters and their emotional journey. The set does contain a broom which is never used. This might send a relevant message: You can’t always easily “sweep up” a “mess” such as the one the girls created by running away. Even comforting Mr. Scrubbie might be no help.

Rodaz, who designed the set and lights, has created an overhead set of bulbs that display colorful lights. They move rapidly at times, suggesting a roller-coaster-like effect accompanied to loud music. This might be an expressionistic technique to illustrate the fear going through Sam’s mind. Music by Giorgio Volpe, who created the score and plays background guitar, effectively aids in underscoring moods, thoughts and feelings.

The colored lights are effective to a point. Their use during a scene in a cemetery, for instance, is highly questionable. The lighting is generally effective, but at times doesn’t allow us to see the actors’ facial expressions.

During the course of the play, the characters change clothes. This helps reinforce the transformation they’re undergoing. Curiously, Carrie, who isn’t as well off as Molly, wears more fashionable clothes than the other girl.

Rodaz nicely balances Lane’s humor with poignancy in this touching production that, from the get-go, makes us want to accompany these characters on their ride. There’s a staging issue in the beginning, during which the girls stand in one place for an extended period, making the action feel static. During this scene toward the beginning, they need to open up more to the entire audience.

Overall, though, you’ll be glad you hopped aboard this Ride.

Ride continues its journey through Feb. 4 at Area Stage Company, 1560 S. Dixie Highway in Coral Gables. Tickets range from $10 to $25. Performances are 7:30 p.m. Thursday through Saturday, as well as 5 p.m. Sunday. For more information and to buy tickets, visit www.areastagecompany.com or call (305) 666-2078.