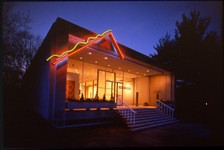 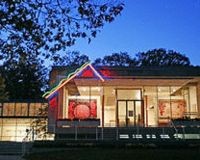 Times are financially bad, but this situation borders on unbelievable. The Trustees of Brandeis University have overreacted in a scandalous way to economic difficulties. With its contradictory headline, the startling Brandeis University Press Release reads:

WALTHAM, Mass., Jan. 26, 2009 -- Brandeis University's Board of Trustees today voted unanimously to close the Rose Art Museum as part of a campus-wide effort to preserve the university's educational mission in the face of the historic economic recession and financial crisis. Board members stressed that the museum decision will not alter the university's commitment to the arts and the teaching of the arts.

"These are extraordinary times," said Brandeis President Jehuda Reinharz. "We cannot control or fix the nation's economic problems. We can only do what we have been entrusted to do---act responsibly with the best interests of our students and their futures foremost in mind."

Opened in 1961, the Rose Art Museum houses a large amount of modern and contemporary art. Plans call for the museum to close in late summer 2009, and transition into a fine arts teaching center with studio space and an exhibition gallery. After necessary legal approvals and working with a top auction house, the university will publicly sell the art collection. Proceeds from the sale will be reinvested in the university to combat the far-reaching effects of the economic crisis, and fortify the university's position for the future.

Brandeis officials said the decision to close the museum is part of an emerging new vision for the university aimed at streamlining it for the future while bolstering its focus on undergraduates, the liberal arts and research. In recent months, the university has been reviewing expenditures and discussing new initiatives to meet the serious economic challenges. Belt tightening has already brought substantial decreases in administrative budgets.

In a special session on Jan. 22, the Brandeis faculty voted unanimously to support the president and trustees as they combat the effects of the economic recession and work to make Brandeis stronger academically and fiscally for the 21st century. Faculty members agreed that the university should maintain the strengths that have helped position Brandeis among the nation's top liberal arts and research institutions.

Brandeis officials have estimated that the economic recession will continue to adversely affect operating expenses, performance of the endowment, financial aid and scholarships. At Brandeis and schools around the country, fundraising revenue is declining and families are looking for more financial aid to help them cope with their own unenviable economic straits.

Reinharz said the Rose Museum decision was very difficult. But he characterized it as an important step in the ongoing resource management and allocation process on the school's campus. "I am satisfied that our commitment is unwavering; that someday we will look back and say that when the quality of education and student services was at stake, we made hard choices so that Brandeis could emerge even stronger."

Certainly, this press release could be picked apart--unwavering commitment to students, after necessary legal approvals, not alter the teaching of the arts, etc., but it is not the form of the message, but the message itself. The questions about this almost unbelievable situation flow. How can a supposedly top tier liberal arts institution sell its entire art collection? Is it even legal to do this with various wills, codicils and trusts involved in the donation of the art and collections?

How about those who over the past 48 years have given specifically to the Rose Art Museum? How were the donors' gifts set-up? What about artists or artists' estates who donated work to The Rose Art Museum? What were the terms of various gifts? For what use and purpose was this art and/or money to be put? In fact, in 2001, the Rose was substantially expanded by the construction of The Lois Foster Wing designed by architect Graham Gund. Certainly, besides the Foster family, there were other major donors as well. It would seem that there might be a lot of lawsuits filed over this situation and all of its various near cataclysmic aftershocks.

Also, the art market is really, really down. Last year's sales at Christie's and Sotherby's combined were almost a third of the previous year's sales. So, could there be a worst time to de-acquisition a 6000 object art collection? Who thinks that this art will realistically sell for the high estimate--$350 million? Did any of the Brandeis Board of Trustees actually think through any of these points in a long-term way?

And the students who came to Brandeis University to study art or art history? What about them? Will they transfer? Will they file lawsuits? Supposedly, Brandeis checked with the Commonwealth of Massachusetts about the viability of what they are doing. Not really. The Attorney General's office says it was only informed, did not issue an opinion and will definitely investigate. There has been no ruling made by the Internal Revenue Service (IRS) as of yet. The Feds will certainly  slow things or shut them down as well. Who came up with this idea? It just gets more and more knotted.

Brandeis University touted the The Rose Art Museum as the finest collection of contemporary and modern art in New England. At the very least, The Rose Art Museum was considered one of the best university or college contemporary art collections in the country. Its stated mission was "to seek to engage its communities in experiencing the significant art, artists and ideas of our time." No more. Perhaps, nevermore.

Already, there is a petition online for Brandeis University alumni to protest and overturn this draconian decision:

In Opposition to the Closing of the Rose Art Museum

The Brandeis University Board of Trustees and Administration

"The Brandeis University Board of Trustees in a closed meeting and without any community input decided to sell off the University's unique collection of modern art in order to meet a budget shortfall. But there are other ways to do this. The Rose Art Museum must be preserved.

We find unacceptable both the decision to close the Rose Art Museum and the manner in which the process was conducted. While we understand the dire circumstances the University is facing during this economic crisis, we deplore this utter lack of transparency and the auctioning off of Brandeis' cultural heritage. If the purpose of this sale is to position the University to exit the crisis stronger, we fear that the loss of prestige and morale it entails will have the opposite effect.

Frequent, informative communication builds constituent confidence, and there has been too little of both since the economic downturn began. Giving up the largest collection of modern art in New England belies the fact that the Brandeis community does indeed value the arts. It betrays the University's very mission and our collective responsibility to preserve this treasure.

As alumni, we cannot in good conscience support an institution that does not trust its constituents enough to keep them informed of such painful undertakings. An e-mail, no matter how regretful in tone, sent after the decision has already been made does little to alleviate our confusion, hurt, and resentment. As your actions in regards to the Rose demonstrate, your concern for the short-term trumps the long. Therefore, the undersigned pledge to withhold our support of Brandeis University until our concerns are addressed and the decision to shut the Rose Art Museum is reversed."

In just a few hours, well over 2000 alumni had signed the petition. Another general petition is being circulated as well. Student sit-ins are planned. Artists, students and donors are furious. This story certainly will have legs and major ramifications. How will this effect potential giving to other university museums? If this is allowed to stand, who will want to donate art or money to a college museum? Stay tuned for follow-up stories. Truth is often stranger than fiction. At Brandeis University, the Philistines are not just at the gate but are actually running the institution.