The Collegiate Chorale's Rousing State of the Union 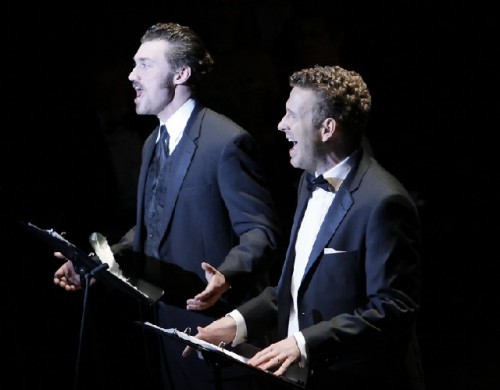 Bryce Pinkham and Benjamin Davis, as Brom and his aide. 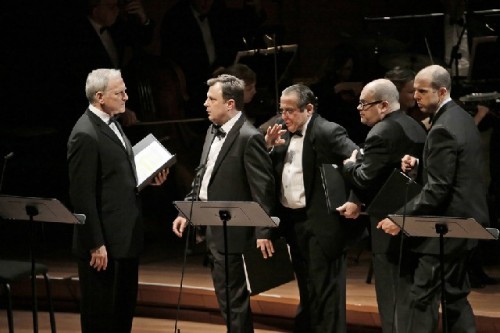 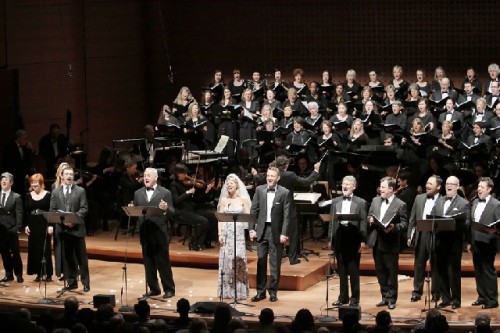 The Cast of Knickerbocker Holiday and the Collegiate Chorale

A marriage proposal somewhere between May and December.

Ted Sperling directed a first rate concert staging of Knickerbocker Holiday with music by Kurt Weill and book and lyrics by Maxwell Anderson.  This was not a rebuttal to the State of the Union address being delivered at the same time by the President in Washington. But it sure showed that as we used to say, until George W. Bush banned French, plus ça change, plus c'est la même chose.

The Chorale was in top form as the citizens of Nieuw Amsterdam, including the town crier.  An all star cast told us what it’s like to be American – the defining characteristic, an inability to take orders.  What do we have to do to have good government? Elect amateurs.

While Democrats and Republicans were holding hands and John Boehner held back tears as the President orated, Governor Peter Stuyvesant arrived in New York to take control of the new Dutch colony.  Something resembling a City Council was having trouble finding someone to hang (plus ça change), and also wondering how they were going to continue to profit from the illegal sale of arms and alcohol to Indians (plus c'est la meme chose).

Would they be able to continue if the Governor caught them?  What did his arrival mean?  How many times have Charles Rangel, Tom de Lay and Christopher Dodd asked this question?

James Bagwell, who conducted the chorus and orchestra, held the disparate elements together as he moved through Broadway tunes to the lovely melodies, harmonies and intervals we associate with Weill. Weill could not understand Schoenberg, who was willing to wait fifty years to be appreciated.  He wanted a receptive audience in his here and now, and he got it.

Vincent Garber’s rendition of "September Song" brought down the house.  In the original production, cast members wondered why Tina preferred the much younger Brom, they were all so taken by the old Governor’s charm.  Garber mesmerized us too.

More recently things have improved for the old politicians: Newt Gingrich got the choir girl and Dennis Kucinich gently dislodged his wife from the cradle.  It probably took more than "September Song."

The bipartisan seating for the President’s speech left him looking eagerly from left to right for an enthusiastic response.   Peter Stuyvesant did not have this problem.  He was a tyrant and always looked to us, the audience, for approval.  He had the town under control.

Franklin Delano Roosevelt, who playwright Anderson was attacking for his dictatorial ways, saw the musical during previews in Washington.  His reaction is not precisely known, but he is reported to have laughed at a character named Roosevelt.

Kelli O’Hara belted out her songs beautifully.  The tenor Ben Davis, who played Brom, is referred to as a crossover between opera and musical.  In the lower registers he sounded perfectly suited to the Broadway stage.  In the upper register, his texture was rich and lyric, and any Puccini role would suit him for sure.  Supporting cast members were all delightful.

One thing was clear: the state of the union has not changed much since Manhattan was Nieuw Amsterdam:  good people are in jail and the robbers roam free, we yearn for our 'ancient liberties'. Politicians promise full employment, high wages and low prices but have no idea how to deliver all three.  And so on.  Delightful, amusing and a tad sad.

If we have to never change from our roguish American ways, I do wish we could follow Knickerbocker Holiday’s suggestion for a small, fun government run by amateurs.  Everyone on the stage at Alice Tully made it look possible and desirable.  This was a terrific production and a fresh way to look at the state of our union.