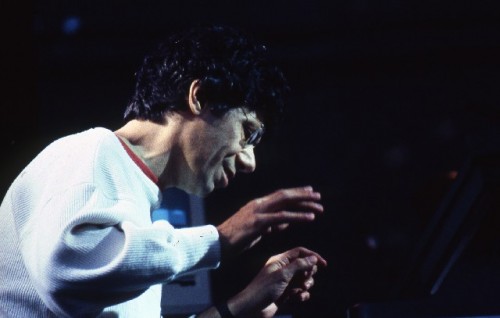 Chick Corea will perform at Tanglewood this summer. Giuliano photo.

And then there was none.

For the past several Labor Day weekends we have enjoyed the annual Tanglewood Jazz Festival.

With the BSO packed and back in Boston the event has struggled as a kind of postscript of the season. While it seemed that the festival had held its own ticket sales were less that robust.

Now the event has been cancelled.

Under founding producer, Freddie Taylor and then Dawn Singh, the series was noted for artistic integrity. There was a compelling mix of established artists and a commitment, in the lively lunch and dinner concerts in the Jazz Tent, to highlight emerging artists.

It was my great pleasure to be invited to MC a couple of the Tent concerts. And I even had the chance to introduce Paquito D’Rivera on the stage of Ozawa Hall.

So the loss of the festival is deeply personal.

There is a wonderful intensity in a festival setting. You get to hang out with peers and like minded folks. On the hallowed grounds of Tanglewood to celebrate Jazz, America’s great indigenous artform.

Over the past few months, in  preparation for a new play Satchmo at the Waldorf written by Wall Street Journal drama critic, Terry Teachout, and starring John Douglas Thompson I have been deeply involved with research. This entails reading Teachout’s book Pops a Life of Louis Armstrong and listening to the music of Armstrong and his peers in the 1920s.

The absorbing project has renewed respect for the uniqueness and resonance of such a great artistic legacy.

But in contrast to its commitment to classical music, Tanglewood and the BSO, have focused on the bottom line and not the historic and aesthetic heritage. Jazz is still regarded as a popular artform and, as such, must respond to the dictates of the marketplace.

This follows a general trend of diminishing the role of the arts and music in schools. Or, at the professional level, the decision to greatly reduce the number of categories for Grammy Awards particularly in the spectrum of blues, jazz and ethic music.

In an era of cutbacks and calls for freemarket initiatives it is not the right time to subsidize indigenous art forms as the aesthetic equivalent of protected species.

For Tanglewood this is surely a difficult decision. The BSO has deep but not bottomless pockets. So this came down to a business decision.

Thanks for the memories. They are awesome and for that we are truly grateful.

But in 2012 there will be interesting and welcome other options.

In 2010 Herbie Hancock appeared at Ozawa Hall with mixed results. The out there performance by the then 70-year-old pianist pleased many and disappointed others. There were mixed reviews among media mavens and aficionados.

Legendary pianist, Chick Corea, will perform in Ozawa Hall with vibist Gary Burton and the Harlem String Quartet on August 26 at 8 p.m. Corea is another of the handful of A list jazz artists who have appeared at Tanglewood in the past decade. Tony Bennett in the Shed and a sold out appearance by Sonny Rollins in Ozawa Hall were other memorable events.

Bassist Christian McBride and his trio of Christian Sands and Ulysses Owens, Jr. will appear in Ozawa Hall on August 19 at 8 p.m.

So that’s two strong bookings, on consecutive Sundays, generally an off peak time for Ozawa Hall. But, significantly, still within high season. This may be an area that Tanglewood is exploring. The success of these bookings will have implications for years to come.

Of course we may only speculate on what the BSO plans for the now vacant Labor Day Weekend. Instead of a troubled and struggling Jazz Festival in Ozawa Hall there may be the option to blow it out with a rock event in the vacated Shed.

Depending on who is available and at an affordable price, well, don’t be surprised.

Having a strong finish to the 2012 season may be an incentive for the BSO’s bottom line.

Opening the season with James Taylor just might be the leverage to bookend the program with a similarly appealing pop event.