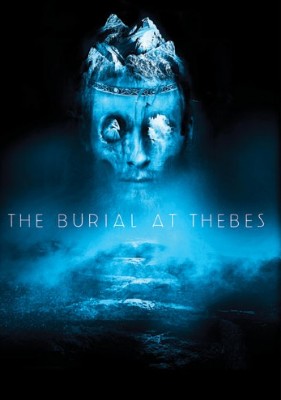 The Burial at Thebes, where lighting is crucial. 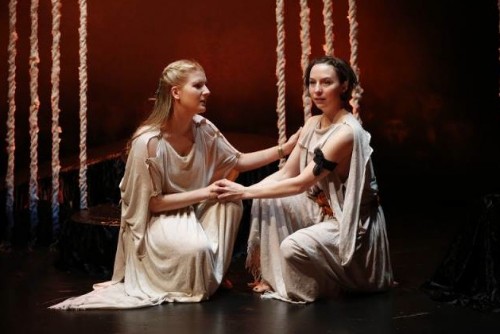 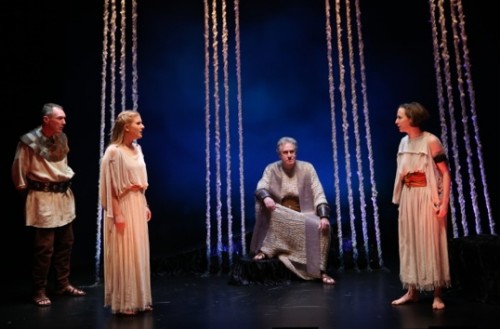 The Burial at Thebes

Charlotte Moore has directed The Burial at Thebes to make it not only timely, but  even more important, present. Each character is etched individually and then brought together with loved ones and adversaries, incidental characters and crucial ones. The chorus has disappeared, its lines and messages now humanized in individuals.  This tale is about people and the gods are hardly considered.

Antigone and Creon are set up as two extremes here. Antigone is young, but passionate and determined. Rebekah Brockman has an unusually intense face and arrests with her gleaming eyes and long arms. She needs to bury her brother who was on the wrong side of King Creon.

Brockman is intensely feeling, single-minded in her devotion to family, willing to defy the city and death defying.  Her case is complicated by her incestuous birth.

Creon does not care about family love and duty. He is overbearing in his adherence to the laws of the state, which also happen to be his laws.  Seamus Heaney, the Irish poet, interpreted Antigone in response to the Bush administration’s invasion of Iraq and toppling of its dictator. This is of current interest in the US, because Hillary Clinton, who is campaigning for the Democratic nomination for President in 2016, voted with Bush.

As the philosopher Hegel discusses the dichotomy between Antigone and Creon, he also suggests a muddy middle ground, in which love of family becomes intertwined with adherence to the law. The other characters in the play, who stand in for the chorus in this production, are all caught in the web of ambiguity.

Colin Lane as the guard enters in the full garb of his character. He quivers to his finger tips, dancing with nervous energy as he delivers the bad news to the King. In defiance of orders, the body of Polyneices is being buried. As he expected, Lane’s character is in seizure state for reason: The messenger will be blamed for the message.

Eurydice, Creon’s wife, is another of those completely satisfying actors. While her lines are few and beautifully delivered, it is the attention Winsome Brown pays to everything that is happening around her that arrests. When she starts on her “Glory” verses, the poetry recalls Gerald Manley Hopkins “Glory be to God for dappled things,” rhapsodic and wrenching.

Ismene, the sister, who would share culpability is played with surprisingly stiff conviction by Katie Brogan, who at first is shocked by Antigone’s willingness to defy the King and then insists on joining her in the punishment, buried alive in a cave so that the sympathy of the citizens of Thebes cannot reach her.

Ciarán Bowling as Creon’s son and the fiance of Antigone on first blush seems too young to face a choice between his father and his loved one.  Yet Bowling rises to the conundrum. When he is unable to convince his father that the law may be flawed, he chooses death instead of compliance.

Everyone knows the conclusion of this play from 440 B.C.

The sets by Tony Walton are perfect. Simple chords descend in four groupings and are lit like columns. The lighting on the backdrop changes as the play darkens. A platform for the King is made of rocks on which he must climb to bear witness to the havoc he has wrecked.

The music, which is very much embedded in Heaney’s language, is also articulated at the play’s opening. Brass declare the end of war and the beginning of the death of the principals.

The Burial at Thebes is a shining example of their first rate productions.