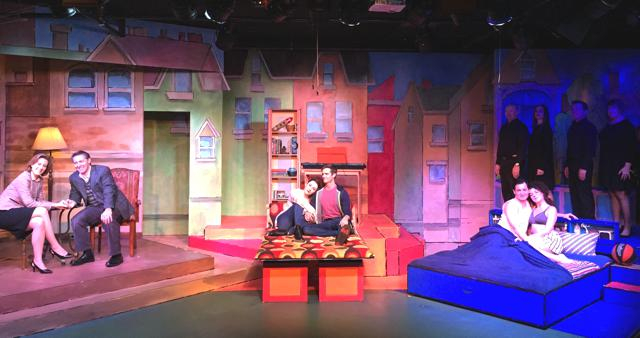 The entire cast of BABY 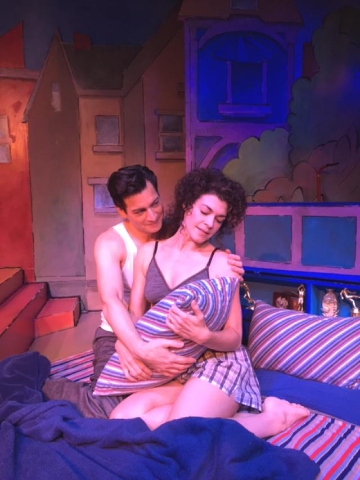 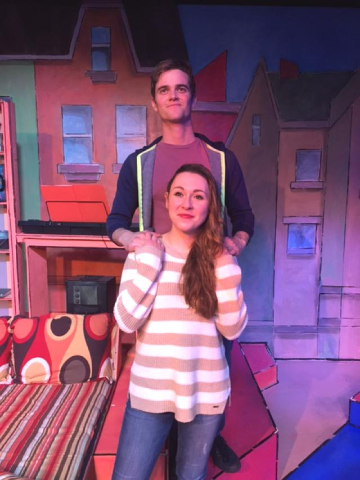 Artistic director Ron Celona has a penchant for finding and directing winning productions for his intimate 88-seat, At  venue.  He has yet to meet a challenge he and his outstanding technical team can’t overcome.

Their current production of “Baby The Musical”, is a case in point. This creatively performed musical, directed by Celona, boasts a cast of ten highly talented singer/actors that shine in the intimate staging space of CV REP.  In addition, the production also features four, live off-stage musicians, under the first-rate musical direction of Scott Storr.

Most of the audience on opening night probably didn’t know that this fabulous little musical gem was written back in 1983, running for a year on Broadway, nor did I.  If one does remember it, then you’ll be pleased to know that a couple of tweaking, and updating features  – a  new musical number here and the dropping of a couple there, plus a fresh feel to the libretto to go along with Shires’ wonderful score and Maltby’s ingenious lyrics –  have enhanced the overall enjoyment of this production.

The time is the present and the place is a college town. Three appealing couples, each newly expecting a child, have different but familiar reactions to their coming blessed event. The “Millennials”, Lizzy and Danny wonderfully played and sung by Melody Hollis and Caleb Horst, are university juniors who have just moved in together.  The “Generation Y” couple, Athletic Pam (Erica Hanrahan-Ball) and her sports instructor husband, Nick (Perry Ojeda), have had some trouble conceiving. The Generation X couple Arlene (Janna Cardia) and her husband Alan (Tom Andrew), already have three grown daughters.  Arlene, unsure of what to do at age 40+, is contemplating an abortion while Alan is thrilled with thought of a new baby. There are many poignant and compelling moments in this insightful production that really resonate with the audience.

All productions today should be so lucky as to be blessed with an ensemble cast of singers that can act like those in “Baby The Musical”.  Not only are all the three couples always in the moment with each other, there is an on-stage chemistry that leaps over the footlights into the audience that keep us totally engaged as well.  It’s almost palpable and it’s infectious.

As way of a bonus for the senior citizen crowd, the only four letter word you will hear in this production is ‘love’.  And as composer/lyricist Burt Bacharach wrote years ago, “What the world needs now, is love, sweet love”, is so right on the mark.

Theatre in all its forms is a collaborative effort.  The story, in addition to its stars, features a ‘Greek chorus’ of four performer/singers, who not only provide the audience with background, but also get the opportunity, as various comedy characters, to join in the fun, as well. This ensemble includes: Jaci Davis, Joseph M. Dahman, Giulia Ethel Tomasi, and Jeff Stewart.

A great deal of the credit for this crowd-pleasing production goes to director Celona, who does a tremendous job of ‘traffic management’ with the daunting quick scene and set changes required to make those multi-locations scenes go smoothly and seamlessly.

Also credit goes to Set Design wizard Jimmy Cuomo, and lighting designer Moira Wilkie Whitaker for creating enough space and illumination touches that allow the actors and singers to perform their magic. Under musical director Scott Storr’s baton and piano, the musical features local professionals who can be seen in venues all over the Coachella Valley. They are: Danny Gutierrez; on keyboards; Dave Hitchings on percussion; Doug McDonald on guitar and Bill Saita on Bass.

“Baby The Musical” is a terrific production that produces insight and knowing smiles as it entertains its audiences.  It performs at CV REP Theatre in Rancho Mirage, and runs through February 12, 2017. Call the box office for reservations and ticket information at 760-296-2966.