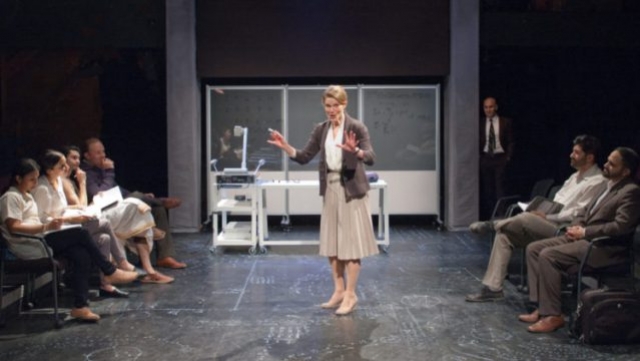 Ruth (Juliet Hart) lectures on the work of Ramanujan. Photo by Lara Goetch. 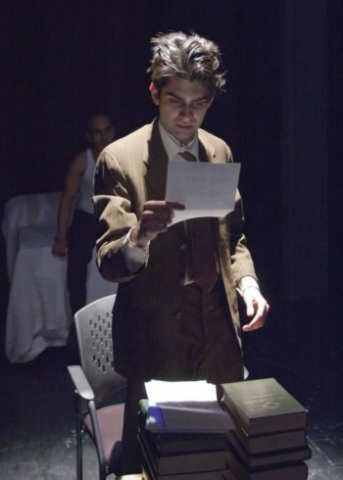 Rajan as Ramanujan at Cambridge.

A Disappearing Number is a multi-layered, complex story of love and math over the course of a century. Timeline Theatre’s new production of the script by Complicité is mesmerizing, sometimes mystifying, and definitely worth your time and attention. Even if the math makes your head hurt. It is a joyous intellectual brain-teaser.

The story of the Indian math genius Srinivasa Ramanujan—who went from being a clerk in Madras in 1913 to work with a renowned mathematician in Cambridge—is told in a series of overlapping vignettes, beautifully choreographed by director Nick Bowling. Video and other electronic projections greatly enhance the production and our understanding of the math.

Anish Jethmalani serves as narrator to introduce the play and also plays Aninda Rao, a modern physicist specializing in string theory. As narrator, he notes that although the actors and story are not real, the mathematics is real. “And it’s terrifying.”

In the modern era, a mathematics professor named Ruth (Juliet Hart) studies Ramanujan’s work and meets Al Cooper, a business executive who manages hedge funds (Kareem Bandealy). They fall in love and get married, even though Ruth is frustrated that Al doesn’t understand why her phone number (1729) is an important number. (We learn that later from Ramanujan.). Al just knows that Ruth is beautifully incomprehensible. Their life together—a series of missed connections because of their frequent travels to other countries and technology glitches—ends in tragedy.

Ramanujan (Siddhartha Rajan) is a Brahmin who follows Brahmin dress and practices. Aninda Rao explains: “All his life he wore the dhoti, his hair in the kudumi, and always the very important Brahmin string, whose three threads symbolize body, mind and soul inextricably entwined.” He adopts western dress in Cambridge. He suffers from the London cold and difficulty in maintaining a nutritious vegetarian diet. He contracts tuberculosis and dies in England in 1920 at the age of 32.

Professor Hardy (Dennis William Grimes) mentors and supports Ramanujan, a self-taught mathematician. They work together, but the younger man is an intuitive thinker who finds it hard to meet the mathematics academy’s requirements for providing proofs for his work.

These pairs of lives a century ago and in the modern era are woven back and forth, with characters from both eras sometimes sharing a scene. Meanwhile Aninda Rao speaks at conferences and provides context for the world of mathematics (including prime numbers, “the bones of mathematics”), the Brahmin culture and Ramanujan himself.

An example of Ramanujan’s intuitive genius comes near the end of the play. Professor Hardy comes to visit him in the hospital and reports that “The number of my taxi-cab was 1729. It seemed to me rather a dull number.” But Ramanujan says no, 1729 is a very interesting number. “It is the smallest number expressible as the sum of two cubes in two different ways.”

Bowling’s production of A Disappearing Number is cleverly staged and he directs an excellent cast, with choreography directed by William Carlos Angulo. Original music by Ronnie Malley, Bob Garrett and Mikhail Fiksel is performed by Garrett and Malley at alternating performances. Sound design is by Fiksel. William Boles created the scenic design (highlighted by eight chairs that become classrooms, taxis, trains and airplanes) with projections by Rasean Davonte Johnson.

A Disappearing Number, devised by Simon McBurney and his company Complicité, premiered in London in 2007. The story of Srinivasa Ramanujan also received visibility from the 2015 film, The Man Who Knew Infinity, starring Dev Patel as Ramanujan and Jeremy Irons as Hardy.

Before the play started, Timeline’s artistic director, P.J. Powers, explained to us that it was ok if we joined him in fearing math. Mathematical knowledge isn’t necessary to appreciate A Disappearing Number.

As a creative myself, I was never afraid of math. I just ignored it in high school and college. I preferred language, lit and social sciences. But as a professional working for a high-powered management-consulting firm, I learned to love data and to build arguments for the presentations, papers and books created for consultants by our marketing department. I often had to write descriptions of math-based arguments—but no fear, I had a secret weapon. My go-to person was my son, a mathematician, economist and PhD in econ from the University of Minnesota. He helped me understand regression, chi-squares, correlation coefficients and probability and explained microeconomic theories more clearly than the professor from whom I took a course in microeconomics. (I got a respectable graduate student B in micro.) So with that caveat, I can say, happily, I love numbers.

A Disappearing Number continues at Timeline Theatre, 615 W. Wellington Ave., through April 9. Performances are Wednesday-Sunday. Tickets are $38-51. Buy them online or by calling 773-281-8463.