At Shelton Theatre in San Francisco. 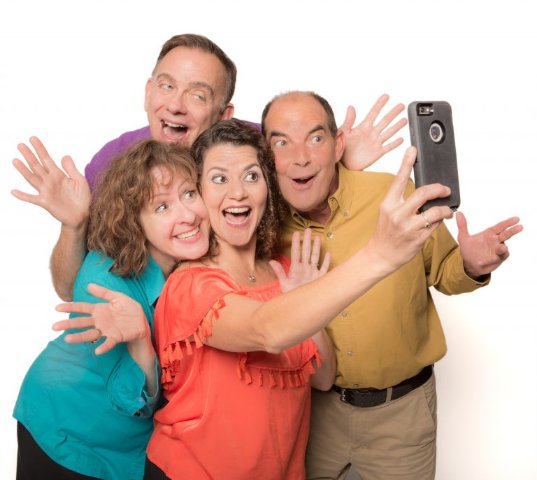 Technology is pervasive in daily life – so much so that it may take a little reminder like “Megabytes! The Musical” to put it all in perspective. This 60-minute song and laugh fest touches all the right nerves, assuring us that we are not alone in responding to butt calls; feeling technologically inferior to an 8-year-old; and suffering anxiety in sending an email that we know will remain in the archives forever.

Playwright and composer Morris Bobrow is the master of what San Franciscans might consider the Pier 39 musical, a light but entertaining diversion. His previous compositions include “Shopping! The Musical” and “Foodies! The Musical.” Can anyone detect a common theme here? In “Megabytes!,” Bobrow adeptly carves out the many impacts of technology in personal use as his target. He exposes our dependencies, our awkwardness, and our occasional rewards in a world of challenge and change.

This production is structured as a musical revue of 25 independent sketches that lacks a narrative arc. Anyone looking for a sophisticated, provocative play with plot or character development should look elsewhere.

The skits are pretty uniformly funny and they relate to technology in a way that we all have experienced and can comprehend. Ever been disappointed that your social media postings are being ignored? Got it. Been disrupted by nearby cell phone talkers loudly sharing their innermost secrets? Got it. Have your attempts to Photoshop your picture made you look more like W.C. Fields than Cary Grant? Got it. But a personal favorite skit, “A Religious Experience,” is designed like an infomercial. It promotes a mobile app, “Priest in Your Pocket,” that gives absolution over the phone and saves the user from those nettlesome drives to the church. Works for me!

The composer’s lyrics are quite clever and humorous, accompanied by peppy music with an occasional bluesy interlude. While the issues of dealing with these technologies may be 21st century, the music seems to borrow heavily on the ’50s and ’60s light pop and show tune genres. Several songs seem inspired by familiar sources. For example, “Customer Support,” which deals with the annoyance of a service representatives asking the customer for high survey ratings, echoes the feel of “Beauty School Dropout” from the musical “Grease.”

With revues, simple staging is generally the norm, and this show is no exception – stools, computer-themed backdrop, some costume changes, and variable lighting. Four talented and energetic performers, David Goodwin, Kim Larsen, Lisa McHenry, and Deborah Russo, share the stage in solos and various ensemble groupings. All are veterans of previous Bobrow productions, so their skills are well matched to the material.

“Megabytes! The Musical” by Morris Bobrow is produced by Shelton Theater and plays on their stage at 533 Sutter St., San Francisco, CA through March 3, 2018.