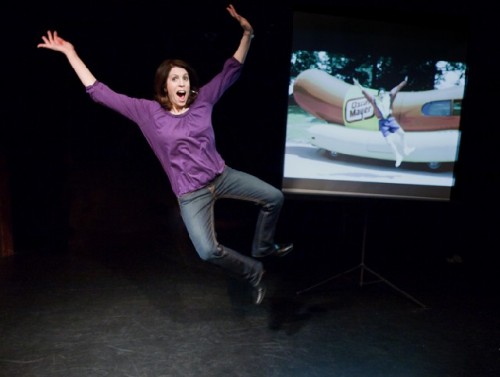 WAM Theatre announces Spring 2011 events including a 24 hour theatre project across state lines, an ensemble presentation exploring feminism in the lives of young women today and a festival of solo works written and performed by women to benefit the training of at least one community midwife at Edna’s Hospital in Somaliland.

After a successful inaugural season in 2010 that included producing ‘A WAM Welcome’ and ‘Melancholy Play’, WAM Theatre is pleased to announce the first three events of their 2011 Season.

Kristen van Ginhoven and Leigh Strimbeck, co-Artistic Directors of WAM Theatre state, “We are thrilled with the success of our 2010 Season. Thanks to the support of our communities, our donors and our audience members, we successfully implemented our double philanthropic mission; to produce theatrical events for everyone with a focus on women theatre artists and/or the stories of women and girls, and to donate a portion of the proceed from those events to organizations that lift up the lives of women and girls.  WAM Theatre's donations in 2010 totaled $2500 to two beneficiaries, Women for Women International and Women’s Fund of Western MA. We look forward to more opportunities to use theatre to benefit women and girls in 2011.”

First, on March 14, WAM Theatre will present ‘I’m not a Feminist, but…’ with a portion of proceeds being donated to Berkshire Women for Women Worldwide. This event is part of the Berkshire Festival of Women Writers and will take place on Monday, March 14 at 7:00pm at New Stage Performing Arts, 55 North Street, Pittsfield, MA.  ‘I’m not a Feminist, but…’ explores the topic of feminism in the lives of young people today: do they identify as feminists?  Why or why not?  How has feminist history impacted their lives? The performance was written by Russell Sage college women working with director Leigh Strimbeck (co-Artistic Director of WAM Theatre), and looks at the topic of feminism with humor, irreverence, dance, song, and serious real-life monologues.

Featured in the O Solo Mama Mia Festival are the following pieces:

Based on the true story of an insecure goody-goody who overcomes years of bullying and finds redemption and her true voice behind the windshield of the Wienermobile. Using music, video and photo footage from her life on the hot dog highway, comedian Robin Gelfenbien tells the story of her transformation from underdog to “one of the most notorious Wienermobile drivers of all time.” (Time Out New York). “4 stars” (Time Out New York) “The highlight of next month’s Fringe Festival” (New York Magazine) Written and performed by Robin Gelfenbien. (An excerpt from this show was part of our inaugural event, ‘A WAM Welcome’)

Not a coming out story, but not not a coming out story, ‘How To Be A Lesbian in 10 Days or Less’ is a dynamic workshop led by teacher and motivational speaker Butchy McDyke that will help you become the “best lesbian you can be!” Writer and performer Leigh Hendrix links unique characters, personal story, and a Reba McEntire song in a mostly funny and sometimes earnest exploration of how you can learn to con?dently shout, “I’m a big ‘ol dyke!”

This one-woman, group-therapy comedy about depression is a sideways safari through loss, displacement, dementia, depression and the surprise healing nature of upstate New York.  A ‘depressively experienced’ actress turned therapist leads group therapy in an attempt to provide helpful advice and therapeutic modalities to other ‘stressfully afflicted’. Art Therapy with Balloon Animals, Affirmations on Post-it notes and Primal Humming are some of the hopeful remedies. Written by Camilla Schade and Kira Lallas, and performed by Camilla Schade.

WAM Theatre is still in discussion with some artists about possible other shows for the festival. For more information about WAM Theatre’s 2011 season, please go to www.wamtheatre.com


About WAM Theatre:
WAM Theatre is a theatre company based in the Berkshires of Massachusetts and the Capital Region of New York State. Inspired by the book ‘Half the Sky: Turning Oppression into Opportunity for Women Worldwide’ by Nicholas Kristof and Sheryl WuDunn, WAM Theatre was founded in 2009 by professional theatre artists Kristen van Ginhoven and Leigh Strimbeck. WAM’s philanthropic mission is two-fold; first, producing theatrical events for everyone, with a focus on women theatre artists and/or stories of women and girls; second, to donate a portion of the proceeds from those events to organizations that benefit women and girls.www.wamtheatre.com