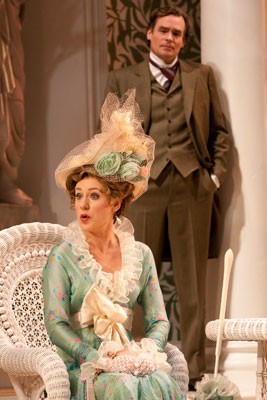 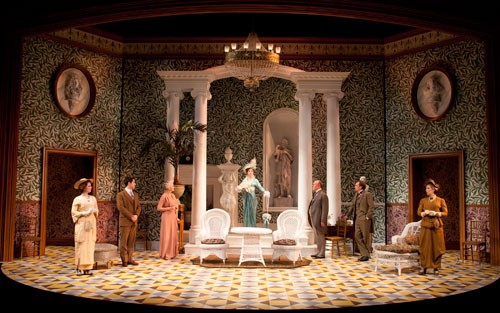 The production is directed by Nicholas Martin former artistic director of the Williamstown Theatre Festival.

It’s been fifty-six years since George Bernard Shaw’s “Pygmalion”, the wonderfully witty and misogynistic stage play about English society and its language, became the basis for one of Broadway’s most endearing musicals… “My Fair Lady”.  The “Pygmalion” story, sans the wonderful music of Frederick Loewe, and the brilliant lyrics of Alan Jay Lerner, still has the insight and Shaw’s love of the language that continues to resonate with today’s audiences one hundred years later.

Shaw, a Nobel laureate in Literature had legions of fans and admirers.  He also had battalions of detractors. But admirers and detractors alike agree the irascible Irishman was a brilliant writer and innovator.

“Pygmalion”, the sparkling comedy production on the Old Globe’s Shiley Stage, stars Robert Sean Leonard of TV’s “House M.D.” as Henry Higgins.  The production, steadfastly directed by Nicholas Martin, co-stars San Diego favorite, Paxton Whitehead as the redoubtable Colonel Pickering and Charlotte Parry as Eliza Doolittle. Parry’s Eliza is one of the best Eliza’s seen on any stage in a long time.

(Nicholas Martin is familiar to BFA readers as the former artistic director of The Huntington Theatre followed by the Williamstown Theatre Festival.)

The story in short (in case you’ve been living in a cave for the last 100 years), deals with a speech professor (Leonard) who makes a wager with Pickering (Whitehead) that he can pass off a common Cockney flower girl (Parry) as the pinnacle of English society. The storyline is enduring and engaging and is one that has been reinvented over and over through the years.

In addition to its long life on the stage, the play was adapted for the screen by Shaw himself, in 1938 with Leslie Howard and Wendy Hiller, as Higgins and Eliza.  And was adapted again, most famously, as the blockbuster stage musical in 1956, which ran for a then record 2,717 performances, and starred Rex Harrison with Julie Andrews on Broadway and Harrison and Audrey Hepburn in the movie version.  In a somewhat ironic side bar note, the 1956 Moss Hart directed musical “My Fair Lady”, hewed more closely to the 1938 screen version than to Shaw’s original stage play.  The Old Globe’s production, under newly appointed Associate Artist and play director Martin, however, is a faithful rendering of Shaw’s 1913 stage play.

Once the opening night jitters vanished midway in the first act, the cast got down to business and fully engaged the audience.  In Act II, everyone is at full throttle, and Shaw’s “non-love” story between Higgins and Eliza veers into familiar Shaw territory – the war between the classes and the clashes between men and women.

Leonard turns in a solid performance (with occasional accent lapses) as Professor Higgins, the supreme misogynist and the verbal speech teacher from Hell. Parry shines in a spot-on performance as Eliza.  She brings, not only a proper street vendor quality early in her portrayal, and displays a dignity later on, albeit created by Higgins, which gives her an inner glow that he can’t fathom.  When Parry is on stage all eyes are on her.

Kandis Chappell brings an imperious, yet classy, style and wit to her performance as Mrs. Higgins, and Deborah Taylor as Mrs. Pearce offers wisdom and motherly advice as Henry’s housekeeper, to both Eliza and Higgins.  The supporting players all deliver nicely judged performances in this seamlessly directed Shavian master-work.

Martin’s creative team has provided a functional scenic design by Alexander Dodge that provides plenty of space to create three set locations, and a lighting design by Philip S. Rosenberg, which allows the costume designs of Robert Morgan to be fully appreciated.

Welcome to the Old Globe Theatre’s new Artistic Director Barry Edelstein who looks to be the beneficiary of this winning production as he now begins to shape this season and future seasons under his aegis.

Resposted with permission of Jack Lyons and Desert Local News.